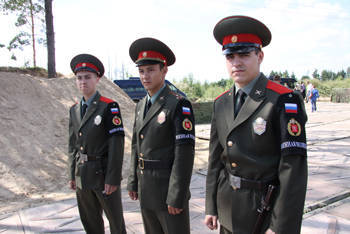 Yesterday, President Vladimir Putin introduced to the State Duma a bill regulating the activities of the military police in the army and navy. The Main Directorate of the Military Police (GUVP) was created by ex-Minister of Defense Anatoly Serdyukov in 2011. It was assumed that immediately after this, the activities of the GUVP and its regional structures would be legalized by the State Duma. But corruption scandals and the removal of Serdyukov from office removed this process.


Under the new Minister of Defense Sergey Shoigu, the draft law on the military police (VP) was finalized, and in April 2013 was published on the website of the military department. But only now the adoption of the law on the EAP is coming out, apparently, on the home stretch. Sources of NG in the Duma Defense Committee are confident that the law introduced by the president will be adopted before the New Year.

The fact that the EAP is needed in post-Soviet Russia has been spoken for a long time, since the days when Pavel Grachev was the defense minister. Military police exist in more than 40 states, including some CIS countries, and they have proven their worth.

At the same time, the process of creating a military police in the Russian Federation is sometimes subjected to sharp criticism. A number of human rights defenders, including the human rights ombudsman in the Russian Federation, Vladimir Lukin, believe that the military police should not be subordinate to the Ministry of Defense, since "military officials will lead another bureaucratic apparatus." Lukin believes that the ID must be independent of the military department, and only in this case it will be effective. Military expert Vladimir Popov notes: “Military police are introduced only in the Armed Forces. But what about the other troops? How will the garrison service be organized in them? Will the VP functions, for example, be extended to internal or border troops? ” According to Popov, these procedures are not clearly defined in the draft law.

In addition, an erroneous opinion was formed in Russian society that the Interim Government would become a reliable protector of soldiers from barracks hooliganism. However, this is not the case. The President of the Academy of Military Sciences, Army General Makhmut Gareyev, has already criticized those who think that with the introduction of the military police in the army, hazing will disappear. “Children's naivety,” says the general. - Soldiers should deal with their commanders, sergeants, officers. There is no other way of educating a serviceman. ” The chief military prosecutor of the Russian Federation, Sergei Fridinsky, also believes that "the creation of a military police is not a panacea for crimes." Although he, like the government, is confident that “the transfer of the function of inquiry to the military police is the right decision, as a result, the commanders will no longer be distracted from fulfilling their duties.”

As the director of the legal department of the Ministry of Defense, Colonel Oleg Bezbabnov, said recently, “the formation of a legal settlement of the activities of the military police has been proposed in two stages.” According to him, at the first stage it is envisaged to adopt a federal law, which makes the necessary changes to the federal laws "On Defense", "On the Status of Military Personnel", the Criminal Procedure Code, the Criminal Executive Code of the Russian Federation and a number of other legislative acts of the country. And at the second stage, “it is envisaged to make changes in the general military charters”. Bezbabnov pointed out a number of problems, including questions of the curfew service. "In this regard, we need to prepare the text of the military police charter, to define its tasks and powers in detail," the officer said.

Ctrl Enter
Noticed oshЫbku Highlight text and press. Ctrl + Enter
We are
The big press conference of Vladimir Putin
57 comments
Information
Dear reader, to leave comments on the publication, you must to register.