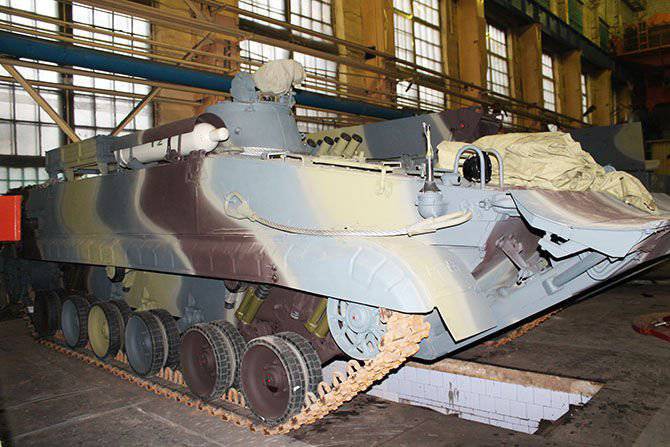 Kurganmashzavod collects not only combat platforms for infantry and assault forces, but also civilian vehicles, from floating all-terrain vehicle rescuers to nimble machines that clean our courtyards and streets. SmartNews looked at how BMPs are born, and at the same time, at the assembly of more peaceful products of the enterprise.


Four-storey house, decorated with Russian tricolor. This is the building of the management of Kurganmashzavod. Near the entrance on the pedestal - BMP-2. The entire territory of the enterprise is fenced, equipped with security systems. Passers-by from the street are not allowed here.

Before getting to the plant, SmartNews correspondent had to send his data to the plant security service, go through the checkpoint, issue a whole pack of documents. Otherwise, there is no way - a mode object. 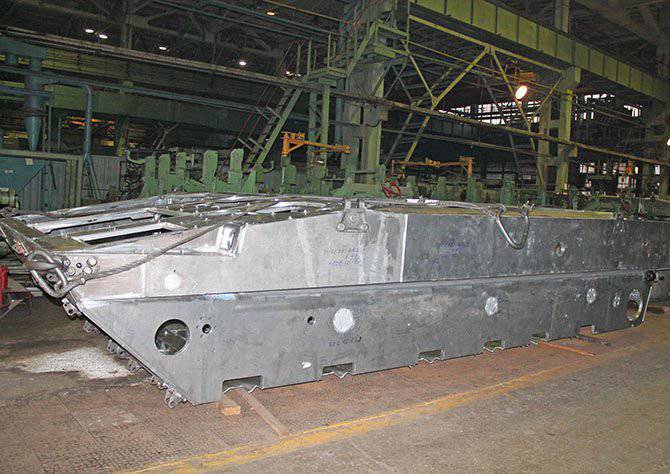 Established in 1950. In 1954, after the restructuring of production, the plant switched to the production of military products — tracked tractors, which were also used in the exploration and development of oil fields. Today KMZ produces not only military equipment, but also a wide range of civilian products. In accordance with the decisions taken by the Ministry of Defense in order to unify the BMD-4 with the BMP-3, in 2008, at Kurganmashzavod, prototypes of the modernized BMD-4 were manufactured and tested. In addition, the plant carried out work on the modernization of the multi-purpose armored personnel carrier BTR-MD. OCD is being conducted to create an average tracked platform "Kurganets-25" and vehicles based on it for the Russian ground forces. 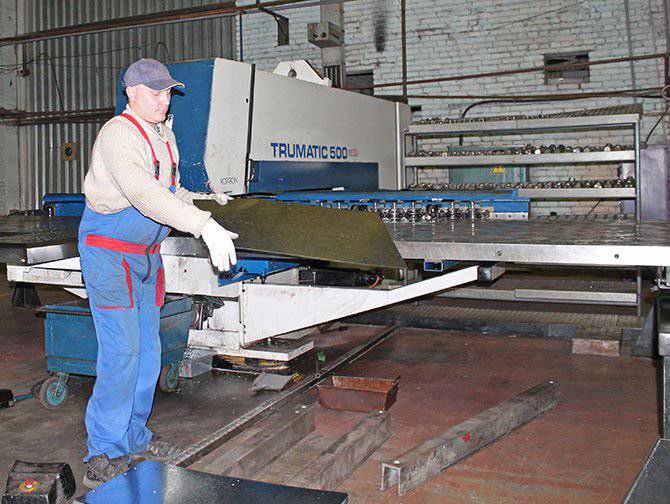 I learned all this while we were driving along the avenues and streets of the plant. It is very similar to such a separate city in the city. And the people in it resemble ants. Inspectors, welders, metal cutters - everyone is in a hurry somewhere. The traffic here is lively.

Particular attention is attracted by small cars - cars, which carry parts from one shop to another. The rumble of a blacksmith's hammer, the deafening hum of working equipment, the specialists hastily cut the iron, install supports and valves on the platforms of future machines - everything indicates that the working day is in full swing. 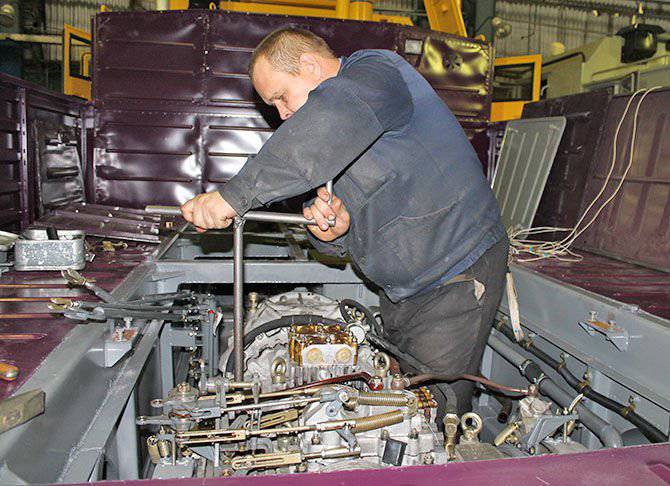 Kurgan Machine-Building Plant is one of the leaders of the military-industrial complex of Russia, the only enterprise in the country for the production of infantry fighting vehicles (BMP), as well as their military and civilian modifications. He is a member of the machine-industrial group Concern Tractor Plants. The group is one of the largest integrators of scientific, technical and production and technical resources in mechanical engineering in Russia. 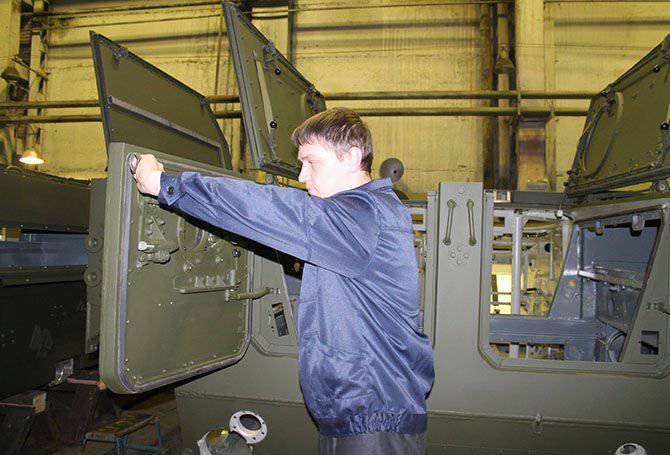 This is a Spanish-made Anayak machining center designed to process large-sized parts. Now it is processing the flask for the enterprise of the concern Promtractor Promlit. On the control panel reflects the software process - the progress of operations.

We pass further, now and the stowage stands, in which the geometry of the body of combat vehicles is formed. We saw the basis of the future BMP-4 and step by step dismantled how, what, where and in what sequence develops. The spectacle is exciting. 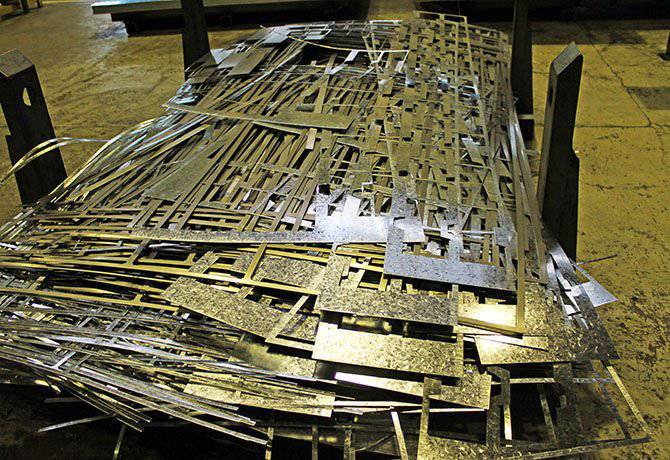 Boards, roof, bottom and a huge number of other components are needed to weld the body of combat vehicles. This is only for professionals. See how our welders work well and smoothly.

Welders really well and even with some chic welded thick sheets on the armor case. In the next room, we were shown the cramp processing line, as well as a tracked stand. By the way, not all technical operations for assembling BMPs and BMDs are allowed to be demonstrated to outsiders. But all that is possible, SmartNews showed. 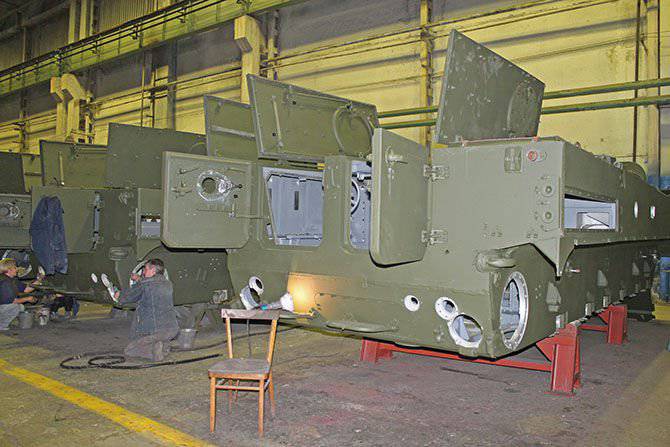 Caterpillars - mass production. And the equipment used for its production is designed just for serial production. 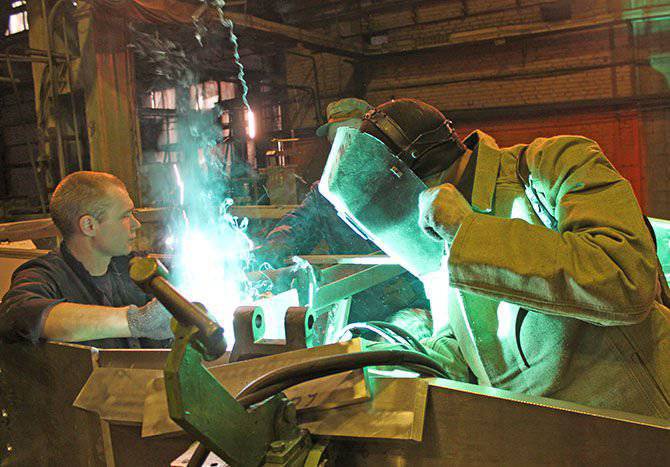 On a high stand is a caterpillar for the floating TM-140 all-terrain vehicle (the base of this vehicle is almost identical with the BMP base. - Ed.), There are several workers near it. They fasten rubber parts - expanders, as explained by the accompanying person. To the question of why this was necessary, they answered: “So that the soil does not spoil, and so that the all-terrain vehicle on the marshland does not fall.” 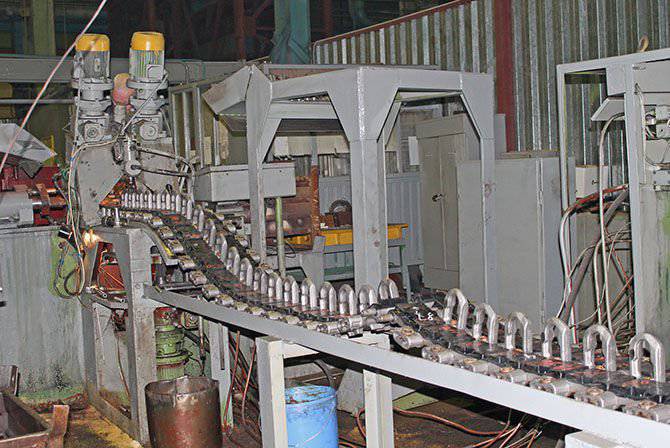 At the machine assembly plant also affects the scale: you walk along the factory spans - and it seems that they are endless. In special containers the metal shavings glitters with New Year's serpentine. But to attack this “beauty” is dangerous, otherwise you could cut shoes and injure your legs.

The only decoration of the huge plant was an information corner: “Screen of Purity”, stand “Golden Frames” with photos of honored specialists. And then he lit up a glass rack with lighting, where neatly arranged pots with potted plants. 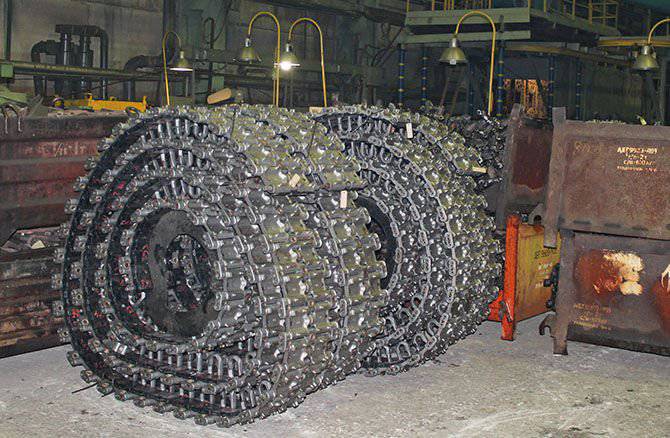 The largest unit that the SmartNews correspondent saw at the KMZ mechanical assembly plant, perhaps, resembled the size and appearance of a spaceship with a porthole.

Passing through several doors and corridors, we found ourselves in a comfortable central measuring laboratory, where the SmartNews correspondent was demonstrated in action by the capabilities of the Accur coordinate measuring machine. 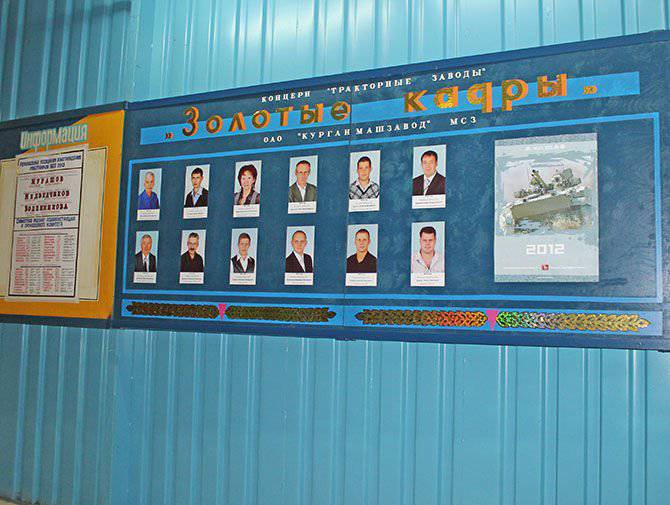 I am currently checking the spline gear gauge on the Sigma-5 three-coordinate measuring machine. 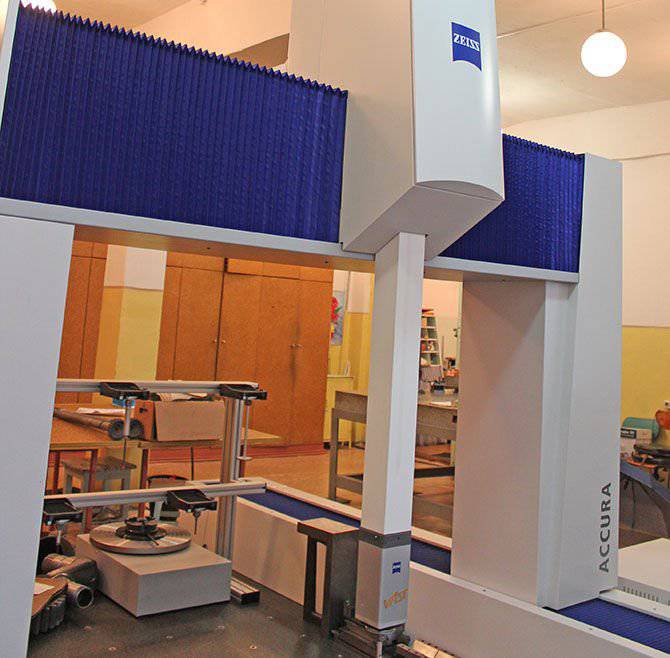 After numerous transitions in workshops and sites, we found ourselves on a recently modernized electrical section of assembly and commissioning production. Repair in pinkish-purple tones pleases the eye. The team on this site mainly consists of girls.

Seeing the guests with a camera, the girls did not for a minute look up from their machines, but at the same time they giggled and kept their posture together. 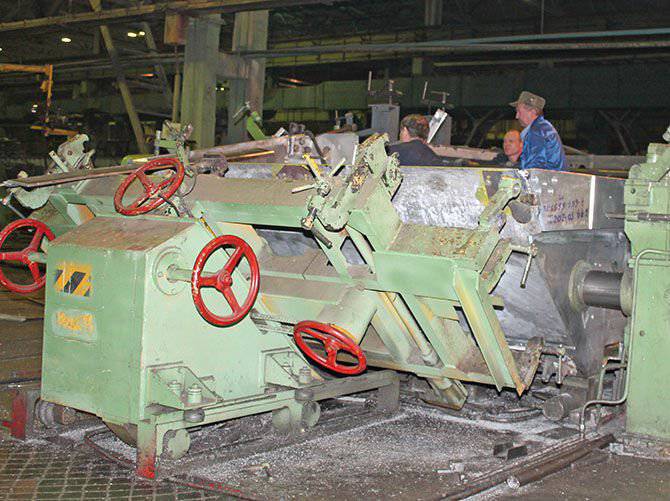 It produces the whole range of cable products for the equipment manufactured by the plant. We also make products on the orders of other enterprises of the Tractor Plants. 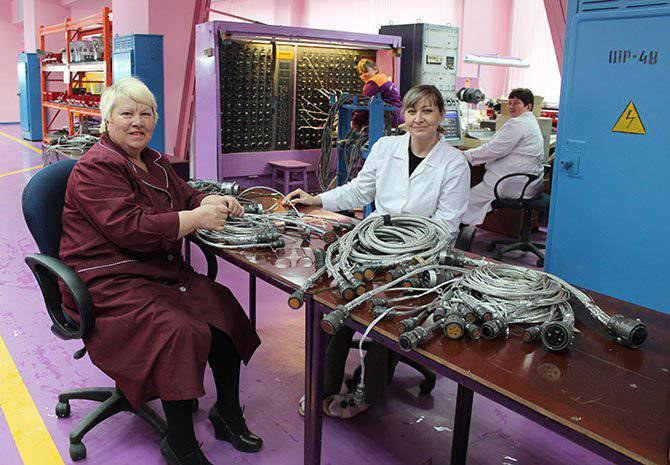 All electrical tables are equipped with lamps, loupes and various necessary tools. We also looked at the control point, where cable products are tested for connection and breakdown anomalies. 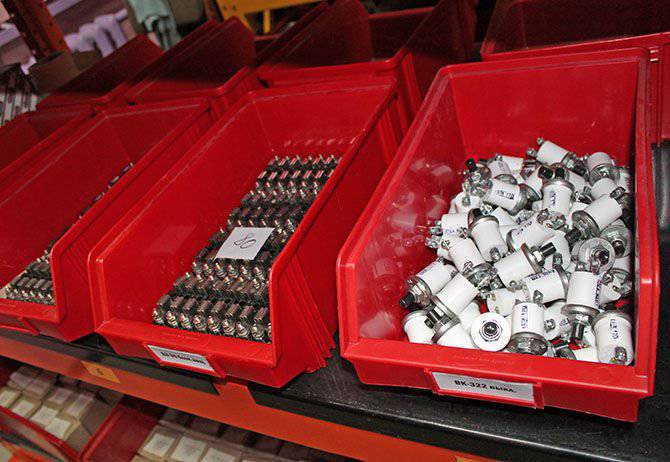 We have manufactured cable knots, they are rolled up into a bundle, laid out, pulled out. The harness is ready for shipping and installation on the product. 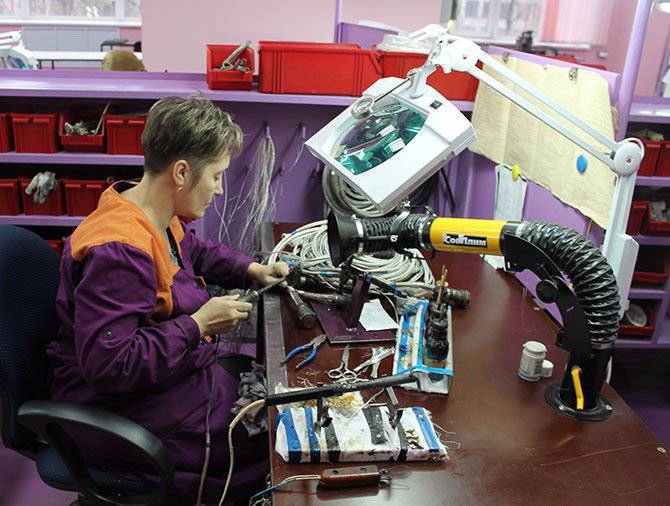 Behind two hours that flew just indescribably quickly. Workers began to gather for lunch, where they invited the SmartNews correspondent. But in terms of our tour, several more objects were indicated, which we simply could not not visit. 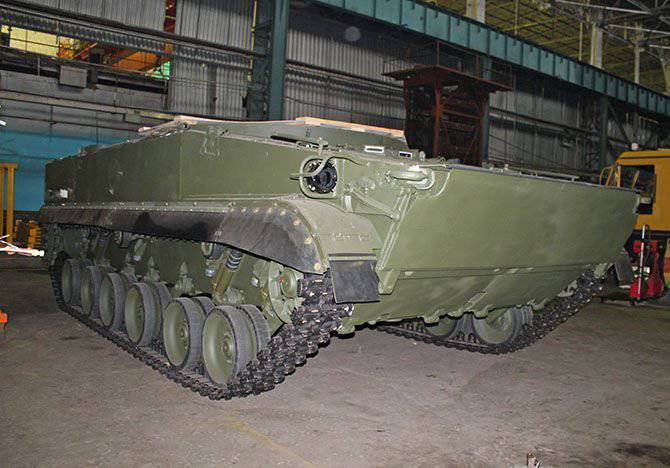 As soon as we passed through the assembly-and-delivery production checkpoint, we saw the real Tanks and, strangely enough, nearby - MKSM-800 municipal construction machines. It is interesting to observe these small (in comparison with a tank or BMP) yellow mobile cars when they clear the snow on the city streets. The entire assembly process of the ISSM at the plant was shown in stages. 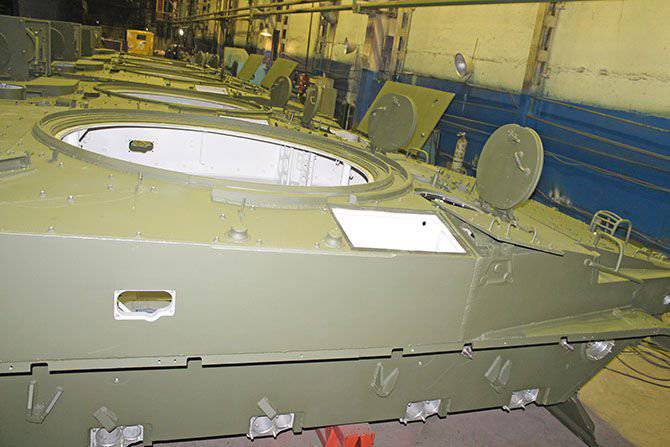 On the body are mounted onboard gearboxes, hydraulic motor. Then the fuel tank, electrical equipment. After tying the engine on the machine is installed cabin, mounted wheels. A number of factory tests - the final stage before delivery of the product for shipment. A car drives in for inspection, for washing, it is painted, stencils are glued to it, and it comes to final change. 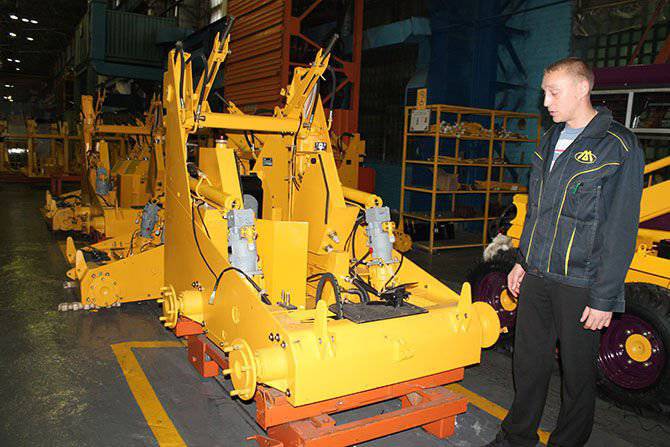 Other machines that are called armored repair and evacuation vehicles by the factory nomenclature go for hydro tests, that is, to be tested on water. This is a BREM, they are designed to evacuate stuck and damaged tanks and other heavy equipment, including from the enemy’s fire. They provide the necessary repairs and maintenance in the field, for which winches, welding equipment, lifting devices are installed on the BREM.

Our excursion at the site of flexible technologies has come to the end. The laser equipment of the company TruLaser allows you to quickly and efficiently cut the metal, to procure the necessary parts at once in large quantities. Workers cut thick sheets with the clarity and skill of a seasoned seamstress wielding scissors. Only faster. To capture this process in the photo was very difficult, but still managed. 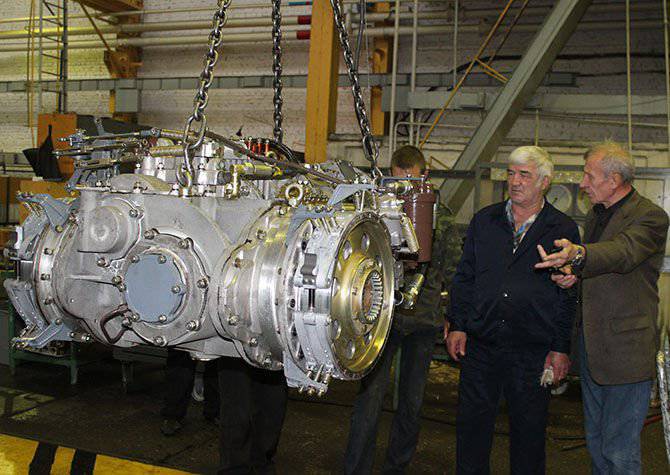 The laser beam cuts metal much faster than the camera button works. We can give details of any shape. 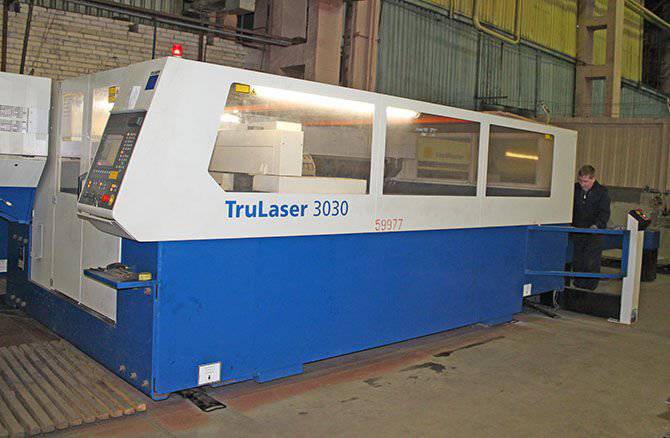 Outside it is damp and cool, it is raining, before the stop the path was not close. But I somehow don’t think about it, because today I saw with my own eyes how combat vehicles are created. 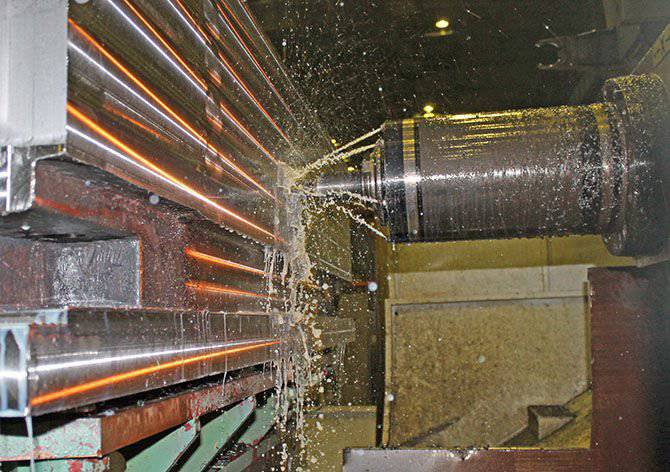 Ctrl Enter
Noticed oshЫbku Highlight text and press. Ctrl + Enter
We are
How helicopters are born: the new Mi-8AMTSH-VA for the ArcticLanding airborne assault on the coast, occupied by the enemy
10 comments
Information
Dear reader, to leave comments on the publication, you must to register.