Who leads the “Name of Victory” contest and who leaves it?

December 3 2013
177
On December 1, 2013, the first round of the Victory Name contest ended, in which Internet users had the opportunity to vote for one military leader or another (a politician who had direct or indirect relation to military affairs). After the first round, 15 "outsiders" of the competition held by the All-Russian State Television and Radio Broadcasting Company (VGTRK) together with the Russian militaryhistorical society under the auspices of the Ministry of Culture of the Russian Federation.


If any of the readers did not have time to vote, then, as they say, there is no reason for sadness, since there are six rounds in the contest and the final is scheduled as the final stage, the results of which will be announced on 9 in May 2014. At any of these stages, voting is conducted through competition site.

This time, the organizers, apparently intending to take into account the obvious blunders of previous similar contests, decided not to use this possibility of voting as an SMS. In addition, it was announced that if an attempt is made to “wind up” votes for a certain candidate through various Internet technologies, the organizers of the competition reserve the right to annul these votes.

According to the results of the first round of the contest “Name of Victory”, three leaders were determined. The result is, to be honest, predictable: the majority of the voters “assigned” the title “Victory Name” to the commander Alexander Suvorov. The choice is more than worthy, although, by and large, choosing the best of a wide range of glorious names is not a simple matter. In the second position after the first round of the competition - Mikhail Kutuzov, and, if I may say so, locked the top three Alexander Nevsky. 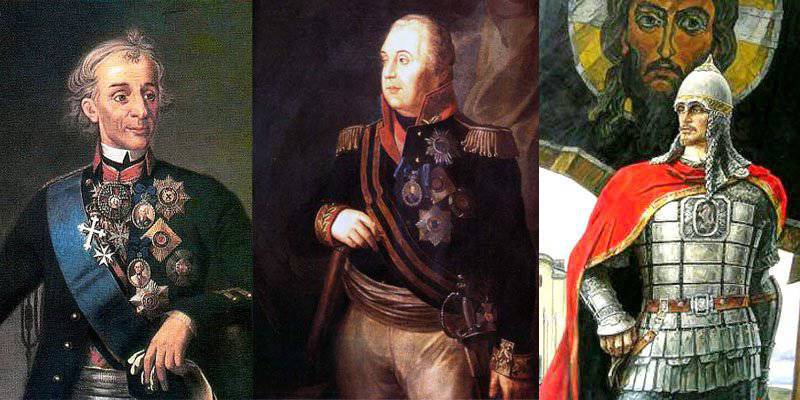 Last place in the second round of 85 “lucky ones” was taken by Count Alexei Arakcheev (83 place), first Russian Field Marshal Boris Sheremetev (84 place) and, as the site’s organizers say, “possibly the best Russian military leader of the Peter era” Mikhail Golitsyn.
Such people as Mikhail Loris-Melikov (cavalier of the Order of St. Ap. Andrew the First-Called, Commander of the Terek Cossack Army, participant of the Caucasian and Crimean War, and Russian-Turkish War of 1877-1878), Sergey Kamenev (Commander-in-Chief of the Armed Forces of the Republic, one of the founders of the Red Army), Baron Ferdinand Wintzingerode (Cavalry General, participant in the battles of Austerlitz, under Leipzig (“Battle of the Nations”) and a number of others, in the battle of Lutzen (Lutzen) commanded the Allied cavalry).

In addition to the mentioned personalities, the “losers” of the first round of the contest “Name of Victory” were:

Ivan Paskevich (military leader of the epoch of Nicholas I),

Vladimir Selivachev (military leader, distinguished himself during the Russian-Japanese and the First World Wars);

Peter Wittgenstein (commander of the era of the Patriotic War, Field Marshal General (1826));

Ivan Dibich (military leader under Alexander I and Nikolaev I, full cavalier of St. George);

Fedor Apraksin (a man who is one of the creators of Russian fleet);

Jacob Bruce (one of the reformers of the Russian artillery of the Petrine era);

Alexey Basmanov (one of the boyars who led the oprichnina under Ivan IV);

Marshal Pavel Batitsky (one of those Soviet commanders who stood at the origins of the air defense forces);

Nikita Repnin (the hero of the Battle of Poltava; the man in charge of the capture of Riga during the Northern War);

Rodion Bour (one of the military leaders who particularly distinguished themselves in the Battle of Poltava).

The least number of votes on the results of the first round of the competition in question was scored by Alexander Buturlin (cavalier of the Order of St. Ap. Andrew the First-Called, Field Marshal General).

Starting from the second stage, the votes won by the “candidates” in the first round were canceled by the contest organizers, which again leveled the chances. However, while the top three remains unchanged. Although the number of "winners" of the competition can get such military leaders, who are separated from third place by all 0,1% and 0,6% of votes, respectively. This is George Zhukov and Fedor Ushakov. At the moment, about 750 thousands of Internet users have voted.

One of the objectives of the competition is to acquaint citizens with personalities who at different times made a significant contribution to the cause of victory (at a certain historical stage). This goal is being achieved in stages: after the first round was summarized, 15 articles appeared on the site of the Russian Military Historical Society devoted to military leaders who had not made their way into the next stage of the competition. Following the results of the competition, several documentary films will be shot in which the authors will in detail tell about the military achievements of the generals who took the leading positions.

It should be noted that the contest “Name of Victory” is much calmer (as they say, pah-pah, so as not to jinx it) than the previous contests organized by the All-Russian State Television and Radio Broadcasting Company. Of course, this competition also has its own, let’s say, features: well, for example, in the presence of Ivan IV the Terrible, the absence of Peter the Great, as well as the absence of “politically incorrect” among the “competitors”, as the organizers of the competition apparently figured Joseph Stalin (this is in the presence of such "politically correct" as Nestor Makhno or Leon Trotsky). But to argue with the organizers is a thankless task, and therefore there is nothing else left to do either to participate in the competition of the kind that is described, or to ignore it for some reason. In the end, any of our readers can take the initiative to conduct their own competition. Well, for example, a contest in the name of the worst military leader in Russian history. So what? - not everyone was able to solve the assigned tasks with brilliance on the battlefield or at headquarters ...

Ctrl Enter
Noticed oshЫbku Highlight text and press. Ctrl + Enter
We are
Results of the week. "Who you are lucky, in fact, and will carry a cock, and such a bird as you, I, too, will rush!"The first results of the exhibition IDEX-2013
177 comments
Information
Dear reader, to leave comments on the publication, you must to register.