December 2 2013
505
So, it was not possible to seduce Ukraine at the Vilnius summit with a “euro-association”. Grooms were extremely greedy, arrogant and deceitful. Starting with the fact that under the persuasion of "European integration", as it were a legal marriage, a "historical choice," in fact, they only slipped the association, that is, the bed without any obligations. In this bed Ukraine was offered to completely “surrender” - to open its market, due to which the European commissioners-grooms expected to fuck their “democratic interests”. And then - the role of servants and unskilled laborers in the backyard. Being in the role of the head of this servant Yanukovych associates did not smile. 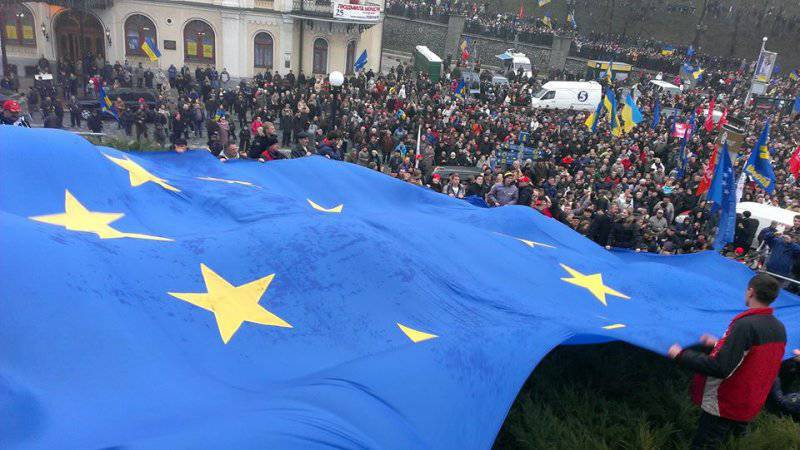 How would this European robbery turn into a further “democratic development” and well-being of Ukraine? - a terrible secret, for a terrible lie. Just look at the examples of Bulgaria, Serbia, Romania and other Young Europeans, including the Baltic states. All of them have already lost not only any industry, but also, as a result, youth, that is, the future: in the Baltics, up to 30% of the working-age population works abroad. These are all European national disasters, which are covered by the treachery of national elites that have moved to Brussels. All these “European values” must somehow be fed, that is, the European Union needs further economic robbery of new countries to maintain their falling pants.

The secret democratic dream of the European Commissioners was, through all appearances, gaining access to the Russian market through Ukraine. When Russia firmly promised to close the FTA with Ukraine, it caused their public hysteria and accusations of Russia of “pressure on Ukraine”. And what is the pressure? Again a lie. But the European Union could open its market for Ukrainian goods - and that’s just the end of it. But it’s all a matter of capturing foreign markets under demagogic discourse on “European values”.

However, the situation for President Yanukovych is stalemate. First, he betrayed Russia with his European integration course, and “threw” the European Union and his “Westerners” in his pro-Russian voters in the East and South of Ukraine. Calling, at the last moment, the Euro-association “noose around the neck,” said it was necessary “to remove from the corkscrew” economic relations with Russia, and immediately declared a commitment to European integration, albeit on an equal basis. And this immediately put her in doubt, because of what equality with the European Union, “with a noose around your neck,” can you talk about?

As an official power, Yanukovych is de facto at the center of the political scene in Ukraine. But in view of his throwings, the policy of “sitting on two chairs”, this political center fails under the pressure of external and internal political poles. With such a policy of Kiev, any serious money, and help, Russia will not give, the European Union will not give anything at all, because it has no money at all.

What does his heart calm down? The European Union will start avenging the “Yanukovych regime”, in fact, has already begun to avenge, sending its zapadenskuyu “fifth column” to euromaidans. Yanukovych will apparently continue to pursue a situational "multi-vector" policy, and will fall deeper and deeper, and will repeat, in the end, the fate of President Kuchma. When the authority of the central authority in Ukraine falls to the level of the plinth, the States, the ideological inspirer of the Eastern Partnership policy, are unlikely to escape the temptation to repeat the “controlled chaos” in Ukraine - the new Orange Revolution. The hands of the European Union. If “peacefully” it is impossible to lay Ukraine in American hands, it means that you will get Orange chaos.

But the repetition of "Kuchma" in detail is unlikely to happen. It is unlikely that Putin this time will calmly look at the European robbery of the machine-building complex of Ukraine, focused on Russia, and even near its borders. He will be forced to support the pro-Russian forces in Ukraine, for example, the Ukrainian Choice, and then the political half-life of Ukraine will begin.

In general, nothing else for Russia, in the person of Putin, remains. The main European and democratic value of "Europe", along with the usual egoism and new-fashioned homosexuality, continues to be the image of Russia as an "evil empire", which again began to be lovingly recreated at the Euro summit in Vilnius. This is the cornerstone value on which the whole of European democracy-demagoguery, under the control of bureaucrats from Brussels.

And Russia will always be guilty before “Europe”, will be an “evil empire”, because “Europe” always wants to eat. And pay for it with tales of human rights, the rule of law, and the rule of law. While the essence of European democracy is simple: demagoguery and shameless manipulation of public opinion, an almost literal repetition of the Roman "democracy" with its "bread and circuses for the plebs." There is nothing new under the sun. But there is no place to take bread any more, Ukraine is its last “bread and show”.

The impudence of today's democratic lies, especially after the “Snowden case” and “Assange”, the secret prisons of the CIA, the financial scams of the largest Western banks and the humanitarian bombings of many countries that have redeemed international law and the right to life of millions of people, are striking. However, for a long time you can only deceive those who are happy to be deceived ...