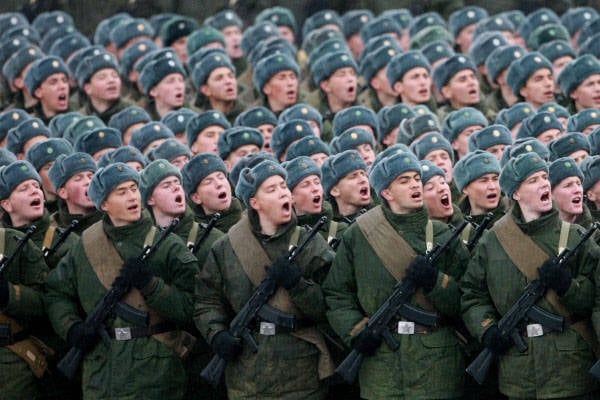 The army is undergoing a broad offensive on the contract front. In order to attract new professionals to the soldiers' system, the generals involved not only the propaganda apparatus, but also considerable financial resources.


RG has already said that the Ministry of Defense is ready to pay 25 million rubles for the creation of a pair of commercials about Russian Rambo. They are planned to be shown on television and in cinemas, as well as posted on the Internet. But perhaps the best thing about the professional service is agitating specific steps that the military command has already taken and is still going to take to improve the quality of life of its contract soldiers.

Recall that in August, by order of the Minister of Defense for them, they introduced the so-called surcharge for Fizo. Formerly, a pro soldier was required to serve at least two years to receive it. Now the time limit is removed. At the stage of adoption, another preference for contract servicemen is the monthly payment for skydiving. And the issue with the same surcharge for the special conditions of service of privates and sergeants-pros has already been resolved. In October, about 25 thousands of midshipmen ensigns and contract service soldiers received it. The money is pretty decent - from a quarter to half of their official salary.

As the RG correspondent was told by the Ministry of Defense, before the Donets this year, more than 4 thousands of contract servicemen who had been abandoned by the service in the North Caucasus would receive a substantial increase in salary: depending on the army position, from 10 to 18 thousand rubles. In parallel, the generals are working on the issue of introducing an additional payment to soldiers-pros for furnishing essential equipment. If such a rule appears in the law, each contractor will receive at least 10 monthly salary wages. According to the calculations of the Ministry of Defense, before being dismissed from the army by age, a person under this expenditure item can receive up to half a million rubles in total.

For the soldiers of the "mountain" units also want to introduce a special allowance - from 30 to 50 percent of the salary of the contract. A mountain training instructors can increase their tariff level by one and a half times and each month pay an additional 70 percent of their salary for a military post.

Among other measures of social support for this category of soldiers and sergeants, the plans include giving the family members of servicemen the right to use army first-aid posts, polyclinics and hospitals free of charge, and also to go on vacation free of charge once a year regardless of the region in which the person serves. Finally, regulatory documents are now being prepared that will allow the pro soldier to be dressed in a uniform that is almost the same as the officers wear. But the most important thing is that special insignia will appear on it, which will allow contract servicemen to even differ in appearance from recruits.

The Defense Ministry is trying, as far as possible, to solve the housing problems of professional soldiers. Right now, the generals are revising plans for the improvement of military camps and are improving the system of army mortgage. In many military units, former barracks are being converted to accommodate single contract soldiers. From the office’s unused housing stock, pros have been assigned 12 thousands of 620 apartments and 38 thousands of 110 rooms in the dormitories.

Recall that by the decision of the President of the country to 2017, the army must serve at least 425 thousand contract soldiers. This is not an easy task, but, according to the Defense Ministry, is doable. In any case, the results of recruiting professional soldiers this year inspire generals to optimism. In eleven months, 130 passed thousands of people through recruiting points, but after careful selection of candidates, the contract was concluded only with 70 thousands. And this is at the established rate of recruitment - half a thousand people a year. The statistics speak for themselves. Now the average salary of contract soldiers in the army is 23-35 thousand rubles per month. The ministry claims that individual pros have a hundred or even more than a thousand.

Ctrl Enter
Noticed oshЫbku Highlight text and press. Ctrl + Enter
We are
The result of reforming the monetary allowance of military personnel in 2012 year
82 comments
Information
Dear reader, to leave comments on the publication, you must to register.