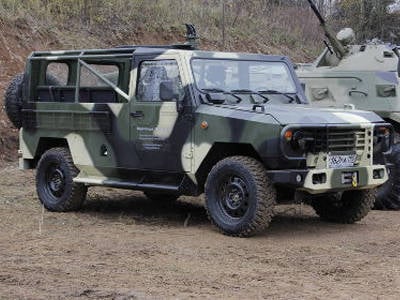 The Russian Ministry of Defense completed state tests of special army vehicles of the Scorpion family. On this, according to Interfax, said Alexander Shor, CEO of the corporation "Protection", producing machines. According to him, the military department recommended the Scorpions for adoption. Machines can be adopted after the passage of the interdepartmental commission.

At the end of September 2013, it was reported that the Russian Ministry of Defense intends to acquire in 2014 a pilot batch of transport vehicles Scorpion-2М. According to Shor, the order for experienced cars will be several dozen for each of the series that have passed state tests. Preliminary operation of the purchased cars will be carried out within the next year.

Scorpion vehicles are designed for the transportation of military personnel and goods on various types of roads and off-road. Up to eight people can fit inside the car. The vehicles can be equipped with a combat module produced by the Kovrov plant named after Degtyarev. The Scorpion is equipped with a horsepower 116 diesel engine and is capable of speeds up to 130 kilometers per hour.

Ctrl Enter
Noticed oshЫbku Highlight text and press. Ctrl + Enter
We are
In the Ground Forces of the Russian Federation will arrive armored vehicles "Scorpion LSHA-2B"Trials Scorpion-LSHA B
14 comments
Information
Dear reader, to leave comments on the publication, you must to register.