November 29 2013
48
Euromaidan died, but no one noticed. A small party appeared in the center of Kiev, which in the evenings turns into a rave-party with warming of the frozen parts of the body near the barrels with crackling firewood from the supermarket. This invention of European and American homeless people was very useful to the participants of the pro-European movement. The Facebook generation is hanging out on a narrow patch between a giant Christmas tree being built and some kind of stall houses. Muffled up in the flags of Ukraine, periodically run in the subway to bask. There is much more activity on the Net than on Independence. Yes, even on the day of the Vilnius summit. 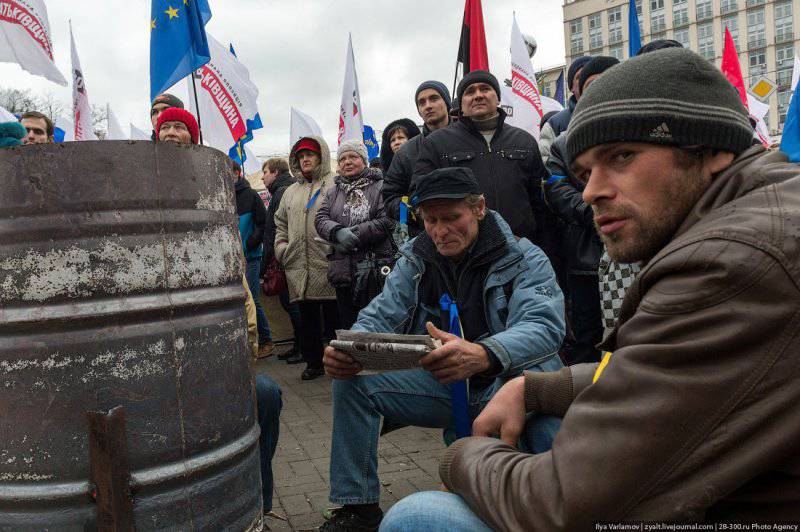 Thanks to the Tajik from the UE, as well as to all the "protestors" who, in their cozy hostages, crap all the politicians and decided to become special. Departization of Maidan led to the appearance of a kind of real chat on the square. Ninety percent of the time goes into debating about who can perform on stage and who can't. They sent away Yuriy Lutsenko and Vitali Klitschko. The Fascists from Freedom were offended and left themselves. Now there is a lively discussion in the forums: “they pissed off the Maidan”, “they are all frozen there, they don’t know anything”, “superprints from the Kremlin work against the protesters, they came up with the idea of ​​translating the Maidan into a non-partisan format”.

Let us explain right away: no pros worked because of their complete absence. This is a myth designed to sweeten the bitter pill of defeat a bit. Euromaidan broke down for a number of absolutely objective reasons. Firstly, the three opposition clowns so convincingly portrayed a parody of an alternative to the authorities, which caused a natural feeling of complete rejection of the mainstream protesting mass. Their retarded faces and the same speeches, an overt desire to use social energy to promote their own election campaign have repelled any desire to stand in the cold for them.

Secondly, the strongest post-injury trauma. This refers to the 2004 events of the year with the harmonious transformation of maydanschikov into used condoms named after Viktor Yushchenko. The natural fear that ordinary crooks and adventurers, as always, take advantage of the “Euro-revolution” fruits, led to the collapse of the party Maidan in the European Square and the extinction of the “united” Euromaidan in the center of Kiev.

Third, Yulia Vladimirovna played a role, calling for a new generation to make way. It is quite clear that the victim of the totalitarian junta could not allow such a vigorous process to take place without her. The same is necessary: ​​three idiots with might and main unwind on the European Square, and it means that it lies in the chamber itself and no one even pays attention to it!

Fourth, it was not without the coordinator of the distribution of American grants Oleg Rybachuk. For the third year in a row, he has been fruitfully developing up to ten million dollars annually to unwind the “network political marketing” scheme. The idea is as follows: traditional party structures have exhausted themselves. They all focus on the leader, are hierarchical, perform only two tasks: they lead incomprehensible people to the parliament and act as a support group for the presidential elections. Then the deputies outbid, presidential candidates enter into separate agreements, in general, behave like ordinary political shit. Therefore, it is necessary to develop a civil society that will generate new leaders of public, more precisely, network opinion. Then the totalitarian junta will face universal resistance and it will no longer be possible to squeeze Oleg Borisovich in a dark corner and break it over a bald, brightly shiny skull. For the role of network opinion leaders, Borisovich charged slaves from the Pritula stable, who, strictly speaking, brought this plan to life at the stage of euromaidan.

The traditional scheme of the "orange uprising" lasted no more than five days. The key points of this technology are the establishment of tents and the constant expectation of dispersal of Maidan by security forces. All the PR support of the party headquarters was directed precisely to this. They will find provocateurs, they will tear the SBU’s car, then they will start throwing smoke bombs. And party leaders at this time are in the midst of the people, beautiful photos and beautiful sketches are made on the theme “Arseny, like a lion, fighting“ Berkut ”. Someone is detained, someone breaks hands and a finger, someone runs with a broken head. All the new masses of people excited by such injustice, pull up in the center of the square. Galicia supplies cheap and ideologically correct Raguli, willing to spend the whole winter in the center of Kiev for a small fee. In the doorways are hundreds of buses with Russian special forces. Everyone is excited. Here ran Snitsarchuk with a concubine. She is looking for a place of concentration of "titushki" to engage with them in a decisive and uncompromising battle to the last gum of underwear. And Sodel’s cohabitant carefully documents and removes all this. Familiar picture? This is how events developed. But then something went wrong. Rybachuk’s plan worked, and a whole series of speakers began to push through the idea of ​​de-party, a new force, pure politics. Vladimir Ilyich called such thoughts "intellectual shit", "opportunism" and for some reason "Young Hegelianism." And he proved that with a small handful of sailors you can make a very big show.

Opposition leaders did not expect that bydlomass, which until recently had meekly followed their activists, periodically expressing enthusiasm for powerful opposition leaders, would send them away. At the same time, the authorities did not even do anything to develop the idea of ​​departization. With me, one consultant was looking for a figure who would voice the idea of ​​holding a Maidan without flags. But then it turned out that the process was in full swing. Inflexible Colonel Anatoly Gritsenko ominously drove all the oppo-trash from the Maidan. Then he came to the square and was horrified: the fighters are unshaven, the perimeter is not guarded, there is no guard on the nightstand, no one agrees with the cops. He quickly organized everything, he was sent, and that was it.

Let me remind you that on November 27, in accordance with the “resolution of the insurgent people”, an extraordinary session of the Rada was to take place, during which, under the enthusiastic roar of the crowd, the deputies were obliged to vote either impeachment or European package. Not one bitch yesterday even talked about it. There was only a touching presentation in front of the AP: a thousand of students taxied with a cloth on which there were signatures for European integration. Everything was painted with flowers and some badges. The column chastely stopped in front of the police cordon and conveyed this message to Fedorovich. They would give teddy bears.

"Euro-revolution" has been reduced to a conflict between students and the leadership of universities about whether to go or not to go to the uprising. Closer to the session, anxious parents will arrive and set brains on their revolutionary children who are too expensive for them.

Ctrl Enter
Noticed oshЫbku Highlight text and press. Ctrl + Enter
We are
Chronology zhlobstva: from queues and truckers to restless stallsFinancial and political secrets of Oleg Pyagnibok and Vitaly Klitschko
48 comments
Information
Dear reader, to leave comments on the publication, you must to register.