"The EU is on the verge of the biggest failure" 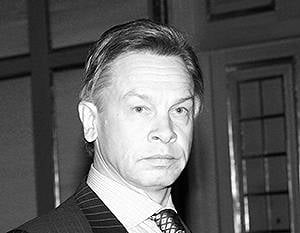 “The European Union has missed it - Ukraine literally floats away from the hands, like fish from a net, into which it was almost caught,” State Duma deputy Alexei Pushkov told the VZGLYAD newspaper. He does not exclude that the West will be forced to change its position and still agree to trilateral talks with the participation of Moscow and Kiev around the association agreement between Ukraine and the EU.


The West on Wednesday openly declared the fallacy of its policy towards Ukraine. Thus, Polish President Bronislaw Komorowski admitted that Brussels made a mistake in assessing problems in relations between the EU and Ukraine, but said that this “problem is the policy of onslaught and blackmail that its eastern neighbor applied to Ukraine”.

Komorowski is confident: "At present, the firm position of President Putin increases the chances of formulating the monolithic position of the EU countries and solidarity actions in favor of Ukraine."

At the same time, the predecessor of Komorowski, the ex-president of Poland, and now the EU representative at the talks with Ukraine, Aleksander Kwasniewski, once again called for the material interest of Kiev. “Our proposal should be an intelligible proposal for short-term assistance for Ukraine,” said Kwasniewski. According to the negotiator, the money for Ukraine is “more than 10, maybe 20 billion euros is an acceptable amount for the EU, which gave Greece much more - hundreds of billions of euros”. Kwasniewski, quoted by the Kiev version of Versions, claims that “the European Union did not give up in the cause of Ukraine and was looking for a“ plan B ”.

Meanwhile, the positions of Kiev and Moscow on the association agreement between Ukraine and the European Union coincided: the EU-Ukraine-Russia tripartite negotiations must precede the signing of any agreements with Brussels. On Wednesday, the President of Ukraine, Viktor Yanukovych, spoke again about this variant as the optimal one. On the eve of his Russian counterpart, Vladimir Putin also called for "agree with the proposal of President Yanukovych and in a trilateral format, properly and thoroughly discuss all these topics."

Alexey Pushkov (United Russia), the head of the Duma’s international affairs committee, told Europeans why the European commissioners are still stubbornly unwilling to allow Russia to the negotiating table.

VIEW: What, from your point of view, explains the persistent refusal of Brussels to call "to discuss all three"? What is there to fear?

Alexey Pushkov: From the very beginning, the European Union considered the Eastern Partnership and the prospect of association with Ukraine as a geopolitical project. The task was not to allow Russia into this process. We are here - absolutely unwanted member. After all, in fact, the essence of this geopolitical project is to separate Ukraine from Russia, to include Ukraine in the zone of economic and political influence of the EU.

The task is not to resolve some controversial issues with Russia, but to prevent Russia from negotiating. This is the meaning of the unprecedented pressure to which the European Union is subject to Kiev.

The EU is now on the verge of the largest geopolitical failure in the last 15 – 20 years. Naturally, Brussels blames Russia above all. Therefore, for the most part, they do not want tripartite negotiations, they are making desperate efforts, trying to convince Ukraine at the last moment to reconsider and sign the agreement.

VIEW: The EU’s envoy in Moscow, former Lithuanian Foreign Minister Vygaudas Usackas, was the last to refuse the tripartite format. But maybe diplomats are not from the Baltic states, but from among the “old members” of the European Union, a more balanced position?

A. P.: Earlier, Stefan Füle, European Commissioner for Enlargement and Neighborhood Policy, and Elmar Brok, head of the European Parliament’s committee on international affairs, have already spoken with such a position. The latter, as is known, said that Ukraine refused to integrate with the EU under pressure from Russia.

There are European politicians who think broader than the figures I listed above. In particular, German Chancellor Angela Merkel suddenly announced that negotiations should be held with Vladimir Putin on this topic.

But I suspect that when representatives of the European Union talk about agreement on negotiations with Russia, they just want to achieve a change in the Russian position. Not to achieve some kind of coordination of interests, but to try at the last moment to influence Moscow - just as they are trying to influence Kiev. So far, there is no other “message” from the EU at these possible talks.

VIEW: Can the latest promises made by an observer from the monitoring mission of the European Parliament, the ex-president of Poland Alexander Kwasniewski, that the EU is already urgently preparing an economic aid package for Ukraine, can affect the position of Kiev? Previously, they have already removed their demands for the release of Yulia Tymoshenko ...

A. P.: Promises that the EU is now ready to make are unlikely to have a decisive impact. Although, of course, there is still time before the summit ...

The European Union hoped to get Ukraine’s consent to the association, solely putting forward its own demands (judicial reform, extradition of Yulia Tymoshenko) and in fact offering nothing in return. I did not want to bear any serious obligations of the financial, economic plan of the EU. And when the leaders of Ukraine decided that they would gain and that they would lose, they realized that they would lose a lot and gain very little.

In addition, Kiev was demanded to fulfill the conditions of a political nature, which, strictly speaking, have no relation to economic cooperation. Now the European Union has missed it - Ukraine literally floats away from her hands, like fish from a net, into which she was almost caught. At the last moment they are trying to save the already almost failed project.

It would be extremely strange if Yanukovych now changed his mind again and still signed the agreement. This, firstly, would mean that he is being led by the opposition, and secondly, he would completely disavow his decision taken last week. It seems to me that the leadership of Ukraine has definitely stated that today it is not ready for an agreement.

Just today, Yanukovych compared the association with the European Union with a loop - and said that he would not like Ukraine to climb into this loop. So to say, with such associations, an association agreement can hardly be signed.

VIEW: How do you assess the appearance on the US White House site of a petition demanding to declare Viktor Yanukovich and Ukrainian ministers persona non grata? What is the level of thinking of the authors of such a petition? After all, refusal to sign an agreement is not a crime ...

A. P.: The content of the petition proposed for consideration by the administration of Barack Obama is absolutely absurd. Regarding the seriousness of this appeal, I would like to note that a variety of petitions are appearing on the website of the US President, up to and including appeals to “make public the truth about John Kennedy’s murder.” As you understand, nobody is going to carry out this petition. I note that she did not even get a tenth of the necessary votes - 1 thousand signatures with the necessary 100 thousand.

The authors, as is known, demand sanctions against Yanukovych for the fact that he made a political decision to temporarily refuse association with the EU. I rule out that the Obama administration will meet this absurd demand - even the United States does not apply sanctions in response to purely political decisions.

Sanctions need to be justified either by legal, or moral and ethical aspects, or by suspicions of something criminal. In this case, I repeat, we are talking about a purely political issue, about the sovereign choice of Ukraine as an independent state, about the decision that was made by the president, lawfully elected by a majority of Ukrainians. The US administration can consider this petition as nothing more than a curiosity containing absolutely impossible requirements.

Ctrl Enter
Noticed oshЫbku Highlight text and press. Ctrl + Enter
We are
About Stalin and KhrushchevWhat you didn't want to know about England
465 comments
Information
Dear reader, to leave comments on the publication, you must to register.