Conquerors of the Three Elements 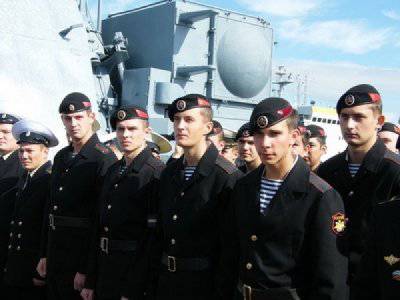 This year, the tasks of the longest long cruise were carried out by the large anti-submarine ship Severomorsk, the Red Banner Kola flotilla the diverse forces of the Northern Fleet. As part of the crew in the far sea zone, a counter-terrorism group worked under the command of Lieutenant Roman Titov of the separate Kirkenes Red Banner Marine Regiment of the SF.


Marines of the Northern Fleet take part in all long-distance campaigns and exercises. Without the Black Berets group, not a single warship or support ship will go on a long voyage or to perform combat missions. A platoon of Marine Corps Lieutenant Roman Titov, who took part in the longest campaign in the region of the Gulf of Aden and the Horn of Africa, guarded and defended the ship during crossings, in parking lots and in foreign ports during 190 days.

For the anti-terrorism team of 17 people (one officer and 16 conscripts) one of the most important tasks was to ensure the safety of navigation of civilian ships in the Gulf of Aden and the Horn of Africa. During the period when they were in a dangerous area for shipping, North Seamen escorted 16 civilian ships of various classes under the flags of Russia, Greece, Panama, Liberia, Thailand, Marshall Islands, India, Tuvalu, Egypt and St. Vincent and the Grenadines. It should be noted that the crews of many ships were citizens of Russia.

As noted by Lieutenant Titov, all the sailors showed themselves from the best side, confirming the right to be involved in the brotherhood of the “black berets” at sea.

“In the campaign, all the marines had a great experience, successfully completed a number of specific tasks, and effectively carried out anti-terrorist operations,” said Lieutenant Titov. - For myself, I concluded that when preparing for such sea voyages, more attention should be paid to fire training.

On the eve of going out to sea, the marines of a separate marine regiment of the Northern Fleet traditionally undergo a special training course, including firing training, shooting at short distances, tactical training, actions on the premises and on ships, conducting reconnaissance, studying foreign ships, working on radio stations, and also study of international anti-piracy laws.

“In our regiment, the main classes in all types of combat training take place in the field, and there are completely different conditions on the ship,” the platoon commander clarified. - Here the sailors begin to master the specifics from the very first minutes, while boarding the ship. Due to the fact that the regiment regularly conducts classes on all types of training, the necessary skills of the sailors were formed before the long march. And on the ship, the servicemen only had to adapt to the new conditions, get into the atmosphere of the ship and skillfully apply basic knowledge.

According to the platoon commander, this helped the Marines to quickly adapt on the ship, and after two weeks of sailing, they were able to act competently and confidently.

In this campaign for the marines, one of the most important combat training activities was participation in the water area of ​​the Gulf of Aden in the international naval exercises devoted to countering piracy. At the training, the North Sea sailors represented the Russian Navy and interacted with the crew of the San Marco amphibious assault ship of the Italian Navy.

“For us, of course, it was unusual to act in the heat, when the temperature kept constantly around 30 degrees,” said Lieutenant Titov. “However, this did not prevent the successful completion of all stages of the exercise, and gaining extensive experience in conducting inspection and rescue operations in the southern region.

Then the anti-piracy activity of the BOD Severomorsk and the successfully conducted operation to assist the sailor of the small-size fishing vessel Dolphin, flying the flag of Syria, received a great international response. The marines, together with the crew members, showed once again that they were ready to solve any tasks at sea, including promptly carrying out rescue operations and providing assistance to those in need.

“During the march, we repeatedly took part in the events of inter-fleet cooperation with the ships of the Baltic and Black Sea fleets,” said Roman Titov. - Everyone is very proud of the fact that BOD Severomorsk became the first ship to represent the Northern Fleet in the grouping of ships of the Russian Navy, which now operates on a permanent basis in the Mediterranean Sea.

In the platoon of Roman Titov there were only conscripts. All of them got into the marines of their own accord. The “black berets” service includes a large range of complex tasks, full of hardships and deprivations, therefore the units are staffed only by trained and physically resilient military personnel with a good educational level and high neuropsychic stability.

“As for the lengthy separation from home, then it began for the sailors immediately with conscription, so they took the long march with optimism: there is an opportunity to visit other continents, to see foreign ports,” the platoon commander notes.

Many marines, before being drafted into the army, were seriously engaged in physical exercise, and received sports classes. Among them is the sailor Rasul Shanyazov, who for many years was engaged in mountaineering and sports tourism, made parachute jumps. Prior to the conscription service, Rasul graduated from the Institute of Management and received a law degree.

“When the military registration and enlistment office learned that I had a second class in sports tourism, I was immediately offered a choice of service in the Airborne Forces or in the Marine Corps,” said sailor Rasul Shanyazov. “Then they explained to me that, unlike the Airborne Forces, which conduct an air assault assault on the ground and from the air, the marines undertake percussion operations also in naval operations.

Rasool is very pleased with how the conscription service went. Thanks to his long-distance hike, he was able to visit the foreign ports of Ceuta (Spain), the Court (Greece), La Valletta (Malta), where BPC Severomorsk made business visits.

“When we went on a hike, we were warned that, owing to its duration, our call-up service might exceed a year,” Rasul said. - In general, it happened for nine sailors. For example, I re-served for a month and a half, but this did not upset - we performed the state task. But now we will return home to these marines - the conquerors of the three elements.

Ctrl Enter
Noticed oshЫbku Highlight text and press. Ctrl + Enter
We are
Conquerors of the "Kingdom of Ice". Russia celebrates the day of the polar explorer27 November - Marine Day
5 comments
Information
Dear reader, to leave comments on the publication, you must to register.