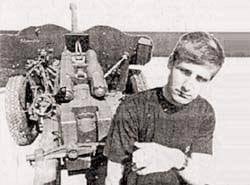 We live with Alexander Zavyalov on the same street, but met only in Chechnya. The artillery division, where Sasha served, at that time defended the station Chervlennaya as part of the 81-th motorized rifle regiment. And just recently, the 81 th regiment, where, apart from Zavyalov, served many more of our fellow countrymen, was removed from the combat area, and most of the soldiers were demobilized - they went home. One of them - Alexander Zavyalov.


In Chechnya, the commanders of self-propelled howitzers were instructed to keep a “notepad of the firing of the gun” - a red book where all the data on each shot were accurately entered. I ask Alexander: "Do you remember your first shot of this war?"

- Sure. This happened on December 31 immediately after lunch. The division at that time stood behind the Northern airfield, not far from the village of Rodina, at the foot of the pass. The regiment entered the city of Grozny, and we had to support it with fire. They fired for more than a day, only taking a break before new targets appeared. In total, during this time my gun fired 200 shots. Put barrage, hit on tanks militants, fired at the presidential palace, covered infantry.

In the first days of January, we were transferred directly to the North Airport, where we stayed for a month and a half. The mechanism of howitzer artillery, in principle, is simple. Artillery spotter leaves the command and staff vehicle to the front. From there he sends the coordinates of the target to the headquarters of the division. At headquarters, everything is calculated, and each target is distributed across the battery. In the artillery battery, everything is recalculated again, and the coordinates are already on specific instruments. Here comes the turn of the commanders of self-propelled guns, we do everything else ourselves — we count and direct the guns. It should be a team - we shoot. They are now counting on artillery, of course, out of their minds, there are special counting devices — mechanical and electronic.

We shot at the target, at its initial coordinates. If the goal is moving, then give permanent amendments: "To the right", "Left", "Higher", "Below". Until it hits.

For all the time spent in the war self-propelled guns almost never left their cars. We can say that the self-propelled gun has become their home. We slept here, in cars, in sleeping bags, side by side - automata and body armor. In this case, the radio must be on duty someone from the crew. At any moment, the coordinates of a new goal could come, and then again: “Calculation, to battle”! ”. 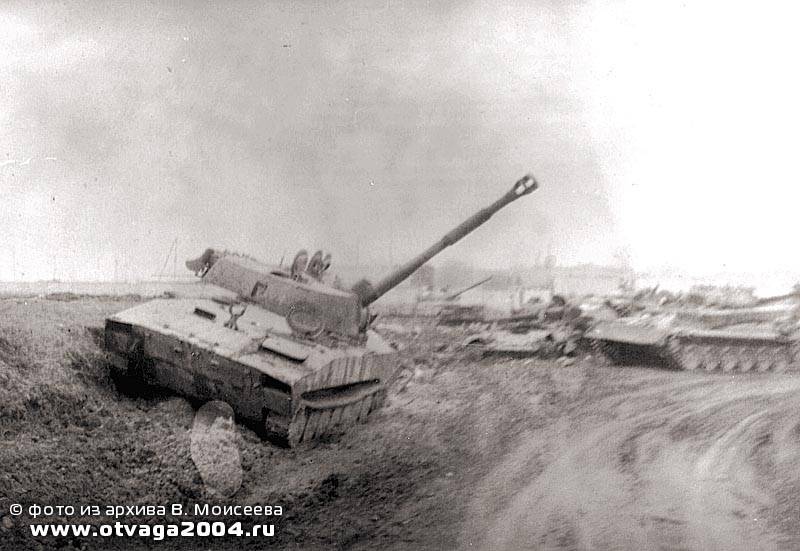 The self-propelled gunners with their fire so “got” the militants that, as the division officers told a reporter of our newspaper, from time to time the Chechens tuned in to their radio waves and promised to deal with the artillerymen. Alexander recalls: “They tried to fulfill their promises on the old New Year. 13 January hit the Chechen "Grad" on the positions of their division. Only four volleys on 40 shells plus single. Fortunately, the qualification of the Dudayev gunner was weak, and all the rockets exploded with undershoot. Otherwise it is difficult to imagine what would have happened if at least one missile hit the target. ”

On this day, a self-propelled gun standing next to Alexander’s car caught fire. As Zavyalov says, “we didn’t even understand what had happened: we got into it from a hand-held grenade launcher or from something else, but the ammunition assembly in forty shells detonated, and almost nothing remained of the self-propelled gun. Fortunately the crew left the car on time and was not injured.

Corr. "C" could not resist and asked about the notorious needle shells, about which much has been written and said (the so-called shells with arrow-shaped ready striking elements). When were they used?

- The position of the division was lined with signal mines. One of the guns in turn was in constant duty, providing military escort. And here, when the alarm mine worked, they beat on this place with shells filled with these “needles”.

In the twenties of February, the 81-th regiment was transferred to guard the station Chervlennaya. And here the gunners had to work, of course, not as intensively as at Grozny, but still. They beat the pass, covering the strategic bridge over the Terek. In just a couple of weeks, Sasha fired nearly three hundred shells in the Chervlennaya self-propelled gun area.

In the last weeks of Alexander's presence in Chechnya, their three weapons remaining in the battery were handed over to the Leningrad special forces and transferred to the bridge mentioned above. At night, the special forces went to the raid on the outskirts or on the pass, while the gunners supported them with fire. On one of these nights, the special forces ran into mines and suffered casualties. The battery was reassigned to the head of the bridge.

The last shot on this war was his weapon made 4 April. Total Sasha self-propelled gun made about one thousand shots. Then they were sent to a permanent place of deployment.

In conclusion, one more detail: before the Chechen war, Sasha never (!) Had to shoot his weapon. In the summer of 1994, they traveled to the training ground, where there were only theoretical classes. They made the first training shot at the frontline training ground in Mozdok.

Ctrl Enter
Noticed oshЫbku Highlight text and press. Ctrl + Enter
We are
Mamaev Kurgan and "Motherland is calling!"Captain Korolev's last fight
8 comments
Information
Dear reader, to leave comments on the publication, you must to register.