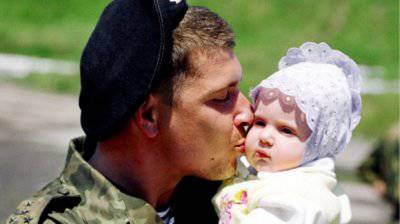 
The draft law, developed by the Russian Ministry of Defense, proposes to grant contract servicemen who bring up children up to three years old alone to take care of a child. And before the child reaches the age of one and a half, a monthly cash benefit will be paid.

In our army there are a little more than 40 thousands of female contractors. How many are single fathers - while no one counted. If the bill is approved, our military will approach Western standards in terms of their social protection.

So, it is necessary to develop a law that would meet all standards.

It is a complex legal conflict that can be explained by the fact that the Ministry of Defense developed a bill that gives male military personnel the right to take leave to care for a child. Experts believe that the collision was caused by the conflict that arose in connection with the case of Konstantin Markin.

Well, Markin himself over the years, while the courts went, the son grew up. His command also gave a leave to the military father at that time, although there were no special laws at that time.

Ctrl Enter
Noticed oshЫbku Highlight text and press. Ctrl + Enter
We are
The result of reforming the monetary allowance of military personnel in 2012 year
23 comments
Information
Dear reader, to leave comments on the publication, you must to register.