What Western democrats will never talk about

November 26 2013
59
Is the planet starving? Not all. In the west, food is thrown away, in other parts of the world children die from exhaustion. Now more than seven billion people live in the world. Constantly there is talk about overpopulation, about overspending of resources, that the earth will not feed so much that soon there will be no food at all. So is there really a problem of overpopulation, or is it a specially inflated information bubble for some purpose?


About this in an interview with the newspaper "Adygea today." 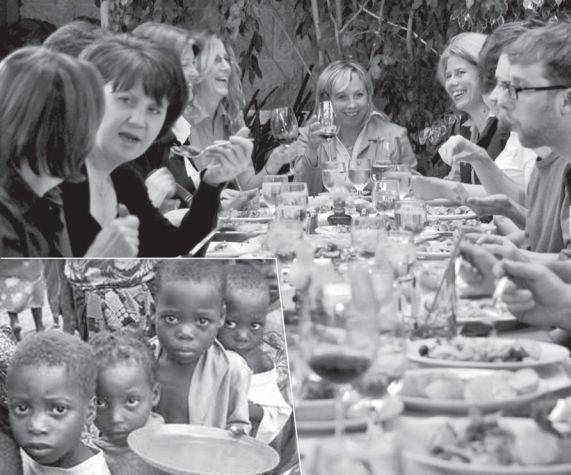 “We asked our expert, writer and political scientist Nikolai STARIKOV, to answer this question, who has already said that there will never be a western democracy all over the world, as someone must work for beggarly pay to ensure a full life for the United States and Europe. Why did we give this particular quote of him? Because in it is a direct link with our question.

Bolivar can not take two

The problem of overpopulation in the sense that it is served by the Western media does not really exist. Because if we proceed from the basic postulate that every person’s life is equally valuable - that the poor man born in India, that the rich man born in the family of a billionaire in the USA, then this problem cannot exist in principle.

Humanity must develop such agricultural technology to feed everyone. You can not sort people into the first, second and third grade. And if there are not enough products, it means that the third variety does not feed at all - this is racism, fascism.

What does the West offer us? The West constantly talks about this overpopulation, so it quietly launches programs to reduce the population through epidemics, through the propaganda of homosexuality, through the consumer lifestyle, and so on. Why is he doing this? Because he is well aware that not the whole “golden billion” lives well today. This iceberg is melting. And if another billion Chinese will join this billion, then Bolivar will not endure two and it will all go to the bottom right away.

Speaking of democracy, a good life, and so on, they understand perfectly well that the entire population of the Earth should never live like this. They don’t want to work, but someone has to. Western enterprises moved to China, and where will these enterprises move from China? To mars? Will the Martians work so that the Chinese also play the stock market and produce nothing?

No, someone should really do the work, producing those products, those things that consumes the entire population of the Earth.

Since our geopolitical "friends" of life have not yet discovered life on Mars, it means they need someone to work for them on Earth. And the one who will work for them on Earth should receive a little money, otherwise the whole economy becomes unprofitable. Previously, they used slave labor. Why did they go in such a difficult way? Why did they steal people in Africa, starve them on the way? Because if they hired some white settler in the same America, then cotton would be very expensive. Simple economics. So, someone has to work for three kopecks. This is already the first step in that direction, that he cannot live as well as the one who hired him.

But they can't tell people about it. They cannot tell 90% of the world's population that talking about democracy is really nonsense, that you will never live like us, and that we will do everything so that you never live like this because our entire economy rests on the exploitation of your labor. Therefore, it is easier to reduce the population: epidemics, instability, which also leads to death in the end.

Look what is happening in the Middle East. Here is their path.

The course of instability

As for the way of the sensible part of humanity, I am sure that if the food resources that are on the planet were evenly distributed, then there was no hunger on Earth. You see how many products are thrown out in the West, and how many people are starving in Africa. For some reason, the more they help hunger strikers in Africa, the more hunger strikers in Africa turn out to be. Because the entire system of the West is built to lead the greatest possible genocide of the population of the countries that work for them.

They need only those who work for them, the rest are not needed - they are not going to feed them. Therefore, there is constant instability, wars that prevent these countries from developing and rising to the level of the leading countries of the world.

Look, for example, what did the Americans do with Iraq? They bombed it into the stone age, relatively speaking. Why? Iraq will develop - industry will grow, the economy and people will grow, God forbid, from the point of view of Americans, they will want to live like the Americans themselves. And we remember that Bolivar cannot bear two. Therefore, it is necessary under any pretext to invade, destroy, destroy and pump out resources from there.

Only for this reason, within the framework of the current financially-oriented system, the problem of hunger on Earth cannot be solved in principle. When humanity comes up with a fairer device, then the problem can be solved quite easily. " 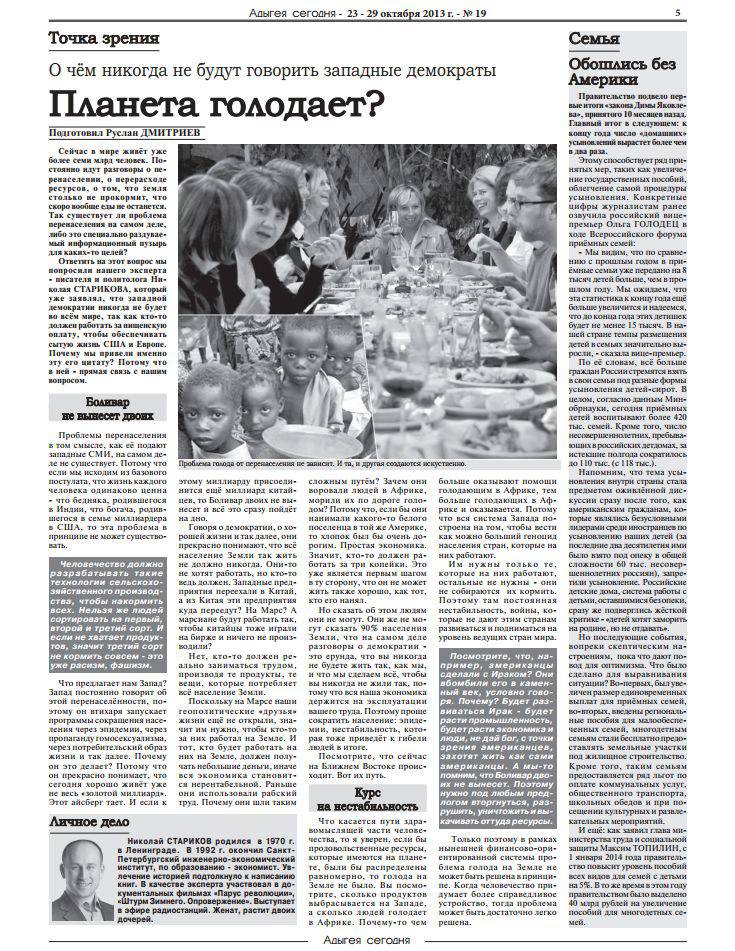 Ctrl Enter
Noticed a mistake Highlight text and press. Ctrl + Enter
We are
A great interview with Sergey Lavrov: about Ukraine, Obama and IranWhat you didn't want to know about England
59 comments
Information
Dear reader, to leave comments on the publication, you must to register.