The problem of shortage of fresh water on the planet 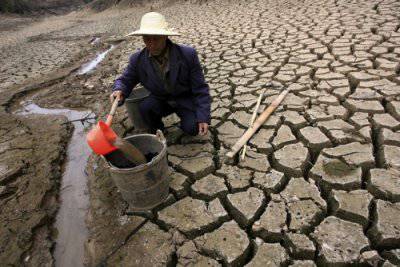 Already on the planet manifests itself a shortage of clean fresh water. In order not to depend on a centralized water supply, many homeowners use equipment to drill their own wells. Drilling water artesian wells - it is profitable and safe.
However, this drilling is far from being everywhere to allow, and far from everywhere it is possible to enter pure artesian water with the help of drilling. The crisis of fresh water, according to experts, can lead to much more bloody wars than even the current war for hydrocarbons or the previous war for gold. If a person can live without gold and oil, replacing them with other resources, then it is simply impossible to replace water. Its role in the existence of life itself on our planet is decisive.
According to the calculations of specialists, today on our planet there are about 1,4 billion cubic meters of water. Only here 97,5% of this water is salty water. Total 35 million cubic meters - fresh water. Moreover, this water is not all its volumes refers to drinking. Due to the continued aggressive use of water by humans, including for technical purposes, of these 35 millions - 7,5 millions are not suitable for drinking.
Especially African countries are suffering from a shortage of fresh water in the world. Problems are experienced by the countries of Central Asia and the Middle East. In Israel, where desalination is established, there are no problems, at first glance. However, in reality, these problems are multiplying. As an example - the forced departure of farmers from those lands that were watered with desalinated water. The residual percentage of salt manifested itself over time, turning the land into a barren desert. In order to prevent such a process, it decided not to use the water that was desalinated according to the available technologies when irrigating farmland. It was decided to significantly improve the process, which reduces the percentage of residual salts to a minimum.
If no significant steps are being taken to improve the quality of freshwater in the near future, then by the 2030 year on the planet only 2 billion people from 7,5 can have access to clean water. Most will be forced to drink dirty or contaminated water, which without additional protective measures will lead to an outbreak of infectious diseases. As a result - the decline in the number of inhabitants of the planet. On the one hand, natural self-regulation, on the other hand, a humanitarian catastrophe. The problem is serious, and it should be solved now with the use of resources from developed countries.
Ctrl Enter
Noticed oshЫbku Highlight text and press. Ctrl + Enter
We are
The next wave: race to the wars of robotsWars for water