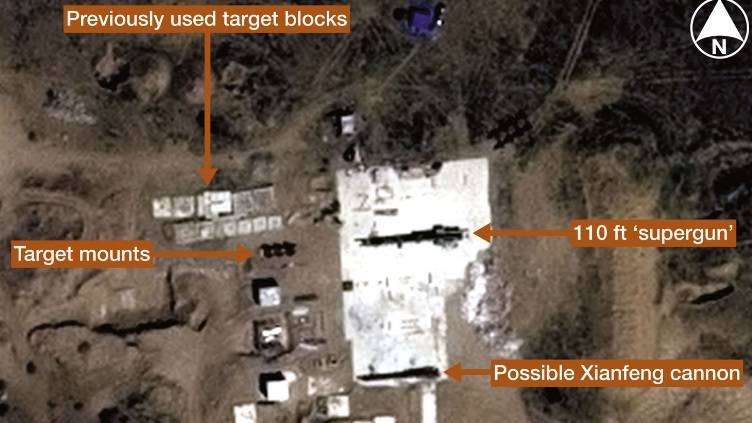 The satellite image shows two cannons mounted on concrete foundations (one is 33,5 long and one meter is second 24). The first pictures appeared between September 2010 of the year and December of 2011 of the year, satellite imagery confirmed that in July of 2013 of the year the guns continued to be in this place. Probably, these guns are used to test high-speed ultra-long-range projectiles.


China has historically shown an interest in building long-range artillery. In the 1970s, experiments were conducted to create the Xianfen supergun as part of the 640 anti-missile project. The program was canceled in 1980's.

In 1990's, it became known that China created a test bench similar to the Iraqi Babus supercannon (Project Babylon, photo below), developed by engineer Gerald Bull. It is known that this designer in 1980-ies took an active part in the design of Chinese ultra-long artillery systems. The work was carried out by the artillery design bureau of the China North Industrial Corporation (China North Industries Corporation - Norinco).

Artillery guns in Baotou are structurally similar to the Babylon, which theoretically could shoot at extra large distances or destroy low-orbit satellites. Although these gun systems are similar in concept to the super-gun Bulla, it seems unlikely that Beijing will use them to create long-range artillery or conduct anti-satellite operations, since it creates ballistic missiles for these purposes.

In addition, these devices can be a prototype of the railgun, although this is also unlikely, since it cannot be seen near a large energy source. Another possibility is that China is using these outdated devices to test heavy duty projectiles.

Ctrl Enter
Noticed oshЫbku Highlight text and press. Ctrl + Enter
We are
Jen Psaki said she knows nothing about the satellite image of the attack by a Malaysian Boeing fighter
68 comments
Information
Dear reader, to leave comments on the publication, you must to register.