20 million Russians will withdraw from the "shadow"

November 19 2013
96
The Ministry of Economic Development continues to search for ways to increase revenues to the state budget.


According to data released by the Ministry of Economic Development, about 20 of millions of Russians are working, quote: “in the shade”: someone is digging potatoes for money, someone is engaged in tutoring at home, someone is sewing clothes, someone is designing websites, someone legal assistance through the Internet provides. Using some progressive formulas, the Ministry of Economic Development considered that all these 20 millions of “shadow businesses” (by the way, a few months ago the figure was already expressed in 39 millions of working people “in the shadow” of Russians) do not allow, let's say, to get all budget segments around 240 billion rubles per year.

To make this money flow into the state treasury, officials of the Ministry of Economic Development decided to come up with an initiative to issue a special type of patent to self-employed (this is the term from the Ministry of Economic Development), allowing them to carry out this or that activity without registering with the tax structures of the individual enterprise. The preliminary cost of such a patent is also determined and amounts to one thousand rubles a month. Those who do not want to get such a patent are reminded of possible problems of an administrative and even criminal nature - the responsibility of individuals for not paying taxes from certain incomes. In other words, if you earn money by, for example, walking with a button accordion at weddings or selling vegetables grown in your own garden on the market, the Ministry of Economic Development tells you: buy a patent for employment, and work for your pleasure. From the amount that a person will pay when buying a patent, funds will be deducted to social funds. The patent itself is a kind of analogy of a patent that today is issued for labor to a migrant who has arrived in Russia.

On the one hand, everything looks reasonable. If a person conducts a certain type of activity that brings him income, then by law he must attend to paying taxes. If a person receives income, but does not pay taxes from this income, then, again, according to our laws, he is a violator of tax legislation. Yes ... And the old woman who sells seeds at the station, and not the most successful artist, who managed to sell one of the 199 paintings in his garage a year ... The law is harsh and he makes these people need to register their "business", or on a new proposal for the purchase of a patent.

On the other hand, the law in our country is harsh, but only a scythe. After all, having returned to the proposal of the Ministry of Economic Development, it turns out that a teacher who wants to add additional income to his meager salary, giving several private lessons a month at home, is an infringer (or even a criminal), then an official , which caused billions of dollars in damage to the state treasury by the fact that “behind his back someone inappropriately disposed of state property” - the injured person ... Some, you know, need to be brought out of the “shadow” without fail, and you think that money is “shoveling” unbeknownst to Min konomrazvitiya ... And the other - you need at the state level, moral support, a new warm place with a benefits package and perks to arrange.

No one argues with the fact that taxes on income received must be paid. This is the law. But you just need to monitor the observance of the law, not only by the merchants of seeds, and not only by the wedding accordion ... Or is the law with us all the same selective even in this direction? .. 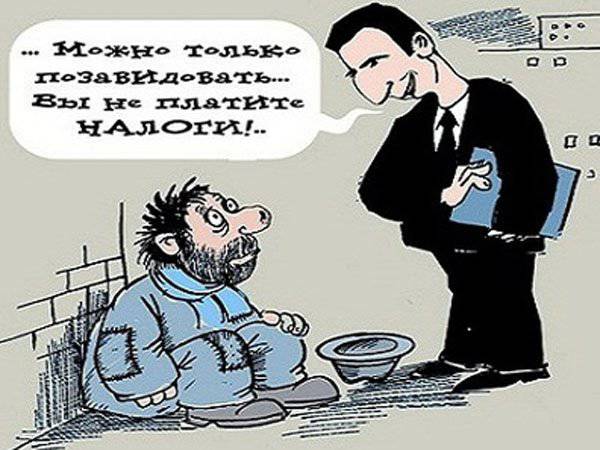 By the way, it is worth touching on the more than the piquant question of the illegal business in every sense of the word. Well, for example, will the priestesses of love, who in the evening sometimes with whole “jambs” float to the “fish” places of large cities, will buy a patent? .. Also, the “shadow” employment ... Answer: of course they won't, because their activities is illegal, and tax authorities are not going to give patents for illegal activities, because law enforcement agencies should prevent illegal activities ... But the whole problem is that it is often law enforcement agencies who are involved in issuing “patents” of to the criminal business (from the business of prostitution to the activities of underground casinos). Here, obviously, not to pay rubles per month for 1000, but the principle is the same - pay for our “patent”, and we give you easy to work ... And it’s the same work, and they manage to ignore the criminal law letter completely. But in the end it turns out that the “free artist” who did not buy the patent (at least the same notorious wedding accordionist) may turn out to be in the development of “organs”, and Snezhana’s “moth” (yes, all law-abiding Snezhana) will not with the law, or rather, with the head of the ROVD on “you” (well, or on “you” with the head of the ROVD, not she, but her “snow conveyer”) ...

With the onset of the global crisis, and especially after the introduction of new (twice the previous ones) deductions from entrepreneurial activities, many Russians from the number of entrepreneurs who suffered fiasco found themselves in difficult conditions. The burden on the business for many has become unbearable. If in January 2012, the number of registered entrepreneurs and those entrepreneurs that ceased their operations was almost equal, today the closing structures of private (usually small) business are almost 3 times more than the opening ones (less than 40 thousands are open, only 112 thousands are closed in one month). Over the past year, the number of IPs closed by more than 400 thousand exceeds the number of IPs open! This is a clear indication that in the approaches to the base of private business in Russia you need to change something publicly ... If you do not change further, but rely on "stick" measures, then people, concerned about the fact that the state frankly distances itself from support small businesses, will try to look for other options for the application of their forces and opportunities for income. Hence the increase in the number of "shadow".

A man once opened a clothing repair workshop, in which, in addition to him, there were, for example, two more people, regularly paid all the required deductions, conducted a legal private business. Then an unexpected idea from the state - to increase the deductions to various funds by half, and the sewing workshop (like thousands of other similar entrepreneurs) was unable to withstand such a burden. To work at a loss, being credited in banks, just to “get rid” of the tax authorities is no longer a business, but masochism ... The only way out is not to close the workshop, but to close it legally. And now no deductions, no taxes ... And who benefited from this? State - no? The staff of this workshop is also not, because they have to work at their own peril and risk. And now the Ministry of Economic Development encourages such employees to acquire patents for work. One of the variants of what this may lead to under the current system is a rampant corruption. The fact is that if a person receives a patent, then he indicates exactly where he works, and what type of activity he does ... And if so, then the same regulatory bodies will also be interested in the employer who provides such services. The employer has the following outputs: a) spit on everything and close his workshop, b) get out of the shadows and get bogged down in debt, c) give him a “paw” to fall behind ... The third option, for some reason, seems the most realistic in the face of harsh reality. .. I would like to believe that this is a deep mistake of the author ...

As they say, there is something to strive for ...

Ctrl Enter
Noticed oshЫbku Highlight text and press. Ctrl + Enter
We are
Preliminary evaluation of the prototype of the unobtrusive Chinese fighter Chengdu J-XX [J-20]Geopolitical mosaic: DPRK threatens enemies with a "special tool", and Mitt Romney caught up with Barack Obama
96 comments
Information
Dear reader, to leave comments on the publication, you must to register.