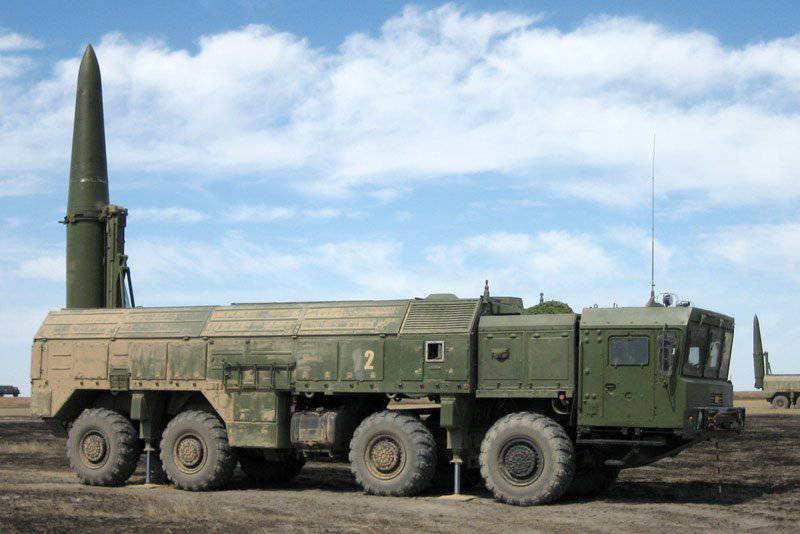 Today, at the Kapustin Yar range in the Astrakhan region, Rostec State Corporation, affiliated with the Scientific and Production Corporation “Engineering Design Bureau” (NPK “KBM”), transferred to the Russian Defense Ministry weapons and military equipment of the Iskander-M missile system to equip the missile brigade of the Southern Military District ( JUVO). Thus, NPK KBM successfully fulfilled the state defense order for the supply of brigade sets of the Iskander-M complex for 2013 a year.

Starting positions, a deployed command post, combat vehicles and missiles were demonstrated at the test site. An electronic launch of training missiles simulating the application of a conventional group missile strike was also made.

Before the adoption of the Iskander-M complexes, military personnel from the missile brigade of the Southern Military District underwent a two-month training at the Training Center for Combat Use of Rocket Forces and Artillery of the Ground Forces in the Astrakhan Region.

“NPK KBM clearly and on time fulfills all obligations regarding the complete delivery of Iskander-M to the troops,” said Valery Kashin, general director and general designer of KBK NPK. “Today, KBM is the only supplier of tactical missile systems in the interests of the Ministry of Defense.”

The Iskander-M missile system significantly surpasses the best foreign analogues in its class in accuracy and speed in preparing missiles for launch. In addition, the complex can be equipped with various types of missiles. Iskander-M has a high probability of overcoming the enemy's missile defense due to a unique stealth technology. The rocket maneuvers with high overloads and flies along an unpredictable trajectory for the enemy.

In 2011, NPK KBM and the Ministry of Defense signed a long-term state contract for the supply of 10 brigade sets of the Iskander-M complex to equip the rocket brigades of the Russian ground forces. It will allow the Ministry of Defense to fully equip the Iskander-M complexes with the missile brigades of the Ground Forces of the Russian army, and NPK KBM to plan its activities and the activities of cooperation enterprises for the long term.

Under the terms of the contract, starting from 2013, NPK KBM should transfer to the troops two sets of the complex per year. The first delivery in accordance with the schedule approved by the General Staff of the Ministry of Defense took place at the end of June of this year. For the first time, it was implemented as a complete set, which is a fundamentally new approach, both for industrial enterprises and for the armed forces. Prior to this, elements of the complex were sent to the troops separately, under separate contracts, which did not provide either the required rate of rearmament or a single approach to pricing.

In the future, the complex will become the basis of the Russian Land Forces rocket formations.

Rostekhnologii State Corporation (Rostec) is a Russian corporation established in 2007 to promote the development, production and export of high-tech industrial products for civil and military use. It includes 663 organizations, of which 8 holding companies in the defense industry complex and 5 - in civilian industries are currently formed. Rostec organizations are located on the territory of 60 subjects of the Russian Federation and supply products to the markets of more than 70 countries. Rostec's revenue in 2012 amounted to 931 billion rubles, net profit - 38,5 billion rubles. Tax deductions to budgets of all levels exceeded 109 billion rubles.
Ctrl Enter
Noticed oshЫbku Highlight text and press. Ctrl + Enter
We are
Innovation Day of the Southern Military District: the Uran-6 robotic complexInnovation Day of the Southern Military District: Pictures from the Exhibition
75 comments
Information
Dear reader, to leave comments on the publication, you must to register.