November 13 2013
0
In the distant stories there are those days when people challenged each other to a duel. These were times of real romanticism, when men were ready to sacrifice their lives for the honor of an adored woman or the honor of their own uniform. Today the phrase "I call you on duel"Looks either ironic, or the word" duel "means a certain computer game with the appropriate rules. 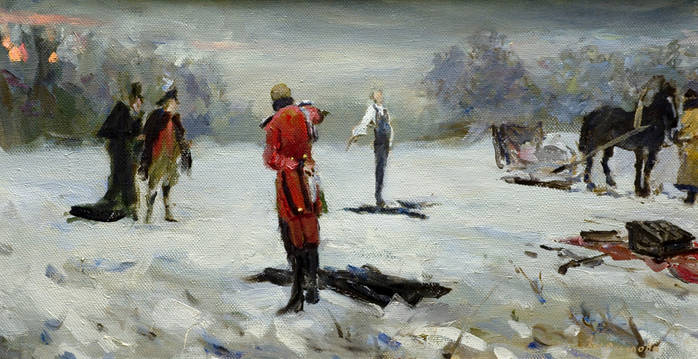 In former times, the duel was surrounded by numerous attributes. People who participated in duels and at the same time remained alive and unharmed, knew every subtlety of this procedure. Duels were described by masters of the word, they were celebrated on paintings and musical works.
In a number of countries, any self-respecting man was obliged to know perfectly the duel code, which to the smallest detail described the rules for challenging an opponent to a duel, the rules for attracting seconds and many other nuances. In the same code was listed information about the possible reasons for the challenge to a duel. In the French duel code, an insult to the personality of a person, his friend or lover was considered the reason for calling for a duel. In Russia, the official duel code as such did not exist until the 1912 year. The Durasov Code was issued exactly 101 a year ago, only by that time the duels became a real move and people tried to figure out the relationships more routinely - where through the courts, and where just fists. The era of duel romanticism by that time was finally in history.
A Russian duel, for example, in the 19 century, according to unofficial canons, could begin not only because of a direct insult. The officers considered it a reason to challenge the opponent to a duel, even if he allowed himself a longer look at the lady's heart than the look that was allowed by the unspoken rules. The duelists converged at the appointed place at the appointed time. Before that, they chose a duel option. If pistols were chosen, then it was necessary to determine with the distance of the shot and how to make this shot - while standing still or making steps towards the opponent.
In some cases, invited to a duel, even close relatives or friends in the capacity of, as they would say, support groups. But in most cases, in addition to the duelists and the doctor themselves, only seconds could be in a duel. All the rest were instructed not to approach the place of the duel for a short distance.
Ctrl Enter
Noticed oshЫbku Highlight text and press. Ctrl + Enter
We are
Borodino battle in the paintings of artistsChronicles of the Second World War: women in war