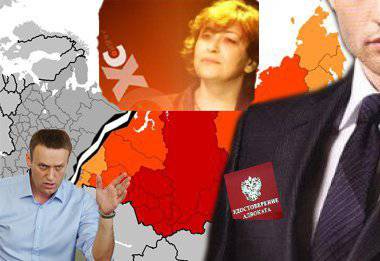 The advocates of separatism showed up.


When a PhD from the HSE calls upon to give our Arctic under international jurisdiction, a columnist for the liberal “Echo” prepares the listener for “worthlessness” of the collapse of the country along the Ural ridge, and “the main opposition blogger” yells “enough to feed the Caucasus!” - it’s time to take action.
It would be surprising if in a country with sovereignty, no one would have thought about a timely and adequate response to the growing threat. Therefore, the draft law on the introduction of criminal responsibility for the propaganda of separatism and the undermining of the territorial integrity of Russia has become more than expected. The initiative was initiated by United Russia deputies Anton Romanov and Yevgeny Fyodorov, as well as a member of the Just Russia faction Mikhail Yemelyanov.

The deputies proposed to introduce in the Criminal Code of the Russian Federation a new article “Promotion of separatism”, which provides for punishment for the corresponding violation in the form of imprisonment for a term from 3 to 6 years. Production and demonstration of promotional and informational print and video materials of the separatist persuasion are proposed to be punished with prison sentences from 5 to 7 years, and public expression of sympathies for separatist movements - up to 3 years.

If the same actions were committed using official position or the media and information and telecommunication networks, including the Internet, the term of imprisonment will be from 10 to 20 years.

Argumentation: "Ideas of separatism are spread in our country by both citizens and organizations with the support and funding of foreign states." The authors of the legislative initiative propose to suppress the ideology of separatism not abstractly, but to track all possible forms of its manifestation “in the vastness of the media, TV, the Internet, pseudoscientific seminars and symposia, culturalhistorical events and exhibitions, when duplicating books ”.

As emphasized by lawmakers, Russia in this matter is far behind the advanced "democratic countries." There, persons engaged in separatist activities, in particular, propaganda, can be held criminally liable.

Actually, this could put an end to, wishing the State Duma and the Federation Council to adopt the proposed law as soon as possible. After all, even a person far from politics is clear: the unity of Russia is the most important condition not only for its successful development, but for its physical existence.

It would seem that society should support the initiative unanimously, regardless of the ideological group and other preferences. But it was not there!

Moreover, the “opposition point of view” appeared at lightning speed. And not just appeared, but became a wide public domain. On the same day, when deputies made a bill, the first news “Yandex” becomes the following: “Lawyers: punishment for a call for separatism is contrary to freedom of speech.” In turn, “Yandex” took information from the site of one of the leading and, as it were, state news agencies.

It turns out that there is some RAPS (Russian Agency of Legal and Judicial Information). And here it is “on fresh tracks” literally rushed to interview lawyers. The respondents "were critical of the parliamentary initiative to introduce criminal liability for calls for separatism, considering it an encroachment on freedom of speech and believing that such a rule would be applied more to fight the opposition."

Such hitherto little-known in wide circles “stars” of the Russian legal profession, such as Stalin’s lawyer Gurevich, analyst of one of the human rights associations Ramil Akhmetgaliyev, and also some lawyer Alexey Kasatkin, doubted and criticized. He outlined his position with the following passage: “Dear State Duma deputies forget about the provisions of Article 5 of the Constitution of the Russian Federation, according to which the peoples in the Russian Federation are recognized equal rights and the right to self-determination.”

Before us are almost not hiding themselves advocates of separatism. They understand by political opposition those forces that preach separatism. They are ready for their own interpretation of the articles of the Constitution of the Russian Federation. The same article 5.

At the same time, it is very strange not only that there are forces in the society with separatist sentiments. After reading several articles of the same deputy Fedorov, you can get some information about the possible nature of the occurrence of such forces.

More puzzling and even provocative is the attitude to the question from a number of employees of significant media structures, providing a platform for replicating these moods as widely as possible. It seems that separatism, as one of the most effective means of “painful” impact on the Russian Federation, is listed as “most valuable” and will be “defended” at any price.

Ctrl Enter
Noticed oshЫbku Highlight text and press. Ctrl + Enter
We are
Reading the Criminal CodeEvgeny Fedorov: "Russian business on the hook of the USA"
32 comments
Information
Dear reader, to leave comments on the publication, you must to register.