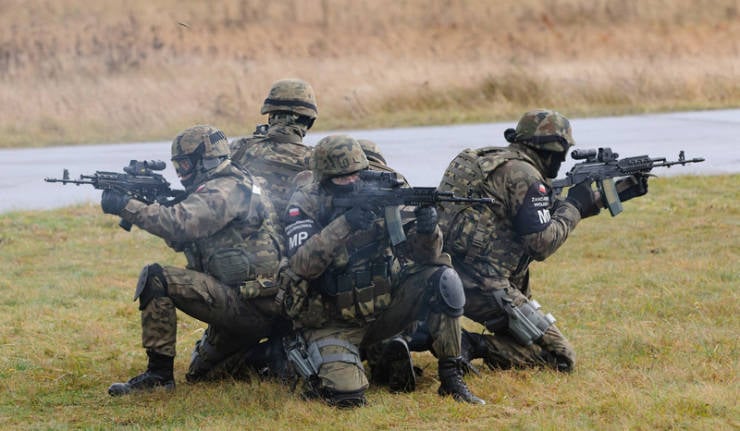 The largest since the beginning of the century NATO military exercises Steadfast Jazz ended today in Eastern Europe. The exercises were held on 11 test sites in Poland and the Baltic countries with participation of over 6 thousands of military, 350 armored vehicles, 13 ships and more 50 aircraft and helicopters. In the command and command part of the exercise, field staffs 8 took part.


Philip Breedlove, Supreme Commander of NATO Combined Armed Forces in Europe, stated that all the exercises' tasks were successfully accomplished, and Brunysum, who led the maneuvers of NATO Joint Forces Headquarters, will be certified to command the 2014 Rotation Alliance Response Force.

Commenting on the course of the exercises, NATO Secretary General Anders Fogh Rasmussen told ITAR-TASS that these maneuvers "are not directed against Russia."
“We did what the military should do - we trained and tested our capabilities,” Rasmussen explained. “We are working to increase the ability of the alliance’s forces to work effectively together.”

He also did not rule out that in the future Russia and NATO could jointly conduct military maneuvers. "Why not?" - he said. Rasmussen "highly appreciated" the fact that Russian observers were present at the demonstration phase of the exercise, just as NATO observers visited the Russian-Belarusian "West-2013" maneuvers in September of this year.

“They saw everything with their own eyes. I expect that after these exercises we will have a discussion in the Russia-NATO Council on how we can develop this level of transparency. Since transparency and predictability are the best way to overcome possible misunderstandings and misinterpretations each other’s actions, ”Rasmussen concluded.

In turn, the head of the delegation of the Russian General Staff, who visited the demonstration part of the exercises, expressed gratitude to the NATO leadership for inviting these maneuvers. "This is a useful experience. The opportunity to see elements of the combat training of the forces of the alliance, ensuring interaction between contingents of different states, is certainly of interest," he said.

“Inviting observers to each other’s teachings contributes to increased military transparency and trust between us,” he said, recalling that Russia “gave NATO representatives the opportunity to see the West-2013 exercises in September.”

"Of course, we, the military, consider these alliance exercises exclusively from a military point of view, without affecting any political aspects," he concluded.

Teachings "Stadfast Jazz" opened a new page in stories NATO - a return to the practice of major military maneuvers in Europe. According to available information, the alliance has already begun planning the 2015 exercises of the year in Spain, Italy and Portugal, in which 30-40 thousands of military can take part.

This is due to the fact that in 2014, the alliance must completely complete the withdrawal of its troops from Afghanistan, the war in which served, in particular, as the most important factor in the combat training of NATO military. In peacetime, this organization needs major exercises to maintain the ability of the military countries of the alliance to effectively interact with each other. In addition, the program of these exercises should become the ideological core of the future development of NATO, without which a military alliance in peacetime and in the absence of a potential adversary could lose the meaning of its existence.