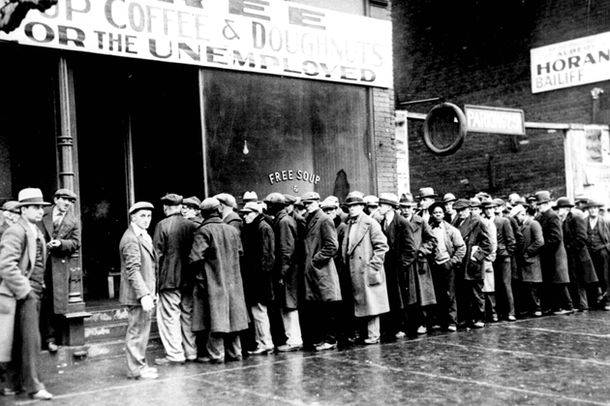 In american stories there is a fact of crime against its own people - this is the so-called Holodomor 1932 / 33 of the year, as a result of which the United States missed millions of its citizens.


About this, as well as the genocide of the indigenous people of America, one cannot find condemning resolutions of the congress, angry speeches of American politicians, "memorable signs" built on the anniversary of the mass destruction of people and other signs of memory. The memory of this is reliably bricked up in forged statistics reports, in the archives cleared of evidence of crimes, charged to the "invisible hand of the market", varnished by panegyrics about the genius of President Roosevelt, and the happiness they organized for the nation of "public works". Here are some facts based solely on American sources.

Attempting to get acquainted with the official demographic statistics of the United States is staggering from the very beginning: 1932 statistics for the year were destroyed - or very well hidden. They simply do not. Without explanation. Yes, they appear later, in the statistics later, in the form of retrospective tables. The study of these tables also leads the attentive researcher to some amazement.

First, if you believe the American statistics, over the decade from 1931 to 1940 a year, the dynamics of population growth in the United States lost as many 8 million 553 thousands of people. Moreover, population growth rates change immediately, at one time, two (!) Times exactly at the turn of 1930 / 31, they fall and freeze at this level for exactly ten years. And just as unexpectedly, a decade later, they return to their previous values. There is no explanation for this in the extensive, hundreds of pages, text of the US Report of the US Department of Commerce "Statistical Abstract of the United States", although it is filled with explanations on other issues that are not even compared to the above.

Any responsible demographer will tell you that a one-time double change in population dynamics in a huge hundred million country is possible only as a result of a massive loss of life.

In total, according to calculations, in 1940, the US population, while maintaining the same demographic trends, should have been at least 141,856 million people. The actual population of the country in 1940 was just 131,409 million, of which only 3,054 million are explicable due to a change in migration dynamics.

7 million 394 thousands of people as of 1940 year are simply missing. There are no official explanations on this issue.

The beginning of the thirties is a real humanitarian catastrophe in US history. In 1932, the number of unemployed reached 12,5 million. This is with all the population of the States - including children and the elderly - in 125 millions. The peak came at the beginning of 1933, when there were already unemployed people in America before 17 millions - with family members, this is about France or Great Britain completely unemployed!

The administration has not had a federal program to combat unemployment for a long time, and the problems of the unemployed were passed on to state authorities and city municipalities. However, almost all cities have become bankrupt.

In America, hunger began when even in the most prosperous and richest city in the country, New York, people began to die en masse from starvation, which forced the city authorities to begin distributing free soup in the streets. However, not all states had enough money even for free soup.

Every sixth American farmer fell under the famine rink. People went nowhere, deprived of land, money, their home, property — into uncertainty covered by mass unemployment by hunger and indiscriminate banditry.

Roosevelt’s “community service” became the catalyst for this mass of unnecessary population. A total of 1933-1939. in public works under the auspices of the Public Works Administration (PWA) and Civil Works Administration - Civil Aviation Administration (CBA) (this is the construction of canals, roads, bridges often in uninhabited and swampy malarial areas), with a one-time employment to 3,3 million. In total, 8,5 million people passed through the American Gulag of community service, not counting the prisoners themselves.

Later American statistics contain data on the age distribution of surviving children, as of 1940 year. And if in 1940, the number of births in 20's is 24 million 80 thousand, then, while maintaining this demographic trend in 30's, at least 26 million 800 thousand children should have been born. But in the generation of those born in 30, the shortage of 5 millions of 573 thousands is striking! Perhaps, so reduced fertility? But even in 40, during the Second World War, despite all the losses and millions of men called up for military service, the birth rate has recovered, almost to the same level. The enormous demographic losses of 30's cannot be explained by any “reduction in the birth rate”. This is a consequence of the huge number of additional deaths, the trace traced to the millions of lost children's lives, is the black mark of the Great American Famine.

Here are the real memories of the child about these years: "We replaced our usual favorite food with more affordable ... instead of cabbage we used leaves of bushes, ate frogs ... within a month my mother and older sister died ..." (Jack Griffin)

Especially high - the beyond - death rate then touched on the minorities of the United States. National minorities have never been in the United States a special concern, but what happened during the Great Depression directly borders on genocide. If after the first genocide of indigenous peoples, which lasted almost until the beginning of the twentieth century, during the 20-s, the number of national minorities and indigenous peoples increased by 40% over the decade, then from 1930 to 1940, their number not only did not increase, but, on the contrary, decreased significantly . This means only one thing: in the beginning of the 30-x of the minority diaspora, they simultaneously lost up to several tens of percent of the original population.

Against the background of mass hunger and the death of the "surplus" population, the US government is also noted that, in these years, for the sake of certain circles, namely the agrarian business lobby, in significant quantities and systematically destroys the country's food reserves. Of course, quite "market methods". It destroys diversely and in a big way: the grain was simply burned and drowned in the ocean. So, for example, 6.5 million pigs were destroyed and 10 million hectares of lands were harvested with the crop.

The goal was not hiding. It consisted in the growth of food prices in the country more than twice in the interests of agro-capital. Of course, this completely coincided with the interests of big capitalists from agriculture and stock trading, but it was unlikely that the hungry really liked it.

Ctrl Enter
Noticed oshЫbku Highlight text and press. Ctrl + Enter
We are
Our memory. Brest Fortress. Part of 1Our memory. The power and greatness of the locomotive
41 comment
Information
Dear reader, to leave comments on the publication, you must to register.