For separatism offer to plant on 20 years 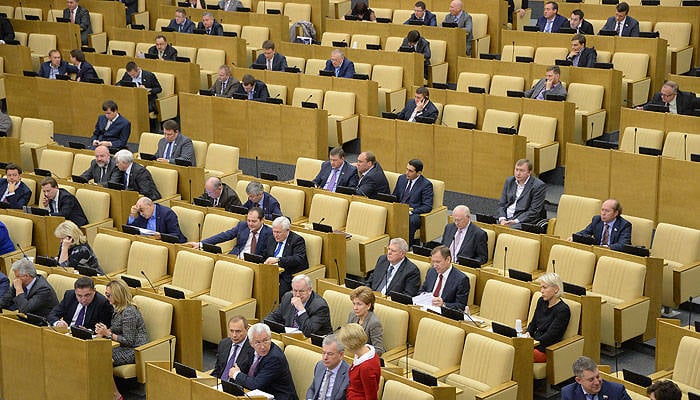 A draft law has been submitted to the State Duma of the Russian Federation, which provides for imprisonment of up to six years for propaganda of separatism, and for organizational activities and public calls for separatism in the media and the Internet - up to 20 years.

The deputies propose to supplement the Criminal Code of the Russian Federation with an article that will provide for responsibility for a wide range of actions: ranging from spreading the ideas of separatism and denying the territorial integrity of Russia to the creation of separatist organizations.

So, for the propaganda of separatism is proposed to plant up to six years. For the manufacture, storage, distribution or advertising of separatist materials can imprison up to seven years. Sympathy for separatism or public denial of Russia's territorial integrity may result in a three-year term.

For officials and for appeals to separatism through the media and the Internet, the punishment is stricter - up to 20 years.

The new law provides for punishment not only for the so-called separatists, but also for those who finance their actions: for such an act they can imprison up to 10 years.

All penalties are accompanied by a prohibition to hold certain positions from 10 to 20 years and restriction of freedom for a period of one to two years.

In addition, the document provides punishment for propaganda and demonstration of Nazi symbols: for citizens it is a fine of 2 - 5 thousand or arrest up to 15 days, officials are fined 5 - 10 thousand rubles, legal entities - 50 - 300 thousand rubles.

Russia's sovereignty - the red line, for which you can not go

President Vladimir Putin has repeatedly spoken about the inadmissibility of separatism. In particular, in September at a meeting of the Valdai Club, he stressed that "Russia was formed precisely as a multi-ethnic and multi-religious state." “By questioning our multinationality, starting to exploit the theme of Russian, Tatar, Caucasian, Siberian, and any other separatism and nationalism, we embark on the path of destroying our genetic code, in fact, we begin to destroy ourselves,” Putin said.

He also stressed that "the sovereignty, independence, integrity of Russia are unconditional, these are the red lines for which no one can go."

Chairman of the Committee of the Public Chamber of Russia on interethnic relations and freedom of conscience journalist Nikolai Svanidze considers the adoption of a law on separatism inappropriate.

In his opinion, it is necessary to define clear criteria for the concept of separatism. He admitted that he did not fully understand what appeals to separatism are.

“Appeals similar to those made by Vladimir Zhirinovsky about enclosing any part of Russia with barbed wire fall under this law? Call to stop feeding the Caucasus, which are popular not only on the Russian march, but also among fairly moderate people nationalist views? If the analyst says that such a tactic can lead to the separation of a particular region of the country, does he call for separatism? " - said the chairman of the committee.

Svanidze believes that the country's integrity is threatened not by the phenomena identified in the bill, but by the lack of a clear national policy.

"Calls for something are secondary, the main thing is the socio-political mood, as well as the adoption by the state of a line, primarily socio-economic, without which it is impossible to maintain the interest of one or another part of the country or region to live together. And by law for appeals to separatism it is possible to even quarter. Separatist sentiments will not go anywhere, "- said the journalist.

Ctrl Enter
Noticed oshЫbku Highlight text and press. Ctrl + Enter
We are
Day dog ​​handlers MIA. How police dog breeding appeared and developedUkrainian MPs are considering a bill on liability for the denial of "Russian aggression"
24 comments
Information
Dear reader, to leave comments on the publication, you must to register.