China under the blow of the Islamists 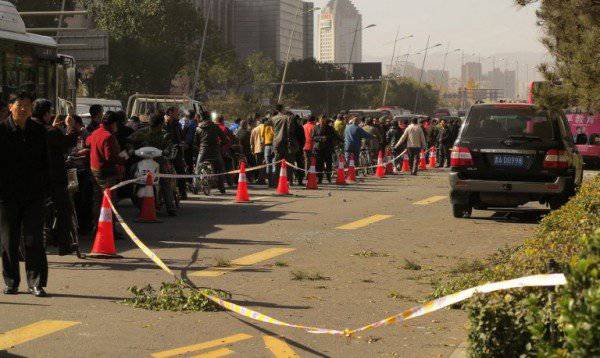 On Wednesday morning, 8 explosions thundered in the Chinese city of Taiyuan (Shanxi Province in the north). The terrorists laid bombs in front of a complex of buildings of the regional party committee of the Chinese Communist Party (CCP). Responsibility for the terrorist act until no one took.


Explosions thundered in 07: 40 local time near the buildings of the Shanxi Provincial Party Committee of the CPC. The terrorists laid eight improvised explosive devices in decorative flowerpots, which are located along the roadway. According to the law enforcement agencies, in order to enhance the destructive effect, the criminals filled explosive devices with metal balls. As a result of the explosions, one person died, another seven were injured. In addition, about two dozen cars were damaged. The terrorist act occurred shortly before the opening of the plenum of the Central Committee of the Communist Party of China (scheduled for November 9-12). At the plenum, several important decisions should be made, in particular, concerning the economic policy of the People’s Republic of China.

So far no one has taken responsibility for the bombings in Shanxi Province. However, experts draw attention to the fact that last Monday in China there was another resonant terrorist attack: in the central square of the Chinese capital, a jeep with numbers of the Xinjiang Uygur Autonomous Region (XUAR) drove into a crowd of tourists at high speed and then ignited. As a result, the driver, his wife and mother (they were in the car) and two tourists - a citizen of the Philippines and a citizen of China died. About forty more people were injured. Responsibility for the attack was placed on separatists from the movement of the Islamic Movement of Eastern Turkestan. This was stated by the secretary of the political-legal commission of the Chinese Communist Party Central Committee Meng Jianzhu.

In fact, it was the first in stories The PRC is the case of an Islamist attack on the Chinese capital. According to Chinese media reports, overseeing public safety issues in the Chinese leadership, Meng Jianzhu spoke at the executive committee of the Shanghai Cooperation Organization's Regional Anti-Terrorist Structure about the terrorist attack in the Chinese capital and called on SCO members to step up the fight against terrorism.

The “Uigur trail” speaks of the affiliation of the five people who were killed in the jeep and those suspected of involvement in the crime - they are all residents of the Xinjiang Uygur Autonomous Region. This is the largest territorial administrative unit of China - 1,7 million km ². The old name of the province is East Turkestan. Over the past years, XUAR has been the most troubled region of China with Tibet. The indigenous people of this province are the Uighurs, who profess Islam. The Uigurs still make up about half of the population of the province, although the policy of "Chinaization" of the region led to the loss of their status as an ethnic majority. In addition, the Uighurs compactly live in the south-west (in the prefectures of Kashgar, Khotan, Kyzylsu-Kyrgyz Autonomous Region and Aksu), where there are about 80%. Han (Chinese) mostly live in the east and in the center of XUAR.

From the history of the region

In the 18th century, the Qing Empire began the conquest of the eastern part of Uiguria. The whole century has become for this region a period of ordeals, occupation, internecine conflicts and uprisings. The troops of the Qing Empire (the Manchu dynasty) actually carried out the genocide and a significant part of the Oirat (Djungar) population was destroyed or fled. The Manchus occupied Dzungaria and East Turkestan, and in 1760, they combined them into a special military administrative unit, the imperial governorship of Xinjiang. Uigurs in the period of the XVIII — XX centuries. made about 400 uprisings. From time to time, the rebels managed to create their own state formations. A major uprising took place in Kumul in 1912 — 1913. The next major uprising in Kumul broke out in 1931. In 1933, the creation of the East Turkestan Islamic Republic was proclaimed. With the support of Moscow, which did not want to create an Islamic state near by itself and the possible penetration of Japan into this region, the East-Turkestan Republic was abolished.

In the 1937 year, the Uighurs rebelled again. The leading force of the uprising was the 6-I Uighur division. Sino-Soviet troops defeated the rebels. During this period, the Celestial Empire went through difficult times and was highly decentralized. The Chinese provinces were led by generals, often subordinate to Beijing only formally. In Xinjiang, General Sheng Shitsai ruled. He has established good contacts with Moscow. Xinjiang even had its own currency with him, and what is interesting, its stability was ensured by the Soviet Gosbank. The USSR had not only geopolitical interests in the region, but also economic ones: by this time large reserves of natural resources (uranium, tungsten, antimony, tin, nickel, tantalum, etc.) were discovered in Xinjiang.

However, with the outbreak of World War II, Governor Sheng Shicai changed his political orientation. It was commonplace for Chinese officials. He went over to the side of the Kuomintang - the Chinese nationalists. Then Moscow decided to support the national liberation movement of the peoples of Eastern Turkestan. In 1941, the uprising was raised by the Kazakhs. Sheng Shitsai again tried to “repaint”, wrote a penitential letter to Stalin, asked to accept Xinjiang as the 18 republic into the Soviet Union (the 16 republic in 1940-1956 was the Karelo-Finnish SSR, the 17 republic was unofficially considered Mongolia ). But he refused. In the meantime, the uprising was gaining momentum.

With the assistance of Soviet intelligence, Azat Tashkilat Freedom Organization of Eastern Turkestan was established in 1943. In 1944, the underground Military Revolutionary Committee, which had its headquarters in the city of Gulja, announced the beginning of an armed uprising. By order of Beria in December 1944, the Department of Special Tasks of the NKVD of the USSR was formed. He was to lead and support the national liberation movement of Muslims of Xinjiang. From local residents formed a group that has passed special training. She was abandoned in Xinjiang. A special group of the NKVD quickly formed guerrilla units. The guerrillas for several days captured all the strategic points of the Ili region. The Chinese garrisons were destroyed and scattered. The Chinese forces that came to the rescue from Urumqi were defeated.

The East Turkestan Republic had all the possibilities, taking into account the Soviet possibilities, to free all remaining Uiguria districts from the Chinese. But that did not happen. Moscow did not have aggressive plans. And, when representatives of the CPC seized power in China, the fate of the VTR was sealed. Mao Zedong called the revolution in the three districts of Xinjiang part of the Chinese revolution and invited delegates from the VTR to Beijing. The delegation along the way mysteriously died. According to the official version, during the flight through Gobi, the plane crashed and crashed, all passengers and crew died. A new delegation agreed to the entry of the East Turkestan Republic into the PRC. In 1955, the Xinjiang Uygur Autonomous Region was formed as part of the PRC. The Politburo of the CPC Central Committee begins the process of mass resettlement of the Han population to the XUAR.

Despite the serious changes that have occurred in the XUAR over the past decades — the growth of the population’s well-being, a serious change in the region’s ethnic picture — the province remains the most volatile region of China. Many Uighurs do not consider Xinjiang's entry into the PRC as legitimate and support the struggle for the independence of East Turkestan. Conflict between the indigenous population and the Chinese still occurs in the region. Uighurs accuse the authorities of assimilation. The Chinese authorities accuse the Uigurs of separatism and undermining public security. The idea of ​​radical Islam spread among the population. According to Chinese media, only in August 2013 of the year during the anti-terrorist operation in XUAR militants killed 22, more 100 arrested on charges of "spreading the ideas of jihad." In September, 2013 was sentenced in China to the death of three Islamists. Young people have created a "circle of Islamist interests." It all began decently - with reading books of religious content and watching movies, propaganda among peers. It ended sadly - Uighurs armed with knives attacked the police station, the administrative building and the construction site. 24 people were killed, including two policemen and 10 attackers, more than 20 people were injured.

Activation of the terrorist underground in China suggests that China, like Russia, is under attack by the Islamists. Islamic radicals view XUAR as a very important part of the caliphate. The technologies are the same as in Russia: Islamist literature is being abandoned, young people from Xinjiang are going to study in foreign Islamic centers, specialized Internet resources are being created, and there is an active ideological pumping through the “global web”. Young Muslims are trained in camps in the Afghan-Pakistani zone, receive combat experience in Syria. Survivors of the battles are being transferred to China; they have experience in conducting clandestine combat and the manufacture of improvised explosive devices. Thus, China is involved in confrontation with the "Islamic project".

Ctrl Enter
Noticed oshЫbku Highlight text and press. Ctrl + Enter
We are
In Donetsk, laid the Alley of national unityStrangulation: the context, conduct and consequences of the American naval blockade of China
91 comment
Information
Dear reader, to leave comments on the publication, you must to register.