Source: Ka-52 could fall in Moscow due to a defect in the rotor 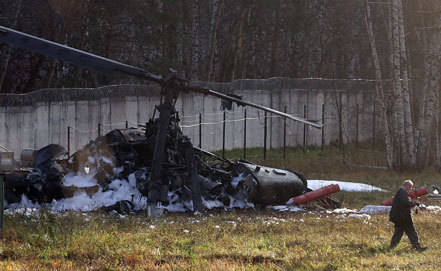 The cause of the spontaneous rotation of the Ka-52 military helicopter and its fall in the Moscow Zhulebino 29 of October could be the destruction of parts in the rotor control system, an informed source said on Tuesday.


According to him, it has already been established that one of the rockers of the upper rotor control system has collapsed, Interfax reports. Meanwhile, in the Moscow Interregional Investigation Department of Transport of the RF IC, they warned against early allegations about the causes of the crash of the Ka-52.

“The investigation of the incident is not yet completed, therefore, it is premature to talk about any reasons for what happened,” a source told RIA “News».

Note that the black box entries were decrypted on October 31.

The Ka-52 helicopter fell and caught fire on October 29 on 15.40 on Privolnaya Street in the Moscow region of Zhulebino. The fire that broke out due to the explosion of the fuel tanks was quickly extinguished. Two pilots were injured who took the helicopter from the houses. One of them was able to leave the car on his own, and the other was helped by emergency services.

Two versions of the accident are considered: equipment failure and piloting error. Meanwhile, the honored pilot of Russia Vadim Bazykin said that the cause of the fall of the Ka-52 could be the failure of the rotor column.

Ka-52 - Russian attack helicopter. The machine can hit armored and unarmored vehicles, manpower and aerial targets on the battlefield. It represents a further development of the Ka-50 “Black Shark” model.