November 5 2013
55
As is known, according to the results of the presidential race in Georgia, the representative of the ruling party “Georgian Dream - Democratic Georgia” Georgi Margvelashvili celebrated the victory. Immediately after the announcement of the final results of the presidential elections in Georgia (Margvelashvili scored 62,11% (1 million 12 thousand) votes), current Prime Minister Bidzina Ivanishvili announced that he had finally decided to leave the post of Prime Minister. Ivanishvili announced this decision a few months before the presidential election, stating that if a representative of his party won the vote, he would offer the country a new prime minister instead of himself.


It became known that a new prime minister will appear in Georgia after 17 in November of this year. It is on this day that the inauguration of the president is scheduled. That is, on the same day, the political elite of the Georgian state will change completely and will constitute a single team from one political party.

At the moment, the main contender for the post of Prime Minister of Georgia is Irakli Garibashvili - the current Minister of Internal Affairs of Georgia. 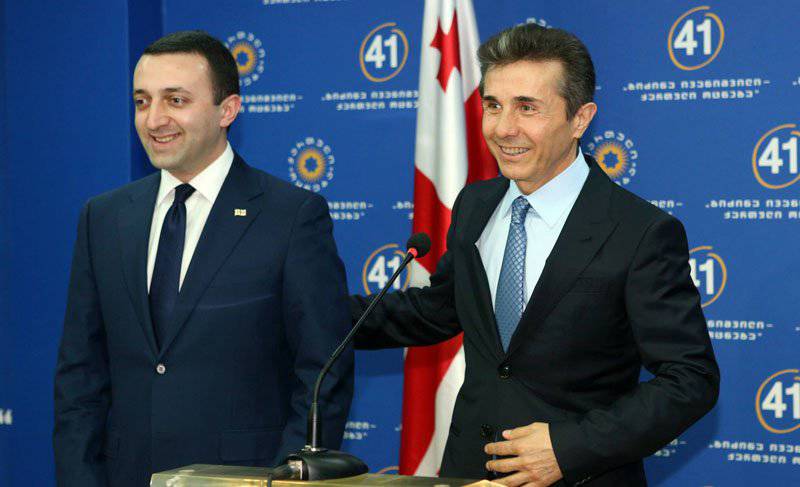 In the photo: Irakli Garibashvili and Bidzina Ivanishvili

If his candidacy is supported by the Georgian parliament, then Garibashvili will become the youngest prime minister on the planet. He was born 28 June 1982, that is, Garibashvili 31 year. Recently, such a young man became at the helm of the state only in the DPRK (at the time of the transfer of power to Kim Jong Un, he was about 30 years old).

As soon as there was information in Georgia that a young politician could become head of the Cabinet, in the country news caused an extremely unequivocal reaction. Someone just applauded such news, someone spoke in critical terms: they say why, for the president, the constitution introduces an age requirement from 35 years, but not for the prime minister. Most of all, critics against Irakli Garibashvili expressed that it was predicted that representatives of the United National Movement party, whose leader is Mikhail Saakashvili. According to party members of Mr. Saakashvili, 31-year-old young prime minister will not be able to independently carry out policy, and therefore will only become a performer of the ideas of Bidzina Ivanishvili. From the point of view of common sense, such a judgment seems to be unfounded. But his thoroughness dims somewhat after analyzing information about the UNM itself, from the lips of which it came. The fact is that when Saakashvili came to power in Georgia at the end of 2003 - the beginning of 2004, he was barely 36 years old at that time. And the Ministry of Justice of Saakashvili headed so generally in October 2000, when he was only 32, (not much more than Garibashvili today). That is, if, according to representatives of the United National Movement party, the young Garibashvili will necessarily be “someone to steer”, then it turns out that they themselves disclose the fact that Mikhail Saakashvili also ruled… We ourselves knew about this, but now the information is, as they say, from the original source ...

Let us return, however, to Irakli Garibashvili. His official biography is as follows.

Garibashvili, as already noted, was born in June 1982 of the year. Place of birth - Georgian SSR, Sighnagi place. In 1999, he graduated from high school in Dedoplistskaro (previous city name - Tsiteli-Tskaro). In the same year, Irakli became a student at Tbilisi State University, enrolling in the faculty of international relations and international law. In 2002, Garibashvili was sent to France to receive a master's degree at the University of Sorbonne.
Here he studied before the 2005 year at the Faculty of Political Sciences with a degree in international relations.
It is noteworthy that at the age of 19 the student Gribashvili got into the committee on foreign state relations as an intern. In the 2004 year (at the time of study at the Sorbonne), Garibashvili received a very impressive position as a purchasing and logistics manager in the Ministry of Foreign Affairs of Georgia. At this time, his business opportunities are becoming especially apparent.

In 2005, after graduating from a French university, Irakli Garibashvili became deputy director of the logistics department at the Georgian Foreign Ministry.

In August 2006, the future (possible) Prime Minister of Georgia was appointed for consular work in the state of San Marino.

In 2007, Garibashvili became a member of the Supervisory Board of Cartu Bank OJSC, which specializes in credit policy for various business areas. Cartu Bank is a financial institution owned by Bidzina Ivanishvili. It is from this moment that Ivanishvili and Garibashvili begin close cooperation, and after a while the young Garibashvili becomes one of the members of the “Georgian Dream” party, which wins the parliamentary elections of 2012 of the year.

A rather long conversation between Garibashvili and Ivanishvili clearly indicates that Garibashvili is a team man. Which team? Naturally, the team acting premiere. Based on this, it can be assumed which vector of political and economic work Garibashvili would prefer if his candidacy is supported by Georgian parliamentarians. A vector is pragmatism and, let's say, accurate building up of relations with partners (well, or with “partners”). For obvious reasons, the new prime minister will not abandon European integration and rapprochement with the atlantists, but at the same time Garibashvili will not engage in wiping his legs about relations with Russia.

Judging by numerous publications on the Internet in connection with Garibashvili’s candidacy for the head of government, Georgian citizens themselves are more concerned about this question: will Saakashvili retire after starting his ascension to the premiership as a young politician? If it starts, it will delight the majority of the Georgian population, but at the same time it may somewhat spoil Georgia’s relations with the West. On the other hand, if Saakashvili is really “merged” by Western “partners,” then he may well be in the dock. But this is a great chance to establish more constructive relations in the broad format Georgia-West-Russia. The fact is that the prosecution of Saakashvili as an obvious state criminal is expected not only in Georgia, but also in Russia.

Heraclius was able to prove during his leadership of the ministry that he would be worthy as the prime minister. He was able to create a police of the European type in the country, and this was the result of his daily work. I am confident that with his arrival our state will have a European effective government.

Garibashvili himself said that if he finds himself at the head of government, the cabinet will undergo minimal changes.

Georgian citizens, regarding the possible appointment of Garibashvili as prime minister, say this: it doesn’t matter what age or surname the new Prime Minister will have. We may not even know this name at all, the main thing is that there should be peace in Georgia, good relations with friends, and in our wallets there is money for a decent life.

Ctrl Enter
Noticed a mistake Highlight text and press. Ctrl + Enter
We are
Ivanishvili told the terrible truth about Russia, or Two of the Georgian casket ...Saakashvili leaked, or Bog for Bidziny
55 comments
Information
Dear reader, to leave comments on the publication, you must to register.