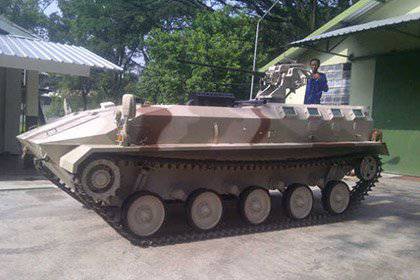 Medium tank on a tracked platform received the name SBS. Currently, as Rudiyanti explained, only the prototype of the combat vehicle is ready, which, after revision, will be sent for certification to the Ministry of Defense of the country.

The representative of PT Pindad did not report anything about the armament of the SBS, but in the published photograph a machine gun was mounted on the tank hull. The layout itself resembles the Anoa wheeled infantry fighting vehicles, also produced by the company. The publication also noted the similarities between the SBS and the German BMP Marder - 50 such machines Jakarta had previously planned to buy in Germany.

In the spring of 2013 year and it became known that Indonesia, together with Turkey, began to develop new armored vehicles. Subsequently, it was reported that we are talking about the creation of medium tanks, but officially the details of the project were not disclosed.

Russia also announced its readiness to help Indonesia develop tanks in 2012. Then the representatives of Rosoboronexport told that they could contribute to the creation of a light tank platform.

Ctrl Enter
Noticed oshЫbku Highlight text and press. Ctrl + Enter
We are
The army of the archipelago: the defense industry of Indonesia is developing steadilyIndonesia expands Anoa wheeled family
37 comments
Information
Dear reader, to leave comments on the publication, you must to register.