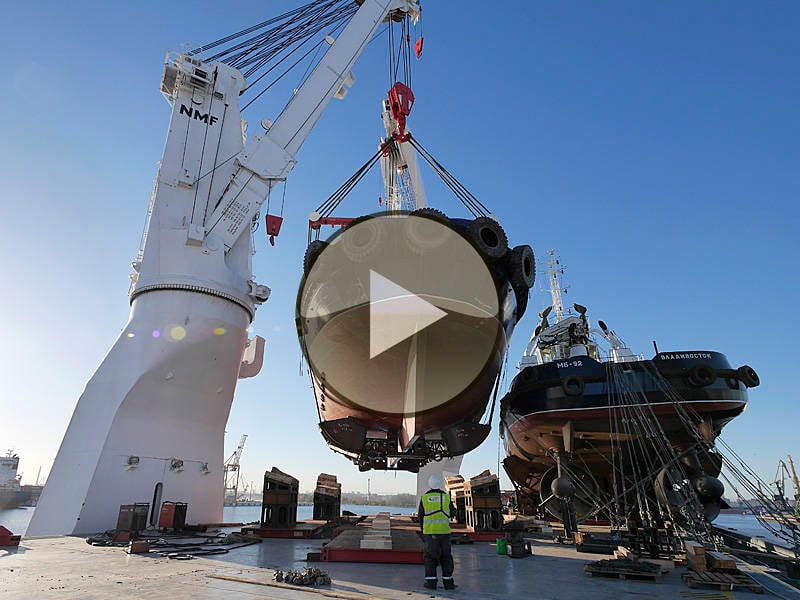 
24 October 2013 successfully completed the unique operation of loading six tugboats aboard the specialized vessel HHL Lagos of Hansa Heavy Lift (Germany), which will deliver them by the Northern Sea Route to Vladivostok. The loading lasted more than a week. The tugboat voyage will last approximately 30 days.

The total weight of the six tugs was 3000 tons. For the loading of tugboats from water, Pella produced special load handling devices, the divers were sharp underwater, and the tugs were mounted on the deck of the vessel using special metal structures (kilblocks), which took 200 tons of metal to produce.

The vessels are designed to perform towing and tipping operations in the port, on roads and coastal areas corresponding to the R2 navigation area (sailing in marine areas with a distance of no more than 100 miles from the place of refuge), conducting escort operations at speeds up to 10 knots, removing ships from aground and ships, fire extinguishing at floating facilities and onshore facilities, participation in OSR operations, cargo transportation, ice breaking, as well as for participation in rescue and special operations.

Technical parameters of the project PE-65

Ctrl Enter
Noticed oshЫbku Highlight text and press. Ctrl + Enter
We are
Plant "Pella" through the eyes of the photographer Oleg KuleshovCountry 404. About the Navy, marines, glory in general and Peremog in particular
Military Reviewin Yandex News
Military Reviewin Google News
52 comments
Information
Dear reader, to leave comments on the publication, you must sign in.