Patriarch Kirill: You can not continue to ignore the majority of Russian 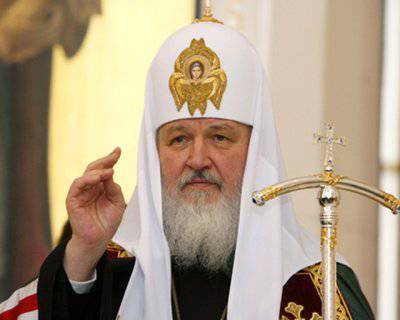 Ignoring the interests of the Russian people, ousting the Russian question from the public sphere led to skyrocketing marginalized and aggressive displays, said the Patriarch of Moscow and All Russia Kirill at the XVII World Russian People's Council.


“In a sense, Russia is a synonym for Russia. Today we have a different geopolitical reality, when in the vastness of this historical Independent states arose in Russia, many of which are also heirs to this historical Russia. Therefore, when I talk about Russia, I always mean this great civilization space, ”the patriarch explained.

In his speech, published on the official website of the Moscow Patriarchate, he stressed that Russia can offer the world the experience of building fair and peaceful interethnic relations, since "there were no peoples-masters and slaves-peoples in Russia".

In his opinion, in the modern world, the “model of the organization of society” prevails, based on “a system of permanent confrontation, competition and struggle, supposedly inevitable and necessary for progress”.

“Our ideal, on the contrary, is a solidarity society, a society of social symphony,” Kirill said, adding that people of different opinions and beliefs do not always understand social values ​​in the same way.

“There are nuances and nuances, there is a space for discussion, for dialogue. However, no dialogue with those who rudely humiliates, mocks, tramples, who destroys interethnic and interreligious world is impossible, ”he said.

“Very often, those who deny our shrines and values, transfer their feelings to the Russian people, who are the main creator of our civilization, the bearer of its ideals. It’s as if these forces are trying to support everything that can weaken, divide, worldview and moral disorientation, ”the patriarch said.

“It seems that these circles fear the real rebirth of Russian civilization, rebirth based on faith, connected to life, with a socially significant action, above all,” he said.

According to him, “the dialogue of peoples will not reach the goal without the presence of Russian voices, the Russian factor”, the World Russian Council can “represent the Russian people at the sites of interethnic discussions”.

Commenting on the events in Biryulyovo, the patriarch said: “The deafness of those in power to the demands of the people, the reluctance to look for joint solutions to the problems of excessive migration and related crime, as well as the sometimes defiant behavior of visitors now bring the situation to the brink of a critical line.”

“If the position of the Russian majority will continue to be ignored, only the destroyers of Russia will win,” he said.

“We reject the position of those who believe that Russia should be a country only and exclusively for Russians. But we will also never agree with those who want to see it “Russia without Russians”, deprived of a national and religious person who has lost a sense of solidarity and unity, ”he explained, stressing that“ no one person belonging to another people in Russia should not be limited in their rights, in their capabilities. "

Attention to the topic of international relations increased after the assassination of the resonance 25-year Yegor Shcherbakov in the metropolitan area of ​​West Biryulevo.

Then the residents of the region organized a “people's gathering”, but the action turned into riots, during which people broke windows, turned over cars, and also broke into the territory of the local vegetable base where migrants work and where, in their opinion, a criminal could be hiding.

Ctrl Enter
Noticed oshЫbku Highlight text and press. Ctrl + Enter
We are
Patriarch Kirill: All-Orthodox Council will call for peace
135 comments
Information
Dear reader, to leave comments on the publication, you must to register.