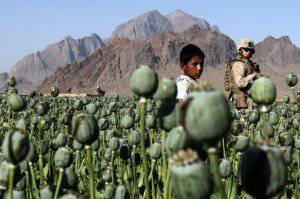 The withdrawal of American troops from Afghanistan is gaining real traits. On these days, the Pentagon began redeploying its forces from the Manas transit center in Kyrgyzstan, which by July 2014 will be transferred to the local authorities. By the same date, most of the International Security Assistance Force (ISAF) will leave Afghanistan, leaving the country in a state of civil war, economic backwardness, and the absence of the slightest signs of civil society.


This is the sum total of the 12-year stay of foreign forces, and further prospects look even gloomier. Now the world is dominated by a fairly consolidated forecast that Afghanistan may again become a springboard of international terrorism, from which a terrorist threat will emanate not only to neighboring countries. It is known that the financial basis of the activities of terrorists is provided by the drug trade, in the production of which Afghanistan is now in the first place in the world.
In this context, a reasonable question arises for American politicians and strategists: how did the US intend to achieve victory in Afghanistan without a decisive fight against Afghan drugs?

It is no secret to anyone that in the 12 years of being in Afghanistan the ISAF troops have produced and exported more heroin than any other country in the world. The Americans set foot on Afghan soil at the time when the country produced the smallest amount of opium raw materials from 2001 year, 1992 tons in total, for which less than 185 thousand hectares were planted. During the years of foreign invasion, drug production has increased almost 8 times, reaching an unprecedented scale. ISAF brought the controlled country into the sole leader among drug dealers of the entire planet, 40% of the total world crop of opium poppy is removed in Afghanistan. The revenues of the Afghan drug barons exceed 80 billion dollars a year, 3-10% of Afghanistan’s GDP. For comparison, we note that in Colombia, cocaine production at its peak was only about 15 percent of the national economy. Now, the area under opium poppy in Afghanistan exceeds the area of ​​coca plantations in Colombia, Peru and Bolivia combined. Today, according to the Federal Drug Control Service of Russia, up to 3 thousand tons of opium are illegally stored in the IRA.

According to expert estimates, about a fifth of the drugs produced in Afghanistan transit the “northern route” through Central Asia to the “black markets” of Russia, whose residents use 70 tons of heroin a year, and the number of its consumers reached 1,6-1,8 million. or 1,3% of the population. Every year, up to 100 thousands of people die from drugs in Russia. Special attention should be paid to this tragic figure, the white death from Afghanistan takes Russia seven times more lives than the Soviet Union lost in almost 10 years of war with the Afghan Mujahideen. According to the USSR Ministry of Defense, the loss of personnel of a limited contingent of Soviet troops in the Republic of Afghanistan amounted to 13 833 people killed and 49 985 wounded. Russia's question for the United States — why the Americans refuse to stop the deadly industry in occupied Afghanistan — remains without Washington’s official response. The answer can be found in the works of American experts and political scientists, for whom there is no doubt that the organized flow of drugs to Russia is part of the secret CIA operation that began in Soviet times.

In 1995, the head of the CIA’s operations in Afghanistan, Charles Kogan, acknowledged that at one time the CIA “sacrificed” the war against drugs to achieve victory in the Cold War, turning the Afghan-Pakistan border area into the largest heroin-producing region in the world. Professor stories University of Wisconsin Alfred McCoy also writes that US officials refused to investigate drug trafficking allegations because US policy on drugs in Afghanistan was subordinated to the interests of war against Soviet influence. In this regard, we note that with the arrival of Soviet troops on Afghan lands, the opponents of Kabul did not have a financial interest in tremendously expanding the cultivation of opium poppy. Over the years, the amount of assistance to the Afghan mujahideen by the United States by various sources is estimated at 5-6 billion dollars. The CIA then came to Afghanistan to support opium producers. Until now, the CIA’s involvement and responsibility for the unprecedented drug business in Afghanistan remains a closed topic in the White House, although the US military, who are fighting in this country now, will not deny that the lion’s share of opiates is still in the Afghan provinces, bordering Pakistan and controlled by US troops.

And this is not by chance, since the Americans who take part in the hostilities in these territories of Afghanistan do not seek to defeat the production of drugs from the opium group, primarily heroin. From the very beginning of the intervention, the Bush administration remained indifferent to the rapid growth of heroin production, because it did not create problems for the USA, the domestic American drug market for Afghan heroin remained inaccessible, they died in Central Asia, Russia, Western Europe, but not in the United States. And Americans are able to effectively deal with the plantations of plants for the production of drugs. Thus, in 2008, about 75% of coca plantings (229 thousand hectares) in Latin America were destroyed by the United States by spraying defoliants and mechanically, whereas in Afghanistan, a little more than 3% of opium poppy crops were destroyed in Afghanistan that year.

It is believed that military solutions to this problem are, at best, ineffective, and at worst counterproductive. The argument for supporting this position is the experience of the Taliban in 2001, when, as a result of the most severe measures, drug production in Afghanistan was reduced from 4600 tons to 185 tons. It is proposed to restore Afghan agriculture so that food crops become an alternative to opium, which is now often the only significant income of local peasants. An absolute majority of foreign observers, but not the Afghans themselves, will agree with this humane proposal. The fact is that, on average, one hectare of arable land can bring up to 70 kg of raw opium, which at the black market prices allows you to get about 8 thousand dollars, and selling wheat from the same area will bring only 800 dollars.

Alternative farming, it turns out, is unprofitable for the pro-American government of Afghanistan, which controls most of the trade in opium and heroin. The Afghan economy under Karzai remained a drug economy. The share of Taliban in the Afghan opium market does not exceed 5-10%. and is estimated to total from 200 to 400 million. With such a balance of power in the Afghan drug business, the military option to solve this problem is reasonable and can be quite effective, but only if there is a political will to cope with the discontent of the local population, more than three million peasants of Afghanistan are involved in the cultivation of opium poppy.

The Obama administration, it seems, on the eve of the withdrawal of its troops does not want to aggravate with the Afghan peasants, which means that in 2014, the world will witness new records of the Afghan opium economy. Reality can exceed these expectations. One of the registered candidates for the presidency of Afghanistan (April 2014) was Abdul Rasul Sayyaf, known not only as the irreconcilable leader of the Mujahideen of the Soviet era, but also as one of the first major Afghan drug traffickers. However, Afghanistan is not the only country corrupted by drugs, they profit from heroin production, and wherever these drugs are transported, distributed and consumed, they have their own corruption, about 80% of the profits from the drug trade come from consumer countries and make up the Afghan direction about xnumx billion.

Ctrl Enter
Noticed oshЫbku Highlight text and press. Ctrl + Enter
We are
What you didn't want to know about EnglandMilitary reform as an integral part of the security concept of the Russian Federation: Systematic dynamic assessment
22 comments
Information
Dear reader, to leave comments on the publication, you must to register.