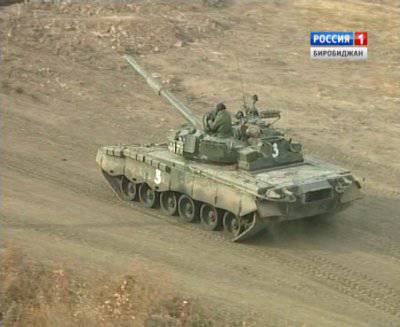 
Female tank the crew, along with the men, showed their skills in testing military units in the Jewish Autonomous Region. Excellent performance proved that the weaker sex can cope with heavy military equipment no worse than men. The verification program includes control exercises on military equipment and fire training. Including tank biathlon, which is gaining popularity, reports EAOmedia with reference to the Bira State Television and Radio Broadcasting Company.

At the entrance to the territory of the landfill of the car met a warning sign. Explosions were heard from afar.

The reason for the appearance of the commander of the Amur Combined-Arms Association is the active stage of the control check. Therefore, the new equipment of tankers aroused interest in Sergei Solomatin. Modern, fireproof kits recently massively began to arrive in parts.

Army reforms are gaining momentum. Representatives of the weaker sex are already preparing for service in the tank forces, despite the difficulties they will have to face.

In order for the tank to fire, the gun must first be charged, and it is not easy to charge it, the powder charge weighs six kg, and the shell itself weighs 25.

The commander did not dare to release the girls to the position of an independent, fully female crew. However, for the first time at the Bidzhany proving ground, a woman has become the commander of a tank.

“Shells are heavy to load, because they weigh a lot, and I liked it so much,” says tank commander Yulia Khvatova.

"I thought that, but there would not be all three hits, well, it turned out that way - emotions are overwhelming, I want to continue shooting," says gunner-operator Natalya Scherbyuk.

“There are a lot of impressions, because for the first time I participated in shooting, it’s noisy, but the headset was saved,” said the driver Svetlana Melnikova.

Tasks for girls commander changed. At the approach to the firing line, shooting, unlike male crews, was conducted from the spot. Time when performing tasks was not taken into account.

“Both the first and the second crew coped with the task better than the third crew, which is made by our defenders of the fatherland, are men. This is such a valuable gift for your crew,” said Sergei Solomatin, commander of the Amursky All-Arms Association.

Three hits out of three possible indicate that the girls cope with the combat vehicle is not worse than the male tank crews. Until the end of the year, in stages, several thousand servicemen will be tested for professional suitability. Commanders and their subordinates will take the exam in all units of the Eastern Military District from Kamchatka to Buryatia.

Earlier, EAOmedia IA reported that participants in the celebration of Victory Day in Birobidzhan were able to taste real soldier porridge today. For the preparation of military delicacies in one of the military units of the Birobidzhan garrison, entrepreneurs identified a bag of buckwheat and a stew box, as well as sets of disposable utensils.

Ctrl Enter
Noticed oshЫbku Highlight text and press. Ctrl + Enter
We are
President of the Federation of Tank Biathlon A.N. Stolyarov: “The creators of World of Tanks are going the right way”T-72B3 was declassified at the tank biathlon in Alabino
228 comments
Information
Dear reader, to leave comments on the publication, you must to register.