October 26 2013
163
On Thursday, heads and other representatives of the Commonwealth countries began to gather in Minsk. The first according to plan was to have a meeting of the Supreme Eurasian Economic Council. The participants in such a meeting were the heads of states of the Customs Union - the presidents of Belarus, Kazakhstan and Russia, as well as representatives of Armenia, Kyrgyzstan and Tajikistan, who are preparing to join and discuss the so-called road map of the CU (by the way, President Atambayev did not fly to Minsk , and instead of him, the deputy prime minister participated in the meeting, which, apparently, is connected with the provision of political asylum at the time to the ex-president of Kyrgyzstan Bakiyev). In addition to the politicians listed above, a man arrived at the meeting, who was on the council, which is no secret, the head of Ukraine was especially waiting. 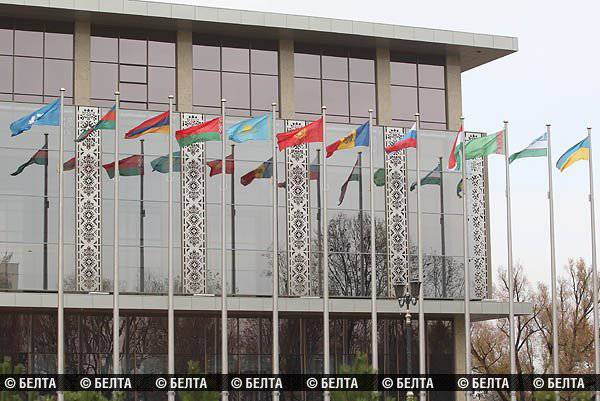 It was the presence at the meeting of Viktor Yanukovych as president of the observer country under the Customs Union that brought the main intrigue to the process. As you know, the Ukrainian authorities have recently begun to actively talk about choosing a European path of development, which was reflected in the readiness to associate with the European Union. But at the same time, both the Ukrainian President and the Ukrainian Prime Minister have repeatedly stated and continue to state that the signing of an association agreement with the European Union and the signing of an agreement on a free trade zone (FTA) with the EU cannot influence Ukraine’s desire to participate in Eastern integration that is, to have the opportunity to conduct the previous trade and economic, let's say, relations with the countries of the Customs Union. In Russia, such a position of the Ukrainian leadership is called an attempt to simultaneously sit on two chairs, but in (on) Ukraine prefer other formulations. Imagine one of these formulations in the form of a quotation by the deputy from the “Party of Regions”, Anna Hermann:

Firstly, a wise politician always has a backup option. A wise politician always has, as a good pilot, several alternate aerodromes, at least two, so as not to be dependent on one aerodrome. Secondly, Yanukovych never refused good, partnership relations with Russia, and, despite our confident path to European integration, we will build and develop relations with Russia, moreover - we hope that Russia’s place in the future will also be in European space.
Having several alternate aerodromes is, of course, wonderful. Suddenly there is bad weather over one - the “wise politician-pilot” will ask for a “landing” on the other. Conveniently, you will not say anything ... But only with a spare aerodrome in the form of the Customs Union, official Kiev can hardly succeed.

The fact that Viktor Yanukovych’s “alternate airfield” will have insoluble problems after concluding an association agreement with the EU and Ukraine’s accession to the FTA, the Russian president said. Answering the question whether it is possible that Ukraine will reserve the right to join the CU after the European association, Putin replied:

At the same time, Putin immediately declared that Russia was not going to fix the barriers to Ukraine on the path of its European integration. According to him:

This is not our business.

He explained Vladimir Putin and why the doors to the CU for Ukraine will shut after its entry into the FTA with the European Union. The Russian president said that after the first step into the Free Trade Zone with the EU, Ukraine would have to open its markets for European goods and services by about 75% to the EU. In five years, this figure will reach almost 98%. At the same time, the document itself on the association and free trade zone of Europeans is drafted in such a way that Ukraine will need to switch to European technical regulations as quickly as possible. During the transition to these regulations, Ukraine will in fact be deprived of the opportunity to export most of its goods to the EU markets (until the technical regulations are changed), but for the goods of a European manufacturer, the Ukrainian market will be almost completely open - there are no regulations here either to Berlin, Paris or Brussels no need to change.
Now it is worth referring to the other words of the Ukrainian law-maker, Anna Herman, who spoke of "alternate aerodromes" and "wise politicians." Mrs. Herman notes that the European Union needs Ukraine, which will have good partnership with its eastern neighbors, and says bluntly:

Europe needs Ukraine as a good contactor between Moscow and Brussels.

"Contacter" in this case can be replaced with a more precise term - "transit". After all, if Ukraine enters the FTA with the European Union, and at the same time the Customs Union continues to trade with Ukraine largely on preferential (do not take gas prices, of course) conditions, then there will be a situation in which the markets of at least three countries (Russia, Belarus and Kazakhstan) will open without reasonable restrictions for European products. It is already a lot, but if there is also a preferential transit country-Ukraine, it will be possible to completely forget about our own production. Ukraine itself, plus Russia, plus Belarus, plus Kazakhstan will turn into banal sales markets, and with 80-90%, sales will be one-way.

In describing this situation, Vladimir Putin said that the European Union would give a screwdriver to the countries of the Customs Union. By screwdriver, as the president of Russia immediately explained, he understands the screwdriver assembly, like what the Ukrainian, Russian, Belarusian and other industries can become.

However, it should be noted that Ukraine today is not only an observer of the Customs Union, but also an actual member of the CIS. And in the CIS operates its own free trade zone. The treaty came into force last September. Ukraine has signed and ratified such an agreement, and, therefore, when entering the FTA with the EU, it becomes a member of two free trade zones with rules that are mutually exclusive. That is, the imposition of any prohibitive measures on interaction with the economy of Ukraine, looking for "spare airfields" from Moscow, Minsk and Astana can be considered illegal? However, the legal nuances of all these treaties say that there is nothing illegal here.
Firstly, the CIS FTA has a special protocol that allows a state to protect its markets in special cases (the case of Yanukovich’s “airfields” among such), and secondly, Ukraine, by signing and ratifying the FTA agreement with the CIS, which is surprising, legally not a member of the CIS ... The reason is that Kiev has not yet ratified the Charter of the Commonwealth. That is, Ukraine is in the CIS, perhaps, at the everyday level, and legal literalism claims that Ukraine is not a full member of the CIS ...

By the way, after Viktor Yanukovych appeared at the meeting together with Yuriy Boyko (Deputy Prime Minister for the Fuel and Energy Complex), rumors spread that the President of Ukraine alluded to possible conditions for a “peace” with the Customs Union and abandoning plans to enter FTA with the EU. We are talking about a possible revision of gas contracts, with lower prices for Russian gas. So far, these rumors and rumors have remained, and the position of Viktor Yanukovych is still correlated with the statements of Herman about the search for "alternate airfields".

During the meeting of the Supreme Eurasian Economic Council, the issues of expansion of the Customs Union were discussed. At the same time, Vladimir Putin told the audience that he was thinking about full-fledged economic integration with the CU, for example, India, whose prime minister had recently visited the Russian capital. And Nursultan Nazarbayev said that Turkey is looking at the CU, which has recently been looking at European Union with great skepticism. As far as the words about the possible entry into the CU of India and Turkey are close to objective reality, nothing but time can show. Of course, with the entry into the CU of these countries, the organization would have acquired a mighty scale, but how much the economy will replay the policy at such a scale is another question. The potential presence in one association of Turkey and Armenia is, if not an explosive mixture, then a situation that requires literally a jeweler setting for a productive wave.

After the meeting of the Supreme Eurasian Economic Council, the Minsk Summit of the CIS also opened. One of the topics discussed is the appeal of the Belarusian president to all the Commonwealth countries to speak in the international arena from a unified position. The idea is certainly remarkable, but how great it is, so utopian and sharp. Speech from a unified position of Tajikistan and Uzbekistan, Armenia and Azerbaijan - I want to believe in it ...

And the Belarusian leader invited Georgia to return to the CIS, but she answered coldly: they say, we said that we were marking the EU and NATO - we are not on the way with the CIS ... The CIS is only for us to sell Borjomi and Rkatsiteli - in the EU, they do not drink it ...

Other issues became much calmer (at least, calm due to discussion) at the CIS summit:
declaring next year the year of tourism in the CIS;
the announcement of the cultural capitals of the Commonwealth on 2014 (according to preliminary data, the Kyrgyz Osh and Kazakh Almaty will become such cities);
development of cooperation in the fight against crime (extremism, terrorism);
the creation of a council to counter corruption;
rewarding of those or other persons with certificates on behalf of the CIS.

Ctrl Enter
Noticed oshЫbku Highlight text and press. Ctrl + Enter
We are
Kyrgyzstan is ready to become the fourth member of the Customs Union: who will be in the black?Kyrgyzstan makes demands of Russia and the USA
163 comments
Information
Dear reader, to leave comments on the publication, you must to register.