Putin: strife on interethnic grounds must be prevented in advance 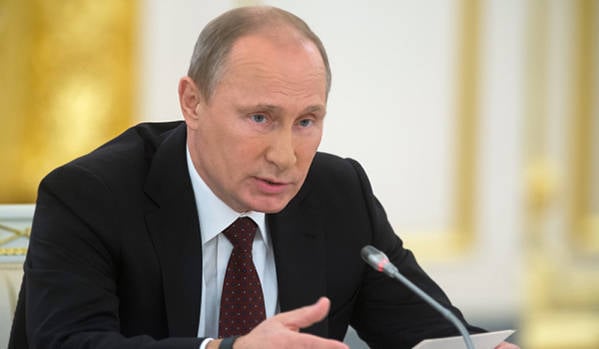 Inter-ethnic conflicts in the Russian Federation must be blocked in advance at the local level, President Vladimir Putin said at a meeting of the Council on Inter-Ethnic Relations. Its participants discussed the conflict in Biryulyov and elaborated on measures to strengthen interethnic harmony in Russia. The heads of the FMS, the Ministry of Regional Development and the Prosecutor General’s Office also spoke at the meeting.


"Contention on the basis of interethnic relations, as a rule, originates precisely on the ground. Where they need to be blocked in advance," said Putin, speaking at a meeting of the Council.

“Unfortunately, local leaders often prefer desk work, the benefits of which are either none or very little, especially if you don’t get through to the relevant leaders,” the president said.

"In Biryulyov, for example, you know, residents' dissatisfaction accumulated over the years. There were appeals to the police, the local government, and the district leadership. Why do we need power if it does not want to know the situation as it is in the regions, does not accept no measures and do not hear people ", - asked the President of the Russian Federation.

Work to strengthen interethnic harmony should be systematic

"One-off," firefighters ", measures to prevent ethnic conflicts are ineffective," said Vladimir Putin. According to him, we need modern system methods and approaches, which are reflected in the new Strategy of the state national policy.

"And it will begin to work in full force only when it is in demand in the regions. It will become a real guide to action, to painstaking, systematic work to strengthen interethnic harmony," Putin said.

Self-removal of authorities from responsibility for interethnic problems is unacceptable

“I emphasize once again: every territory, market, house is the responsibility of a specific person, a specific manager, owner of an enterprise or an official. And it’s unacceptable for anyone to withdraw from this responsibility,” the Russian president said.

According to him, such self-elimination leads to serious conflicts, including on ethnic and religious grounds, as well as to attempts to "resolve these conflicts by illegal methods."

“It is also unacceptable to condone illegal actions of immigrants who violate immigration laws and commit an offense,” Putin added.

On the night of October 10 in the Moscow area of ​​Biryulyovo, the West unknown killed a young man, after which he disappeared. Later, a citizen of Azerbaijan Orkhan Zeynalov was detained and arrested on suspicion of this crime. Residents of the 13 area of ​​October gathered to demand a speedy investigation into the murder, as well as the closure of the Pokrovsk vegetable base and the tightening of migration policies. However, the "people's gathering" escalated into unrest, following which almost 400 people were detained.

"Labor cards" may be entered in regions of the Russian Federation

“It may be worthwhile to think about drawing up so-called labor cards that determine the needs of the subjects of the Federation for additional labor,” suggested Vladimir Putin.

The President of the Russian Federation recalled that at present the issues of adaptation and integration of migrants are being addressed by the Federal Migration Service and the Ministry of Regional Development.

"But it must be admitted that there are still few positive changes here," he noted. "At the same time, I believe, we must work more actively in the field," the president said.

As for the social adaptation of migrants, then, according to Putin, for this you need to create the necessary conditions. "Such adaptation centers are organized in Tambov and Orenburg. And, according to experts, they can give a good result," said the president.

"The new socialization of Islam should be viewed as a development of the traditional Muslim way of life, thinking, attitudes in accordance with modern social reality. In contrast to the ideology of the radicals pushing believers in the Middle Ages," Vladimir Putin said later at a meeting with the mufties of Russia's spiritual administrations.

According to the head of state, new forms of work are also important here - through Muslim cultural centers, Islamic scientific and educational centers, youth and women's clubs.

“I am convinced that your great contribution to the social adaptation of people who come to live and work in Russia can be significant, many of them are your co-religionists,” Putin said.

"They should hear your voice, feel your participation. Otherwise, they become the object of propaganda of various fundamentalist structures," the president said.

Putin is confident that Islam is a bright element of the Russian cultural code.

“Islam is a bright element of the Russian cultural code,” Vladimir Putin stressed during a meeting with mufti in Ufa.

The President recalled the decree that 225 had established a Muslim religious office in Russia years ago. In his opinion, this “showed then to the whole world” an example of toleration and wisdom.

Ctrl Enter
Noticed oshЫbku Highlight text and press. Ctrl + Enter
We are
How can Russia survive and win in the 21st century?Examples of ethnic hatred in the former USSR
172 comments
Information
Dear reader, to leave comments on the publication, you must to register.