BMP Puma not adopted by the Bundeswehr

October 23 2013
60
German Defense Minister Thomas de Maiziere (Thomas de Maiziere) told 18 on October 2013 of the year in a report to the Bundestag that the promising Puma infantry fighting vehicle would not be adopted by the German army and would not start entering the troops in the middle of 2014, as previously planned. This is associated with significant shortcomings in the design of the Puma BMP, identified by the results of tests of an experimental batch of five cars. Thus, the main project in the field of ground weapons of the Bundeswehr of the last two decades was in a situation of complete uncertainty.


Among the main shortcomings of the Puma BMP, there were mentioned problems with the stability of the electronic systems, with software, technical documentation, as well as criticism of overweight and poor visibility for crew members. 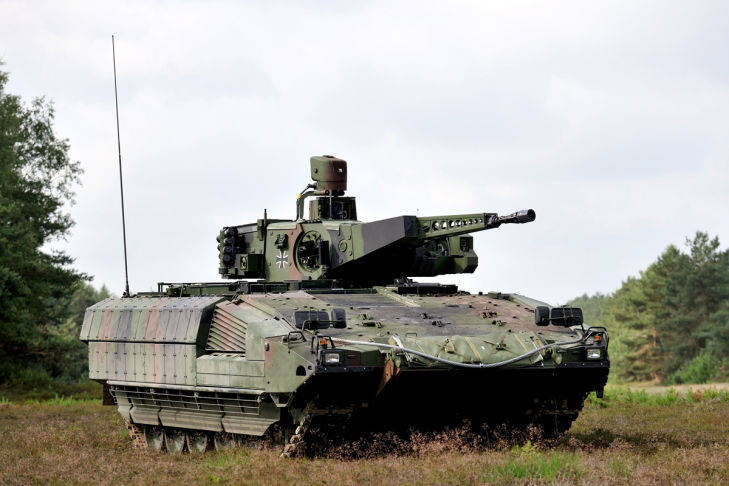 For a long time, representatives of the Bundeswehr criticized the technical deficiencies identified during the tests of five experienced infantry fighting vehicles, noting in particular the poor night vision system, problems of the fire control system and problems with the wireless data interface between the BMP and the prospective Gladius soldier equipment of the Bundeswehr (see For example, material).

A particular criticism of the military is caused by a poor review of the Puma BMP driver. The driver has three daily periscopic observation devices, and the central device can be replaced with a passive night vision device. The driver also has an image screen from the rear view camera. The commander has five periscope observation devices, and another periscope device has a gunner. Duplicated fire control system for commander and gunner.

The hull of the Puma BMP is made of welded steel armor with a set of additional modular armor installed in case of need in the field to improve ballistic protection. The weight of Puma in the basic version of the reservation (the so-called level A) is 31,45 t, and with a fully mounted set of additional protection (level C) the combat weight reaches 43 t. The last value is considered by a number of Bundeswehr experts to be excessive in terms of operational and tactical mobility cars, and in terms of load on the chassis.

Thomas de Maiziere was not able to answer whether these problems of the Puma BMP are related to the changes made by the military at the R & D stage in the originally approved tactical and technical tasks. On the question of when the new BMPs would go into service with the Bundeswehr, the minister said he did not know, adding that he was waiting for the end of the month for clarifications and proposals from the machine manufacturers, Krauss Maffei Wegmann (KMW) and Rheinmetall. Both of these companies are developing and manufacturing BMP Puma under the auspices of the consortium PSM (Project System und Management) GmbH, created by them for this consortium.

The German Ministry of Defense 6 July 2009 issued a contract KMW and Rheinmetall for the production of 405 serial BMP Puma for the Bundeswehr in the amount of about 3,1 billion euros. The total cost of the procurement program for these machines was estimated at 4,3 billion euros. In 2012, due to regular reductions in the armed forces of the Federal Republic of Germany, the order for Puma infantry fighting vehicles was reduced to 350 units.

Ctrl Enter
Noticed oshЫbku Highlight text and press. Ctrl + Enter
We are
World market and production of armored vehicles (part 1 of 3)Puma for the Bundeswehr
60 comments
Information
Dear reader, to leave comments on the publication, you must to register.