Moscow is under siege 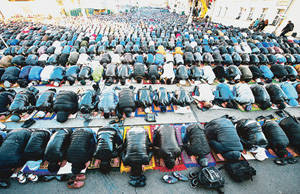 Practically in the frontline city, an ethnic bomb of the megaton class was already laid in peacetime.


For some reason, in the widest circles of the domestic public of the liberal spill, it is believed that there will not be a hundred wars in the coming years. And even if it breaks out, it is supposed to carry it out in democratic minds by some exceptionally humane methods and methods. In a word, only in strict compliance with all previously signed Geneva Conventions. In other words, a future war is sometimes assumed to be a clash between two noble knights. Meanwhile, the last armed confrontation of this kind is the Russian-Japanese war of 1904 – 1905. Further, the level of inhumanity, cruelty, violence and destruction from conflict to conflict only increased.

As is known, история Humanity is the story of wars. As the Reichswehr ideologue General von Sect used to say: “The eternal world is a dream, and not even a beautiful one. War is the link of the divine universe. ” Historians have calculated that for one peaceful year of human life there are eleven soldiers. And the longer the peaceful pause, the bigger and bloodier the war following it. In particular, in the history of Europe there was a period when the continent practically did not fight - from 1815 to 1914 a year (with the exception of the short and not too bloody and destructive Franco-Prussian war of 1870 – 1871). But since 1914, the soul was taken, as they say, in full. Blood poured just river. By the way, no one had previously been able to predict either the scale, the victims, or the destruction of the world war.

Therefore, to say in our time that there will be no war and that it will begin to have some kind of civilized look, we must be very careful.

And now we will discuss only one question.

Few people think that after 1991, Moscow has become a border (front-line) city. Some 300 kilometers separate it from the state border. In June 1941, the 56-th motorized corps of Erich von Manstein (Army Group North) covered a similar distance in just four days. Now, I suppose, they will manage for three.

Suppose the war has begun.

Naturally, a general (partial) mobilization will be announced. Healthy and law-abiding men of the city of Moscow will be put under the gun and will depart as part of the formations, units and marching units at the places of operational mission.

It must be assumed that he will be called up to the Armed Forces (to the internal troops) and a significant part of the Moscow police. Someone must make up parts and formations for the protection of the rear of the acting army and "hold" the front-line regime. In other words, men from the front-line city will go to the front. How else?

Then the question arises: who will remain in the capital of our Motherland? The answer, apparently, is that - there will be old people, women and children. And several million "non-residents", non-citizens of the Russian Federation.

Among them are currently migrant workers - residents of Central Asian and Transcaucasian republics. And if already in peacetime a significant part of them are engaged in theft, robbery, violence and murder against the indigenous population, then what will happen in wartime? Has anyone thought about this? Who will the Moscow women and children?

Say, if the October 19 1941 in Moscow was declared a state of siege, the demographic situation in the city was completely different. First, the population was in its vast mass law-abiding, and secondly, who was to ensure the state of siege. And despite some rough edges, the situation as a whole in Moscow was kept under control. Only one fact is enough - there were no acts of terrorism and speeches of the fifth column.

What will happen now?

If someone forgot, not so long ago, a representative of a Transcaucasian ethnic group died in Moscow as a result of a criminal showdown. His fellow countrymen literally organized themselves into a huge crowd of many thousands in a few minutes, which, having paralyzed the movement on Komsomolsky Avenue of the capital, moved towards the city hall. The riot police arrived in alarm, without any ceremony (noble, however, it was then wet), dispersed the crowd of Caucasians.

And what will happen in wartime? It is terrible to even imagine like that. Or nobody ever thought about it? It seems that, as usual, we live according to the famous Chernomyrdin formula: “We have never had such a thing - and suddenly, look, again!”.

It should be added that races and religions usually fight. In any case, it has been so for the last five thousand years. Usually many of our politicians forget about it. It seems that it was about them that Niccolò Machiavelli said in his work “Discourses on the first decade of Titus Libya”: “... it is from this that very many people who read historical works with interest perceive the diversity of incidents described in them, but never think about imitating them , believing that such an imitation of a matter is not only difficult, but impossible at all, as if the sky, the sun, the elements, people have changed their movement, order and force since the times of antiquity. ”

It is quite possible that a future war will break out in full accordance with the postulates of Samuel Huntington, set forth in his famous book “The Clash of Civilizations”. The sky, the sun, the elements, people have not changed their movement, order and force since antiquity. Inter-civilizational conflict will break out, and in the capital of our Motherland a multi-million fifth column has already been formed, rooted, embedded. God forgive me for the soldier’s language, but it can be so bombed that it will not seem like it.

Ctrl Enter
Noticed oshЫbku Highlight text and press. Ctrl + Enter
We are
About Stalin and KhrushchevOn the other side of the “red” and “white”. Izborsk Club Report
166 comments
Information
Dear reader, to leave comments on the publication, you must to register.