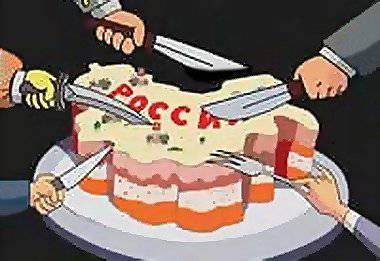 Radical-liberal opposition and unity of the country.


Radical liberals are becoming an increasingly peculiar social group. I wanted to write a “layer”, but - no, this community is far from layer to layer.

However, by virtue of being a part of considerable capital and (or) leading media channels, this group influences the mass consciousness and the general climate in the country.

Depending on the current situation, the “guard of liberalism” changes the “assemblage point” and the direction of concentration of efforts. Now, when the “coordinating council of the opposition” is dismissed as unnecessary, the last page of the “swamp” anti-Putin movement has been turned over. Those who jumped on high-staged scenes, shouted obscene squares, voiced in editorial offices and studios, realized that as a public politician, they would never accept any contenders for legitimate power. However, having got used to the role of successful compradors, they do not intend to leave “this country” alone and express full readiness for “promotion” of the most destructive and dangerous ideas for the future existence of Russia.

After the failure of the neo-Bolshevik appeal to the “masses”, which was supposed to be promoted to the next promises of “freedom” and “democratic abundance”, a new method was chosen. If the centralist vertical could not be curtailed by a frontal collision, then it is necessary to go around. That is, working with the consciousness of regional elites, with specific phobias of rich, but “tired” regions, with games of separatist sentiment.
Appear, as it were, spontaneous and “idiot” initiatives and proposals. Such, for example, as a teacher from the State University Higher School of Economics, a candidate of any sciences, Sergey Medvedev. A young, but very competent specialist suggested suddenly transferring the Russian Arctic under international control. Because we ourselves, they say, only ruin the entire Arctic ecology.

Less than a few days later, as Evgenia Albats, leading Ekho Moskvy, one of the main liberal media, said she did not see anything terrible if Russia divided along the Ural ridge. Said in the context of a conversation about strengthening the influence of China in the CIS republics, as well as in the regions of the Russian Federation. In her opinion, our Siberia is now waiting for one fate - to become a vassal of China.

The statement stirred the sleepy pre-winter of the Duma politicians. One of them, Gennady Zyuganov, speaking at the plenum of the Communist Party of the Russian Federation, proposed a legislative initiative to criminalize those who support the division of the country. A deputy from the "United Russia" Sergei Ten warned that his party will make a speech according to Albats a series of relevant requests.

Thus, the publication of positions reached a certain limit, after which, as after a fork, two scenarios were possible. Either the liberal-radical-thinking citizens will come to their senses and, realizing how dubious the games are, they will take a step back. Or they will continue to bend their line, confirming not the emotional, but the strategic “choice of goal” - the unity of Russia.

Much clarified the comment of ex-TV presenter N. Svanidze. 1993 Democracy Singer (from tanks - in parliament), he hurried with a sharp attack on the initiative of the Communist Party leader. I did not fail to respond, despite the day off.

According to Svanidze, issues relating to the territorial integrity of Russia should be openly discussed at the public level, as required by the freedom of speech: “We need a public discussion, convince people that they are wrong. The CPRF is directly related to the regime that we had for 70 for years and silenced everyone. ”

So, a member of the Public Chamber unambiguously expressed the idea that on issues of territorial integrity, Russia "needs a public debate." It is difficult to understand how this can be reconciled with the presidential definition of permissible in a public debate.

To those who have forgotten, let us recall the words spoken by the head of state at the Valdai Forum last fall: “The sovereignty, independence, integrity of Russia are unconditional, these are the red lines that no one should enter.” But it is precisely the justice of these “red lines” that Svanidze calls into question.

And his young “colleague” Ksenia Sobchak, meanwhile, is tweaking over Twitter about the indignation of deputy Sergei Ten, who “dared” publicly to resent the Albats remark about dividing Russia along the Ural ridge.

We note that the “Russian nationalism” of Mr. Navalny, the unforgettable one of the slogans: “Stop feeding the Caucasus!” Has fallen perfectly in the “piggy bank” of provocations.

An impressive picture is obtained, is not it? They are already ready to separate “only” the Arctic, Siberia, the Far East and the Caucasus from Russia. And this, if you please, is just the beginning. The scenario proposed by the bargaining Frontier will be realized, they will start talking about Tatarstan, about the originality of the Tver principality, about some Nordland with its capital in St. Petersburg, about the Cossacks in the South.

Sadly, but the front, all the more clearly separatism making its fad, really stands up. It is not constrained in means and in access to the most mass and prestigious media platforms. In particular, to the already mentioned “Echo of Moscow”, whose budget is based on the funds of the owner - the holding company “Gazprom-Media”. Roughly speaking, the ideas about the “inadequacy” of the division of Russia spread through the sale of Russian gas, the “common property”. However, this source of income itself can exist only under the condition of the unity of the country.

The last doubts are that the public being described and the radio station used by it to the fullest began to stick the pipe on which they were sitting, the publication of the blog by K. Borovoy from 20 of this month dispelled. The blog is named simply: “The collapse of Russia is inevitable.”

A friend and associate of V. Novodvorskaya writes in her text: “The real federalization of the regions that began under Yeltsin, possibly the predecessor of the creation of a confederation in Russia, was stopped by Putin. The sprouts of economic and political independence of the regions (increasing their effectiveness in competition, the real increase in the authority of regional authorities) were crushed mercilessly. ” Interesting, yes?

Further: "The fate of the new colonial empire can not be different than the fate of the USSR - this is the law of the historical development of the world." More interesting?
But, nevertheless, here it is. That very thing, for the sake of which the opus was published under the name of Borovoy: “At some point, the regional authorities will have to lead the process of autonomization of the region. Or completely lose their own legitimacy. A simple arithmetic problem, which at some point will arise before every governor: to try to save the region and its citizens, refusing loyalty and tribute to Moscow, will be quickly and unequivocally solved by any governor. Or the next governor after his predecessor, quickly displaced by the hungry people. "

You, the reader, understand everything? The regional authorities "will have to" lead "the autonomy of the region", "save the region and its citizens, refusing loyalty and tribute to Moscow."

The specified text was not printed in a newspaper that was secretly distributed in the station toilet. It is posted on the website of the officially registered, successful and completely “handshaking” media. Readers are hundreds of thousands, if not millions of Russians.

Installation on the division of the country is clearly marked as never before. It is realized deliberately, as if even with a challenge, with some kind of provocation towards power. Behind this is seen a meaningful withdrawal of the “oppositionists” from a meaningful and peaceful dialogue with the state.
In this case, full, lordly, in many respects the privileged position of his rabid detractors, the farther, the more puzzling. After all, it is not too late to take measures so that the third, deadly part of the cynical utterance of old Brzezinski: “Against Russia, at the expense of Russia and on the ruins of Russia” would not be a reflection of the results of vital activity of the “liberal” group.

Ctrl Enter
Noticed oshЫbku Highlight text and press. Ctrl + Enter
We are
On the other side of the “red” and “white”. Izborsk Club ReportThe West without the USSR: the world goes to an ideological explosion
77 comments
Information
Dear reader, to leave comments on the publication, you must to register.