Russian army and special services are preparing for the Sochi Olympics

October 17 2013
15
Russian military and law enforcement agencies are stepping up efforts to ensure security at the upcoming Winter Olympics, which are due to start in Sochi on February 7 of the year. First in stories Russia's Winter Olympics will last from 7 to February 23. At these games, it is planned to play 98 award sets, which is immediately on 12 more than played at the Olympics in the Canadian Vancouver in 2010, which means that the game in Sochi will potentially attract more athletes and spectators. At the same time, the Olympic Games in Sochi promise to become the most expensive in history. The cost of building only Olympic facilities amounted to 214 billion rubles. And the total expenses for the Winter Olympics, taking into account the built infrastructure, amount to an astronomical sum of more than 1526 billion rubles or 37,5 billion euros.


Naturally, an event of such a level, which cost the Russian budget very dearly, should go without a hitch, without a hitch - and this is in a region that is not particularly distinguished by its stability. Here, you and the terrorist underworld and Georgia, which has never forgiven Russia for recognizing the independence of Abkhazia and South Ossetia, are still wondering whether the Georgian athletes will take part in the Olympics.

The grouping of law enforcement agencies in the Sochi area has already been strengthened at this point in time. At present, the Ministry of Internal Affairs of Russia is studying the successful experience of organizing and conducting the 2013 Universiade held in Kazan. During the sporting events in Kazan in the summer of 2013, an impressive group of Ministry of Internal Affairs from 24 of thousands of police and military personnel of the Russian Internal Forces was concentrated here. At the Sochi Olympics, providing peace and tranquility of athletes and spectators will be even more impressive contingent of security officials - up to 50 thousand people. 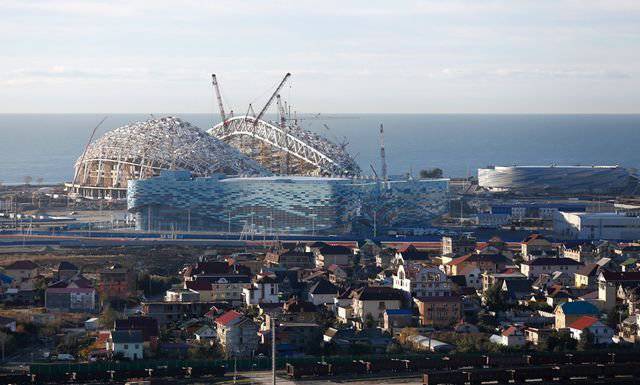 It is worth recalling that earlier the leader of the Chechen militants, Doku Umarov, who has not yet been caught, called on all his supporters to prevent the holding of the Winter Olympic Games. He also found his own rationale for this: “You cannot hold“ satanic dances ”on the bones of our ancestors, who died and were buried on the territory of our lands along the entire Black Sea coast. It should be noted that at one time at the Olympics in Seoul, all sewage manholes were specially welded in order to prevent the terrorists from getting out of them. And in the 2012 year, during the Summer Olympic Games in London, portable rocket launchers were installed on the roofs of many houses, which could knock down potential aircraft of terrorists. At the same time, the protests of some residents of the capital of England did not have any effect on the military. At the same time, both in Seoul and in London the games were calm and successful. It is necessary to assume that the Russian law enforcement agencies will try to take into account all the available experience in providing security at competitions of this level.

Earlier, the head of the FSB of Russia told reporters that in November 2013, it was planned to conduct large-scale training exercises at Olympic facilities, work out possible mechanisms of interaction between all subjects of the country's antiterrorist activities in practice and, if necessary, make appropriate adjustments to the security forces. The large-scale operational and strategic exercise "Olympiad-2014" will be held in Sochi in November of this year. According to the head of the FSB of Russia, the exercises will affect the 270 Olympic facilities.

According to Alexander Bortnikov, since 2012, 15 of diverse exercises have already been held in Sochi, while 7 of them are directly on the territory of Greater Sochi. The exercise tested the adequacy and readiness of the existing forces to respond quickly to emerging situations. The main goal of the upcoming November exercises in Sochi should be to work out the mechanism of interaction of all the subjects of Russia's anti-terrorism activities. According to Bortnikov, the training stages should be linked to the schedule for the introduction of Olympic facilities into the permanent operation mode. 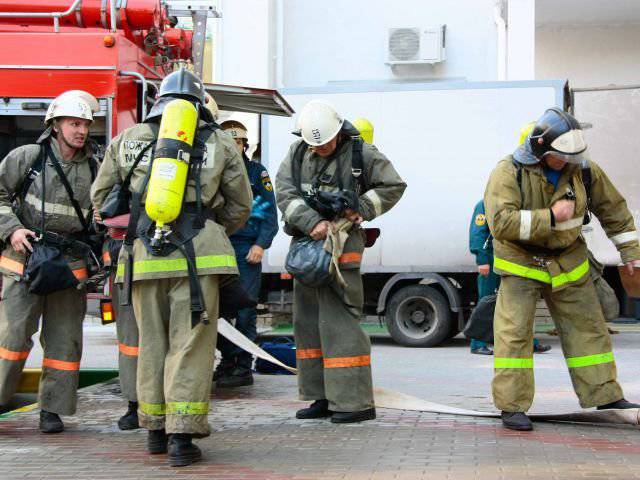 At present, the National Anti-Terrorism Committee (NAC) does not disclose the exact date of commencement of operational-strategic exercises, most likely, the suddenness factor will be used. Such exercises are held in Sochi with an enviable regularity, one of the last and most ambitious of them took place in September 2013 of the year, led by the exercises of the Deputy Prime Minister of the Russian Government Dmitry Kozak.

Today it was the largest exercise, which took place in the most realistic mode and summed up 18 with interdepartmental trainings, in which the Russian departments worked out possible response scenarios for various emergency situations. The September exercises demonstrated a high level of preparation of all organizations and services for the Winter Olympics-2014, and also identified areas that require more detailed study, Dmitry Kozak said. Not even the crescent passed, as the NAK started preparing new, even larger exercises, a source at the NAC noted that by November 2013, sufficient forces and resources would be concentrated in Sochi and its surroundings that are necessary to ensure the safety of the upcoming games.

On the one hand, the leaders of the interdepartmental operational headquarters (WSS) and the NAC speak about the ability to fend off all possible terrorist threats that may arise at the upcoming Olympics. On the other hand, their concern with the current situation is visible. This concern, for example, was first expressed by Lieutenant-General Yevgeny Ilyin, deputy head of the NAK apparatus, who spoke at the opening IV All-Russian scientific and practical conference on the topic “The Role of the Media and the Internet in Preventing Terrorism” on October 14. Ilyin believes that, “despite the decrease in the level of terrorist threats in Russia in recent years, it still remains quite high. Especially in the North Caucasus region, where more than 98% of similar crimes are being committed in our country at the moment. ” 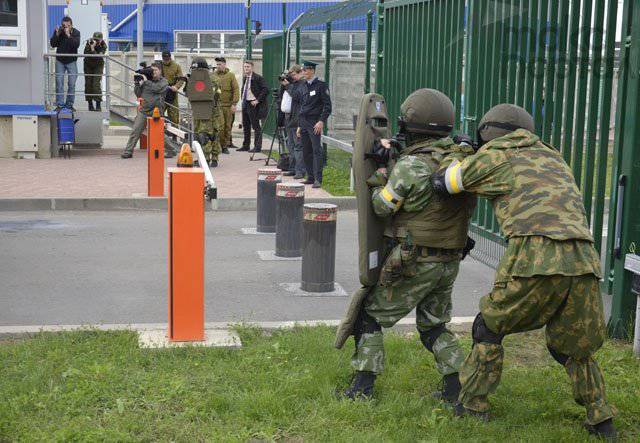 This region, as we all know well, directly borders the area where the Winter Olympic Games are held. This means that it is a potential target for terrorists, it can become a place of terrorist attacks, which are developed by the leaders of religious extremism, and often foreign ferments. It is no coincidence that, according to Alexander Bortnikov, the FSB today plans and in practice implements measures that are aimed at “updating the infrastructure of border crossings and checkpoints in the main areas of possible penetration of militants into the region, including from Syria and the Afghan-Pakistani zone”.

An analysis of the activities of the troops and law enforcement agencies in ensuring security during the Winter Olympics allows us to conclude that the MOS has built a defense system in Sochi and its environs, which includes representatives of all Russian law enforcement agencies - the FSB, the Ministry of Internal Affairs and, of course, the Russian Ministry of Defense. As the Minister of Defense of the country Sergey Shoigu stated recently, “an important role in ensuring the security of this sports forum lies with the Ministry of Defense. Black Sea forces will also be involved in holding security measures. fleet countries".

At the same time, in addition to the Russian Navy, according to Colonel-General of the Ground Forces of Russia, Colonel-General Vladimir Chirkin, the ground force grouping will also be actively used. “The country's ground forces have already prepared themselves not only to provide protection for sports facilities and structures, but also to help eliminate potential natural and man-made disasters, combat terrorism and eliminate other emergencies,” the commander-in-chief told reporters. According to Chirkin, the best units of the Ground Forces, who have repeatedly taken part in counterterrorist operations in the North Caucasus, and provided assistance to flood victims in the Far East this year, will ensure safety at the Winter Olympics. 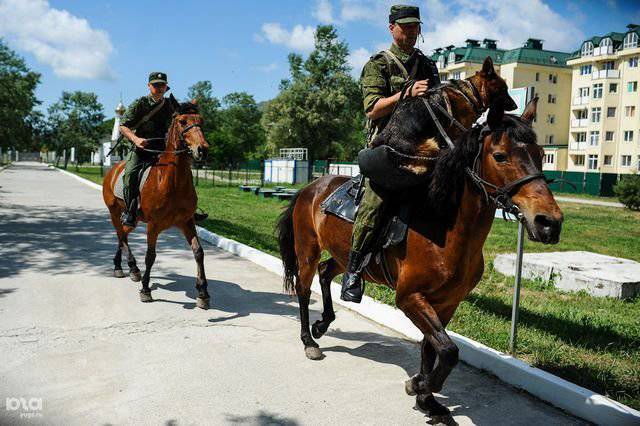 A special role in ensuring the safety of games is assigned to the Airborne Forces of Russia, who, according to the tasks assigned, at the 2014 Olympiad will closely cooperate with the Border Troops of the FSB of Russia. “We have a joint task with the FSB Border Forces at the battalion of the 247 th assault assault Cossack regiment of the 7 th Novorossiysk division. We have performed this task for the last 2 years. That is, such a task to ensure the security of the Winter Games is already facing us, ”commander Colonel-General Vladimir Shamanov said recently. “In the event of such a need,” he continued, “we will be able to increase our efforts. Today I am absolutely sure that Russia is able to hold the Winter Olympics at the highest level in terms of ensuring its security. ”

According to Minister of Internal Affairs Vladimir Kolokoltsev, order at the Winter Olympics in Sochi will be monitored by the order of 37 thousands of Russian police officers, as well as at least 10 thousand troops of the Internal Troops, what forces and means will be allocated to ensure security from the Ministry of Defense and the FSB of Russia , not officially reported.

Ctrl Enter
Noticed oshЫbku Highlight text and press. Ctrl + Enter
We are
Olympics without Russians? Not interested!Results of the week. “You can legally go. It is difficult to reach
15 comments
Information
Dear reader, to leave comments on the publication, you must to register.