View of the door 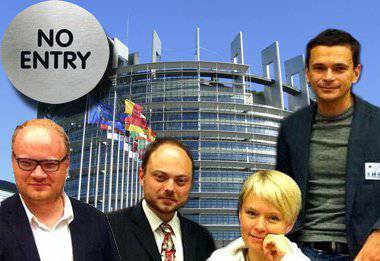 Nadoy compatriots, the Russian radical liberals are beginning to test the patience of the Europeans.


It’s easy to imagine this meeting. High-tekovskie interiors of the European Parliament. Deputation of the Russian radical opposition, which included characters from RPR-PARNAS Ilya Yashin and Vladimir Kara-Murza, environmental activist Yevgenia Chirikova and journalist Oleg Kashin. Host: the organizer of the meeting is the MEP from Poland Marek Migalski, as well as the deputies Alexander Mirsky, Karlis Shaduskis (Latvia) and Vytautas Landsbergis (Lithuania). As they say, well, who does not know the deputy and Russophobe Landsbergis, who is still memorable after the Soviet restructuring.

Probably drank tea. Most likely, branded phobias were pitted into euro space. Someone unremitting sense of hostility to the "empire". Well, the visitors - a bubbling hatred of the "Putin regime." Such almost dissident-Soviet cuisine.

In itself, the event seems so marginal that it would hardly deserve any close attention at all. Another circle of non-fans of Russia. However, during, and most importantly, as a result of the meeting, one curious and important circumstance arose.

One of the participants representing Latvia was outraged by the behavior of young people who arrived from the Russian Federation. Especially the one who bears the name Yashin. As the Latvian parliamentarian Alexander Mirsky stated, “the European Parliament has a set of rules that no one can break, neither deputies, nor staff, nor guests.”

Moreover, after the meeting, Mirsky demanded in writing from the head of the European Parliament, Martin Schulz, to forbid the said guests to return to the parliament building at any time.

The occasion was harsh criticism of President Vladimir Putin and Mirsky himself from the Russian delegation. We note that during the exchange of views, guests (!) - not Lansdbergis - reproached Mirsky for defending the interests of Russia and forming the “pro-Russian lobby in Europe”.
All this is a “logical continuation”, if it is at all possible to discern any logic of the behavior of “Russian oppositionists” who are not loved by anyone who suddenly begins to advocate for their own country.

All of Mirsky’s “guilt” was that he doubted the political nature of the persecution of Yukos’s ex-head Mikhail Khodorkovsky, as well as the need to discuss the lack of drinking water from Pussy Riot Nadezhda Tolokonnikova within the European Parliament.
Meanwhile, as calculated by the representative of Latvia, who had fallen out of favor with the radical liberal oppositionists, the number of deputies who came to the meeting was 0,5% out of the total number of the European Parliament.

This figure, better than any assessments and comments, describes the state of complete disintegration into which the movement has flown, which had recently been blown up by thick “swamp” bubbles.

Their last hope, Lyosha “Kirovles”, is constantly putting something to it, awaiting an appeal on the sentence already handed down to him. Their belated and nervous groups run on the sidelines of foreign missions and parliaments, replicating, as everyone there has long understood, absolute nonsense about the current situation in Russia. Their task of upholding gay propaganda and other new "joys" of Western democracy turned out to be impossible and unsuccessful.

Well, let them go again, talk to old Landsbergis. After all, perhaps, nothing more remains to them.

Ctrl Enter
Noticed oshЫbku Highlight text and press. Ctrl + Enter
We are
Ghetto for RussiansGrybauskaite is waiting for your Nuremberg?
Military Reviewin Yandex News
Military Reviewin Google News
29 comments
Information
Dear reader, to leave comments on the publication, you must to register.