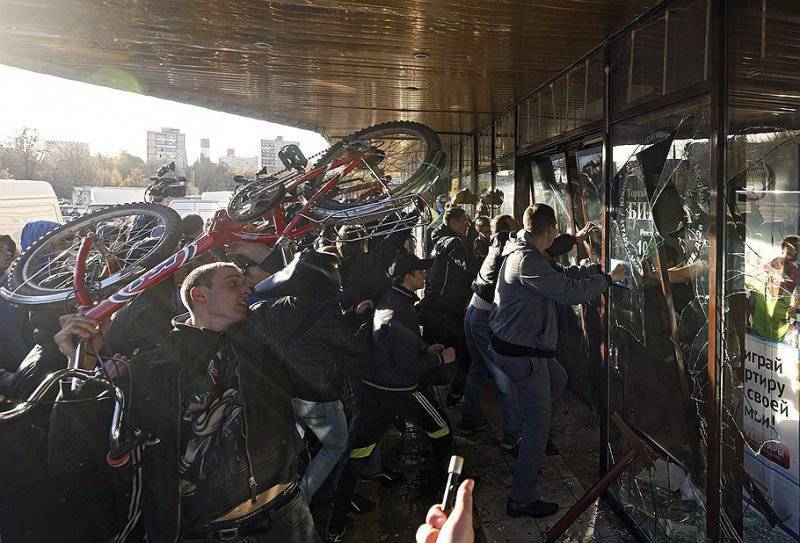 Outskirts of Moscow illegally opposed the migrants. Yesterday in Moscow, the so-called people's gathering in memory of the 25-year-old Egor Shcherbakov killed a few days ago ended with the most widespread unrest in the past few years.

The instigators were the nationalists, who, stating that the killer of the young man was a "man of Caucasian appearance", called for the pogroms of migrants. West Biryulyovo, where the confrontation between the police and right-wing radicals unfolded, by Sunday evening more resembled a war zone.

In the city, the Vulkan-5 plan was announced, which was last introduced after the terrorist attacks in the subway, and Interior Minister Vladimir Kolokoltsev demanded that Shcherbakov’s killer and instigators of the riots be found, threatening to dismiss the leadership of the metropolitan police.

The first national gathering of nationalists and residents of the area Biryulyovo West conducted "hot pursuit" - a day after the murder of Yegor Shcherbakov. Operatives told "Kommersant" how it happened.

On the night of Friday, at about two o'clock, 25-year-old Yegor Shcherbakov was returning home with a girl. Near the house entrance in Vostryakovskiy passage, 7 (Mr. Shcherbakov lived there) an unknown person approached them and, according to the investigators, began to insult the girl. Between young people began a verbal skirmish, which quickly turned into a skirmish.

First, the alleged killer, pushing Yegor Shcherbakov away, hid behind a parked car, and when he rushed after him, he hit him with a knife. As the investigators say, the blow was struck with a folding knife and fell between the ribs in the back. Yegor Shcherbakov died on the spot, before the ambulance arrived, and an unknown person disappeared from the scene of the crime.

The killer, they say in the police, was "a man of Caucasian appearance." Already on Friday, his photo taken by surveillance cameras was published in all nationalist communities on social networks. And in 22: 00, about a hundred local residents came to the scene of the murder of Yegor Shcherbakov to demand an immediate investigation from the authorities. After talking with the representatives of the police and the local government, they quickly dispersed, but that same night a new people's gathering was announced.

“The start time in 16: October 00 13 near the scene of the murder of Yegor Shcherbakov. Those who are from other areas - to get to the place carefully, so as not to be intercepted on the road by lawlessness by the police. When questioning all the policemen to answer that they are going to meet with their acquaintances, ”such instructions appeared in most of the specialized communities of the Vkontakte social network on Sunday night.

Exactly to 16: 00 on Vostryakovsky passage began to gather local residents and young people, like football fans. They did not have any political symbols, flags and posters on their hands. It all started peacefully: one of the leaders of the “Russians” movement, Alexander Belov (Potkin), entered the center of the crowd with the head of the local government, Viktor Lehavin, and the official said that youth squads would be created in Biryulyovo. The crowd responded to complaints about the "domination of migrants" and the local fruit and vegetable base, which allegedly became the center of the spread of "non-resident criminals."

The participants of the meeting got tired of listening to politics rather quickly, and they decided to go to the shopping center "Turquoise", located in the neighboring Bulatnikovskaya street. In the crowd, someone said that it was there that migrants work. “Where do you let the crowd go?” They have already begun to smash cars! ”Shouted Mr. Potkin at the head of the council, watching the heated youth gaze.

Around 20, people broke into the lobby of the mall, smashing windows and throwing flares. A fire started. In the clouds of smoke, it was clear how the staff of the shopping center and the sellers were trying to escape through the back door. At the same time, at about 40, riot police officers at first simply watched what was happening and only after 20 minutes did they decide to push the crowd back from the Turquoise. Started the first detention. There were seven people in the paddy wagons, but they failed to take them to the ATS: the crowd, chanting "Release" and "Russia for the Russians!", Was surrounded by a police car trying to drive along Bulatnikovskaya Street. As a result, Avtozak returned to the shopping center and several detainees left it. Crashed into small groups, young people discussed the perspectives of “going crazy on the area” and offered each other “sharpen knives”.

The crowd greeted the nationalists with applause. Right-wing radicals crowded for another half an hour without any goal, after which, following shouts from the crowd “To the base!”, They moved towards Vostryakovsky passage, where the vegetable base is located. The nationalists smiled and planned their evening. “There is a chock in the area most of all, you can have fun,” the correspondent of “Kommersant” heard conversations in the crowd.

In the column, in order to “just see what the base would have,” many married couples went with their children. Along the way, right-wing radicals warm up: they turned over bins, garbage cans, tore road signs out of the asphalt and threw empty bottles at policemen. “We’ve got it, let them go to the village,” an elderly woman to her companion argued the need for references and deportations.

The riot police several times tried unsuccessfully to block the movement of the crowd, but every time people walked around the living chain through the courtyards. Not everyone was able to reach the vegetable base: some of the nationalists decided to go to the destination bypass, but in the end they were cut off by the riot police. Those who arrived quickly knocked out the gates of the vegetable base and searched the territory of the complex in search of visitors. They could not find anyone: the vegetable warehouse was empty. Turning over several soda fountains and not finding what they were looking for, the nationalists retired.

At this time, around 800, people tried unsuccessfully to get through to the vegetable depot from the Podolsk Cadets street. The performance of the nationalists in terms of their scale was more like the “Russian march” or the festivities in honor of the victory of the national hockey team. The eight-lane carriageway was completely filled with people, sometimes frankly drunk, who shouted the traditional: “Russia for the Russians, Moscow for the Muscovites”; over the crowd at the same time waving Russian flags.

Accidental visitors at the epicenter from the Caucasian republics or Central Asian countries hid in the bushes, but not everyone was able to leave.

They were beaten in groups, while police officers standing nearby reluctantly drove them away from the victim. Closer to 20: 00, on the Podolsk Cadets Street, the impressive forces of the fighters with their shields were pulled together, and the crowd began to thin.

Nationalists broke into groups and scattered around the courtyards in search of visitors. One of these groups reached the Biryulyovo-Tovarnaya railway platform, where she smashed the collapse with watermelons and turned over the Zhiguli standing nearby.

The fact that in Moscow an extraordinary state of emergency occurred, is indicated by the fact that by this time the “Vulcan-5” plan had been introduced in the capital. The last time such operational activities were held three years ago, after the terrorist attacks in the Moscow metro (then 40 people died). The plan is introduced, if necessary, the detention of highly dangerous armed criminals, allows for the detention to resort to the most stringent measures. At the same time, Interior Minister Vladimir Kolokoltsev declared an alarm to the entire staff of the Moscow police. This measure implies the immediate arrival of the service, even those who are on vacation. Until the alarm is canceled, they serve around the clock.

The police department said that the riots in Biryulyovo were provoked not by local residents, but by mob riders. These are young people, about 350 – 400 people, who, as the police say, were tricked through social networks, saying that “the chocks completely let themselves go, and at night people were afraid to go to the streets”.

However, the efforts of the authorities did not calm down the aggressive crowd. At the very beginning of Podolsk Street, motorists were met by police cordons — patrol cars and trucks, so it was impossible to drive. On practically deserted streets only occasionally buses passed and cruised small groups of young people. Despite the abundance of riot police and other police units, the young people calmly met the need two steps from the police. Practically at each large outlet there was one or two policemen with riot policemen. The outfits of policemen in helmets passed through the yards of residential houses, checking documents from young people.

Late in the evening, the square in front of the Turquoise shopping center became the center of action. It was more like a place of a recent battle: smoke was pouring out of a building with broken shop windows, and a police helicopter circled above it in the night sky. About several hundred young people returned from time to time, who periodically blocked the roadway. Finally, a police truck appeared on the square. Bottles flew into the fighters jumping out. The police severely pushed the most active attackers to the playground and took the ring. However, comrades came to help the detainees. Here on the square began to appear all the new police cars that filled the entire territory in front of "Biryuza".

This was also called special vehicle "Tiger". Police officers began pinpoint detentions. According to the observations of Kommersant correspondents, among those people who still remained on the square, there were a lot of local residents, including children and dogs.

According to police, riot police "acted tough, but within the law." A criminal case was initiated against the detainees under art. 213 "Hooliganism", which, most likely, will be supplemented by Art. 318 "The use of violence against the authorities".

Representatives of national diasporas immediately responded to the unrest. The head of the Federation of Migrants of Russia, Muhammad Amin, appealed to them not to leave home. “There may be attacks in different parts of Moscow. Nationalists are very aggressive, ”he told Interfax. According to Mr. Amin, it is better for migrants and foreigners in general “not to walk and not to visit public places”.

Judging by the actions of the police, the authorities really expected the continuation of large-scale riots already in the city center. Police around the perimeter cordoned off Manezh Square. Several hundred riot police in full combat gear did not allow passers-by to go there. Near the Historical Museum are located a half dozen covered awning police trucks with soldiers. Later, Red Square and Alexander Garden were taken under similar protection.

During an emergency meeting at the Ministry of Internal Affairs held late Sunday evening with the participation of the head of the Moscow police Anatoly Yakunin, Minister Vladimir Kolokoltsev threatened that if the killer and instigators of the riots in Biryulyovo were not established and arrested in the near future, "other people will head the police units."

According to the Ministry, about 100 people were checked for involvement in the murder and "large-scale measures were carried out to identify and search for the suspect." 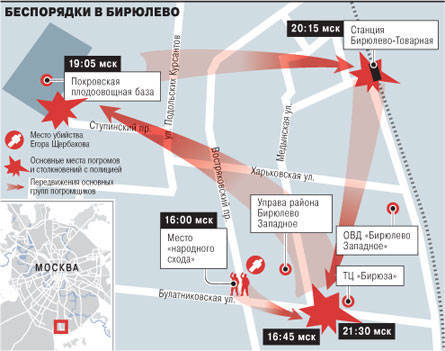 Ctrl Enter
Noticed oshЫbku Highlight text and press. Ctrl + Enter
We are
Reports from the militia of New Russia for 2 September 2014 of the yearBiryulyovo exposes state and public ulcers
Military Reviewin Yandex News
Military Reviewin Google News
420 comments
Information
Dear reader, to leave comments on the publication, you must to register.