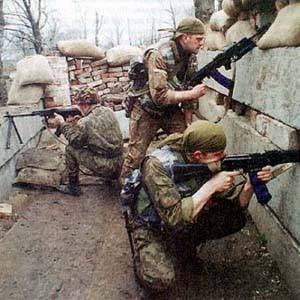 Anyone who wrote and filmed about the Chechen war knows that the worst thing about returning there is not being able to be shot at from an ambush, or shot down by helicopter, or colliding with your own car in a fog a tankand in another: in receiving the bitter news of the heroes of your reporting. He is alive (even if seriously wounded - but alive!) Or is already supposed to drink a third funeral toast for him. This is the thought that gnaws at you while you fly to the post office in Mozdok, then to the “turntable” to Khankala, and then to the “armor” to where you became related for a week or two with marines, paratroopers and just infantry ...


I remember how in December 1999 flew from Kaspiisk to Mozdok across Chechnya on the world's largest Mi-26 helicopter. "Cow", as it is called in the army, takes a lot of people, more than the general train car. We sat on the positions many times. And to us sat down waiting for the replacement or short holidays, the war-smelling frail. Black hands of gunpowder, diesel and Chechen mud, they carefully took a bunch of my pictures from a previous trip and quietly said: “We’ll give Stepanich, he is in a hospital in Mozdok, and the lieutenant died when they came to Grozny, the sniper got him out, and Kolya wasn’t intelligence , mine exploded. " It turned out that I was the last one who shot them alive ... What can I say. The soul wanted to break out of my body and see them. But everyone has his turn before death.

October 21 last year, the day when the Basayev thugs captured the Nord-Ost in Moscow, I spent in the mountains of Dagestan, on the border of Georgia and Chechnya, where the garrison of the BTG (battalion tactical group) of the Caspian Marine Corps settled flotilla. Already in the evening we drove up to the Giselle bridge, destroyed by the flood. A graduate of the Novosibirsk General Military School of 2002, Lieutenant Sergey Verov, settled here with his platoon. He voluntarily asked for a battalion, leaving for the war. The battalion, inheriting traditions from the battalion, which in January 1945, crossing the river, took four lines of enemy trenches and ensured the success of the division. All soldiers were then awarded the Order of Glory. Platoon commanders - with orders of Alexander Nevsky, company - of the Red Banner, and two, including the battalion commander, became Heroes of the Soviet Union.

I was a little surprised at the thoroughness and seriousness of the lieutenant, how his soldiers and sergeants respect him.

In the report, “The Mountain Marines” (“Warrior of Russia” No. XXUMX 12) wrote: “The commandant recently visited the farm” Verov was satisfied with his service and advised him not to relax, to be ready for all-round defense. Verov showed us what it is: in seconds from all four sides, his temporary fortress bristled with trunks.

Lieutenant Verov decided to serve, build a military career. It seems that after six months of service in the mountains, he could well expect to be promoted, as is the case in war.

Probably, this would be the case if, in February of this year, BTG Marines, in connection with providing security at a referendum in Chechnya, were not urgently relocated to the Vedeno Gorge, in the very lair of the unfinished bandits. The Caspians came to the place where they fought gloriously in the second Chechen campaign. Presumably, Basayev wanted to reckon with them. Moreover, our top officials have ordered, in connection with the referendum, not to particularly anger the local civilian population. February 24, during a reconnaissance and search operation, a reinforced company of marines was ambushed by “peaceful” residents of a village with Arab mercenaries attached to them. Our losses suffered: there were killed and wounded, during the evacuation of the company the militants destroyed the helicopter ...

In the main headquarters I was reassured: they say your lieutenant is alive. And then Sergey's mother, Vera Ivanovna, called from Novosibirsk: "We read your material and saw a picture of a son. He died February 24." It turns out that the officers of the headquarters are sometimes "mistaken." And the mother would forgive them for this mistake if the son would live ...

What actually happened was told to me by the commander of the Guards Moscow-Chernigov Marine Brigade of the Guard, Major General Sergei V. Pushkin, who had introduced BTG into Chechnya.

When the company led by the battalion commander entered the ravine, the intelligence reported: on the heights we see armed men. Reported to the headquarters of the group. From there, they answered that there were no strangers around, and with guns - supporters of the new government. Soon, the company buried itself in an unspecified minefield. And then, according to our "supporters" punched out of AGSs (automatic grenade launchers) and rotary machine guns. The platoon of Lieutenant Verov, as the best and most prepared, went ahead. He suffered the first loss. Pushkin reported upstairs about the dead and wounded: he sent reinforcements and asked to send helicopters. The authorities replied that there were no militants, and you, having not figured it out, fight each other.

A company with a battle began to emerge from the gorge, but on its way "peaceful villagers" managed to place mines, one of which blew up Lieutenant Verov, who had taken the machine gun of a killed intelligence officer before it. In the last minutes of his life, he thought and acted as an officer, knowing that two people were dragged out of a killed man, and four soldiers were wounded, and that this would lead to new casualties. He, bleeding profusely, shouted: "Do not send people." His machine gun worked while his heart was beating - the wound was fatal.

Ours determined that about forty militants are fighting: local and two small gangs of mercenaries.

Kombrig asked the command to open fire on the enemy of the howitzers: the pinwheel was already burning. He was refused from above: you will cover the village, and on the nose a referendum. After destroying most of the gang, the marines were evacuated by helicopter. At first they loaded the wounded and the dead, then they put the sailors and sergeants in jail, and only then the officers, who considered all of their own, living and dead, firing, climbed onto helicopters. The pilots were amazed: “Look how you are, the officers were the last. Then one colonel was the first to sign, although the situation was not your example.”

After the battle, award lists were written on the distinguished ones. A few months passed, and they, speaking in military language, are unrealized. Not in time, it turns out, he accomplished his feat in his first and last battle, Lieutenant Verov. A peaceful life has been declared in Chechnya, it is preparing for the election of its president. Therefore, the bloody battle almost did not receive publicity in the omnipresent press.

When I write these lines, one party, called Narodnaya, is looking for heroes all over Russia. Watching what kind of heroes! Judging by the hype in the press, this is Roman Abramovich, who bought the English football club Chelsea for fun, or a werewolf policeman who deliberately became a gangster.

In the heroes of the brigade of the marines of General Pushkin in connection with the stabilization of the situation selected one-and-a-half salaries. Meanwhile, on the marble slabs of the monument in honor of the fallen during the second Chechen war there will soon be no place. The marines continue to serve in the vicinity of Vedeno, and on the nose the election of the president of Chechnya.

I can only wish them military happiness. And not to lose hope that the Supreme Commander will reward them, living and dead, as that legendary battalion of glory was awarded in 45, which heirs by right are.

And further. Lieutenant Verova's mother called from Novosibirsk and reported that his younger brother, a university student, wrote a statement asking him to be assigned to a military department in order to become an officer. Russian officer.

Do not look for batches of heroes in Russia. They are and will be, even if someone stubbornly does not want to notice them. And if so, then Russia will live, which we have not yet lost.