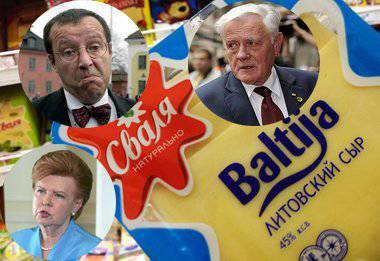 Attempts to annoy Russia are increasingly tearing off the Baltic elites from their own countries.


There are a number of newly-minted European states, all the material well-being of which is based on interaction with Russia. This happens for one simple reason. It is prosaic: the products that these countries produce cannot be sold to them except in our country.

Of course, the elites of the same Baltic republics are very pleased with their status as leaders of small but proud EU member states. Most of their young people, having received direct access to Schengen, preferred to choose the place of residence and work of the country of the “old” Europe.
However, the rest of the citizens somehow have to live, pay something bills, of which there are many in the modern world.

The paradox is that the EU is quite different from what many residents of the same Ukraine should imagine. Hurriedly exchanging the newly acquired “independence” to associate with the EU, they still do not realize all the joys of the quota system, protectionism, and rigorous inspections — everything that is civilized but inexorably ranks Europe into regions of different importance and purpose.

The other day, we suddenly found out that Lithuania 85 provides all its famous (in the CIS) dairy products, various cheeses and sour cream, to Russia. Therefore, the decision of Rospotrebnadzor to suspend the import of dairy products from Lithuania because of its dubious quality caused the government of this cocky power, proud of its membership in NATO, to be hysterical.

Due to the simple mixture of the same sour cream and sprat, in many respects there is another ruler of the Baltic seas - Estonia. Well, of course, due to the exploitation of the port of Tallinn, built during the years of the hated “occupation by the imperial neighbor”. Now, when in St. Petersburg one after another new sea terminals are being introduced, the relevance of transit through Estonia and its neighbor Latvia is decreasing. In proportion to this, the importance of exporting sour-milk, dairy, wool-knitted and other commercial products to the unloved, and to some even the hated "empire," increases. She, the villain, takes and refuses the specified good to buy. Fortunately, it has its own cows, and in general the world market is littered with similar products.

The beloved friends of the Baltic states from the EU are smiling sweetly, but they are in no hurry to buy products from Estonian cheese-makers. Young, clever workplace - yes, they take it. Why not take it? After all, in schools and institutes built within the framework of the same “empire”, excellent specialists are trained.

Well, France, Germany, Spain, Italy, Denmark together with Finland will “do so much” with milk, that drinking is not too much to drink. All that EU officials can help in this case is to grumble at the strict sanitary rules adopted in the Russian Federation. The rest - the problems of the Balts. However, the elites, set by the protection of the West, associating their well-being and future exclusively with it, continue to depict the fear of threat from the East.

So Estonian President T. Ilves called inadmissible attempts to prevent Ukraine, Moldova and Georgia from strengthening their partnership with the European Union. At a meeting with his colleague from Poland, B. Komorowski, he said: “Economic blackmail, threats and political pressure to achieve adherence to the Customs Union, which these states are currently experiencing, are impermissible. The development of these events in the coming months should be monitored with particular attention. ”

It is impossible to say where the US citizen Ilves, who moved to Estonia in the 1991 year, saw all the horrors listed by him allegedly caused by the Russian Federation. However, he noted that he considers the Russian restrictions on the “milk” from Lithuania to be a “punishment” for supporting the policy of the EU Eastern Partnership. “Lithuania, which is also currently the presidency of the European Union, needs our general support,” emphasizes the strongly national leader.

In addition, prior to his arrival in Krakow, Ilves visited Chisinau, where during an official dinner he named the most important thing that Moldova chose for itself the “European future”.

We venture to suggest that in the rest of Europe, the “European future” is seen somewhat differently than in those fragments of the post-Soviet space, where democracy, for example, is understood as the possibility of Nazi parades in central squares. Every time it was embarrassing to see how old legionaries (who probably repented of their past sins more than once) were agitated by nationally preoccupied politicians and pulled out for public viewing as “heroes of the nation”.

And all this with the connivance of the presidents Russophobes brought to their seats straight from overseas - Ilves (Estonia), Adamkus (Lithuania), Vike-Freiberga (Latvia). In many ways, their activity was reduced and reduced to obstructing normal relations between the Russian Federation and the EU, as well as to the direct service of any actions directed against Russia.

We have to admit that this path is a dead end. Reasonable politicians in the same Baltics have long realized this and are trying to build bridges of cooperation with a large neighbor. However, unfortunately, while in most cases they do not decide on further ways of development of their states, risking under such rulers forever become a “European past”.