Russians don't want a secession of the Caucasus

October 8 2013
63
A study by the Agency "Polytech" showed that Russians do not feel themselves disadvantaged by the majority and are not against lezginka on the streets
In the Public Chamber presented the results of the sociological research "The national question in the socio-political life of Russia." 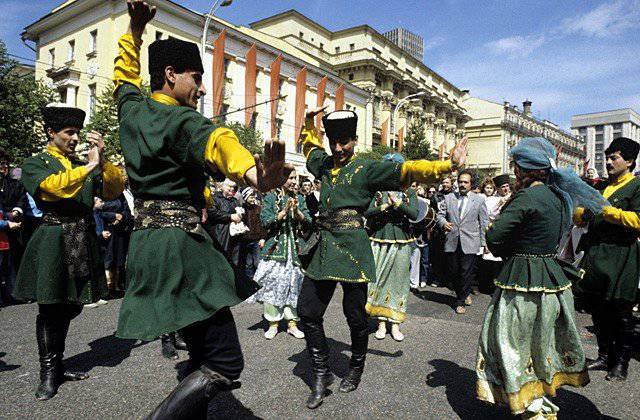 The study was conducted by the Agency of social technologies "Polytech", edited by Mikhail Romanov. The focus of the study was on studying the opinions of three groups: the indigenous nations of the North Caucasus, the Volga region, Siberia and the Far East; the Russian population of these republics; Russian population metropolitan regions. More than 4000 thousand people were surveyed in 400 cities from all subjects of the Russian Federation.

The survey answered the following questions: should the nationality be returned to the passport? Do Russians oppress Russia? Is the North Caucasus worth separating from the Russian Federation? Do I need to call on Caucasians in the army? And even to the question of how Russians relate to Lezginka on the streets of their native city. And also, is there a future for nationalist parties, and is Islamization threatening Russia?

51% of respondents spoke in favor of introducing “nationality” in the passport. As a rule, supporters of the return graphs said that it is necessary to preserve the "roots" and "national traditions." 35% of respondents believe that this should not be done, 14% have not decided on the answer. Basically, Russians (54%) speak for the return of nationality to the passport, the residents of the North Caucasus strongly oppose this idea - 60%.

When asked whether you believe the statement that “Russians in their own country that they historically created were in the role of an oppressed majority,” 37% of Russian citizens answered in the affirmative. Every second (53%) survey participant expressed the opinion that this statement does not reflect the true situation. The absolute majority of representatives of the titular peoples of the North Caucasian republics do not consider that the Russian people are in a depressed position.

“The titular North Caucasian peoples do not see anything reprehensible in the actual non-admission of Russians to the republican administrative elites,” the report says.

Half of the survey participants (51%) expressed the opinion that it is possible to indicate the nationality of the perpetrator, while many added that it was not only possible, but necessary. 40% against indication of nationality. Most often, the Russians of the capital regions (61%) spoke in favor of indicating the nationality of the criminal. In the capital cities, which are the centers of attraction for migrants (labor, education, leisure, etc.), the population associates the increase in crime with visitors. Most of the representatives of the titular peoples of the North Caucasus spoke out against indicating the ethnic affiliation of criminals (67%).

The topic of secession from Russia of some republics of the North Caucasus was constantly discussed after the collapse of the USSR. In the 90s, Chechen separatists fought for secession of the Caucasus; now, not only Russian nationalists, but also journalists and politicians of liberal convictions are demanding secession.

In recent years, residents of Chechnya were not called in to the Russian army, and the call from Ingushetia and Dagestan was significantly reduced. This was due to the unwillingness of Caucasians to submit to military discipline. However, the survey results show that the majority of Russians (63%) believe that residents of Chechnya, Ingushetia and Dagestan should be drafted into the Russian army. True, there were ideas about the creation of separate national parts. The call was made by 63% of respondents, 28% against. Representatives of the titular peoples of the North Caucasus overwhelmingly spoke in favor of the appeal - 83%.

In recent years, conflicts have arisen regularly in many Russian cities related to the provocative behavior of Caucasian youth. In particular, young Caucasians, who dance lezginka in public places of large cities, cause considerable irritation among local residents. To reduce tensions in society, the heads of the Caucasian republics have repeatedly spoken against lezginka on the streets of Russian cities.

Despite this, the survey showed that 38% of respondents are positive to the Caucasians' dances, 39% are neutral, only 21% are negative. However, even respondents who said that they were dancing towards Caucasians in a neutral or even positive manner mentioned the antisocial behavior of Caucasian youth.

The future of nationalist parties

46% of the Russian participants in this poll were ready to vote for the party, which would declare the protection of the interests of the Russians as the main target, 54% for the Orthodox party.

Most Russians, including Muslims, are secular. At the same time, residents of Chechnya and Ingushetia are largely guided by Islamic norms.

Most Russians, including residents of the Caucasus, believe that polygamy in Russia should be banned everywhere - 57%. Polygamy is favored only in Chechnya and Ingushetia - 62%.

There are no registered Islamic parties in the Russian Federation today, however, according to the results of this study, it can be argued that if such were created, they would have a certain potential. According to the poll in Dagestan and Bashkortostan, Islamic parties could fight on equal terms with other political parties, and in Chechnya and Ingushetia, no party could have been a real competitor to the Islamic party.

The leader of the New Force party, MGIMO professor Valery Solovey is skeptical about the findings of sociological polls: “Here we are talking in questions and formulations, you can get any result, whatever you want, the main thing is to correctly formulate the question.”

The professor believes that if sociologists asked: “Do you consider the North Caucasus to be a part of Russia?” - the majority would answer that they do not.

“The purpose of this survey was to show that the Russians are positive towards the North Caucasus, that they consider it a part of Russia,” says Nightingale.

Director of the Information and Analytical Center "Sova" Alexander Verkhovsky, believes that the state should not be led by nationalist-minded citizens.

“I would not like to comment on this report, I read it carefully. I would like to say what the state needs to do: we should not be led by the nationalists, even if it seems to us that they represent the position of a significant part of society. The state must protect the constitutional foundations. Fortunately, the survey shows that the majority of citizens did not succumb to nationalist propaganda, although the trends are still pretty sad, especially if you look at the trends by age. The survey shows that there are problems, but the state does not do anything, and it is eliminated from their solution. Negotiations that the authorities are conducting, for example, with representatives of diasporas, with citizens in Pugachev, are not perceived by the population. In fact, the state must declare that it will do this and that, and begin to do so. It must follow the stated principles, ”Verkhovsky told the Russian Planet.

Ctrl Enter
Noticed oshЫbku Highlight text and press. Ctrl + Enter
We are
Why we lose the North CaucasusSiberia - New Central Russia, or How the South of Western Siberia Will Become the Center of New Industrialization
63 comments
Information
Dear reader, to leave comments on the publication, you must to register.