The AvtoVAZ director will deal with the missiles 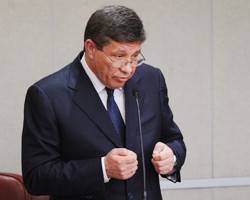 
Komarov and Ostapenko’s candidatures, according to newspaper sources, were agreed upon in the Russian government and presidential administration. "The main argument in favor of the appointment of Komarov was the fact that he managed to rectify the situation with AvtoVAZ. Having received the company in 2009 with a net loss of 49,2 billion rubles and debts to banks 38 billion rubles, he was able to optimize production," interlocutor edition.

As for the choice of Ostapenko, his current position also played an important role. "The scientific direction will prevail in the agency, since the customer represented by the Ministry of Defense will order products directly from ORKK," said the source of Kommersant, who added that the decree to remove Ostapenko from the post has already been signed.

It is reported that Popovkin’s resignation was largely predetermined by his disagreement with the reform dividing Roskosmos into an agency and an ORKK. Instead, he proposed creating a state-owned corporation like Rosatom. Popovkin stated that it is worth making blocks of shares of space industry enterprises in the authorized capital of Roskosmos and giving the department the right to directly manage the industry, but this idea has not been understood by federal officials.

About a possible change of the head of Roscosmos started talking two months ago. On August 1, at a government meeting, Deputy Prime Minister Dmitry Rogozin proposed that Deputy Minister of Industry and Trade Igor Karavaev be appointed to replace Popovkin.

At the same meeting, the Cabinet of Ministers, Popovkin, refused to take responsibility for the Proton-M launch vehicle crash that occurred on July 2, which was the reason for a tough conversation between him and the ministers. Following the meeting, the head of Roskosmos was reprimanded with the phrase “For violation of ethics and misunderstanding of responsibility for the industry”.

Ctrl Enter
Noticed oshЫbku Highlight text and press. Ctrl + Enter
We are
A space corporation is being created in RussiaIndustry is being pushed off Roscosmos
Military Reviewin Yandex News
Military Reviewin Google News
120 comments
Information
Dear reader, to leave comments on the publication, you must to register.