October 8 2013
41
DARPA, the Pentagon’s Advanced Defense Research Agency, has a reputation as an organization that readily uses innovative solutions for its practical tasks. Such well-known threats to personnel and vehicles, such as improvised explosive devices, have caused the emergence of the Transformer program.


In their initial requirements for Transformer, DARPA asked the participants to “demonstrate a four-seater, flying and transportable vehicle along the highway that provides the unit with mobility independent of the terrain. The vehicle will be able to take off and land vertically, with a minimum 250 combat range of nautical miles on one fuel tank. ”

Translation of an article from CodeOneMagazine, 26 May 2013, Eric Hehs, illustration author Doug Moore 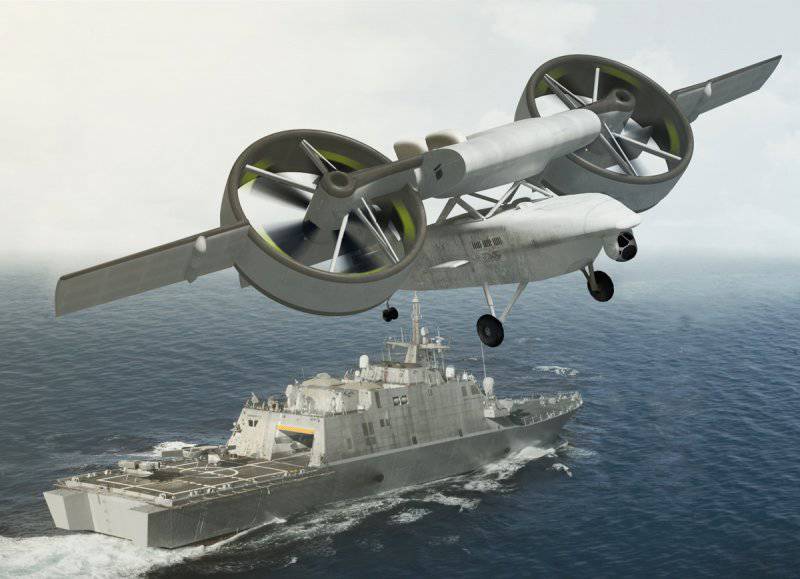 "Transporting and supplying troops to difficult terrain has become a major problem, especially since the US military is switching to using smaller and more distributed combat units," explained Kevin Renshaw, who heads Transhemer’s program at Lockheed Martin Skunk Works.

Skunk Works formed a team in 2010 with Piasecki Aircraft Corporation and Ricardo, Inc., which were selected for the DARPA Transformer program. At the first stage of the program, the Skunk Works team conducted economic research and developed a system concept for Transformer.

The program, currently in the 3 phase, seeks to develop a new generation of compact, high-speed, vertical take-off and landing, or VTOL, or VTOL, delivery systems.

The scope of the program has since been expanded to focus on universal modular VTOLT, which can adapt to several types of missions with interchangeable payloads. 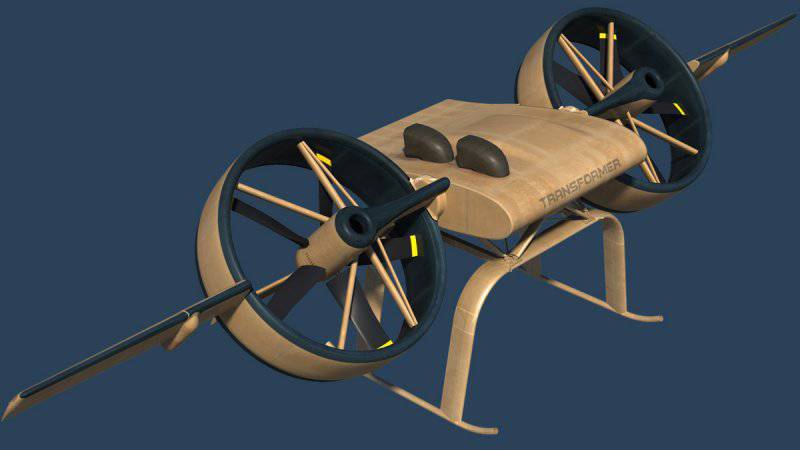 “Transformer will use several key technologies to create operational VTOL systems more compact than conventional helicopters, and in addition to this, moving at a higher speed,” said Renshaw.

Going out to the second phase of the DARPA Transformer program 2011 , the Lockheed Martin team formed its concept and completed a preliminary design review with DARPA and other technicians in 2012 year.

The draft design became the basis for the 3 Phase, which includes the design and construction of a prototype system. Lockheed Martin won the 3 Phase contract for $ 20,3 million at the end of the 2012 year for a detailed study of the design, risk reduction tests that lead to the final design choice. After this, DARPA will evaluate the possibility of building a flight prototype in 2015 year. 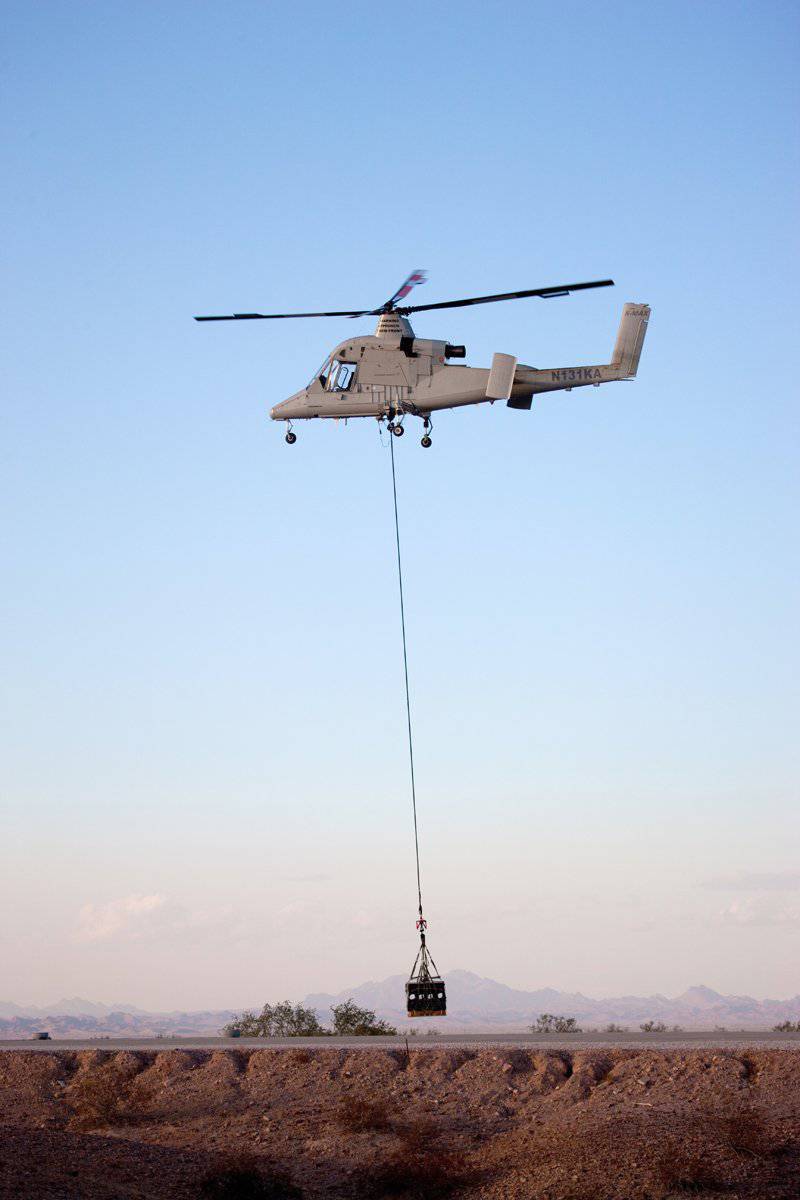 Lockheed Martin has a head start in the development and deployment of unmanned vertical take-off and landing systems thanks to K-MAX, an unmanned cargo helicopter currently operated by the United States Marine Corps in Afghanistan. K-MAX helicopters are piloted remotely, with automated navigation between waypoints, delivering cargo on an external sling.

Engineers at Lockheed Martin Mission Systems and Training have demonstrated the use of these unmanned helicopters to deliver more than three million pounds (1360 tons) of cargo for marines. Systems have limited their interaction with IED servicemen by tens of thousands of hours. The success of K-MAX in Afghanistan led the Marines to extend the demonstration indefinitely.

Mission Systems and Training also contracted the Naval Research Authority to demonstrate advanced sensors and controls for vertical take-off and landing of unmanned air systems, or UAS, as part of the Autonomous Aerial Cargo Utility program. System), or AACUS.

AACUS will test sensors and flight control software so that the next generation of UAS VTAS will autonomously determine landing zones, avoid obstacles and perform landings without remote pilot intervention. The system will be designed to be programmed by soldiers and marines operating in this area, using a simple, intuitive control interface, such as military smartphones or tablet computers of increased strength. This technology enters the Transformer directly as part of the prototype of the upcoming DARPA troop operations management system. 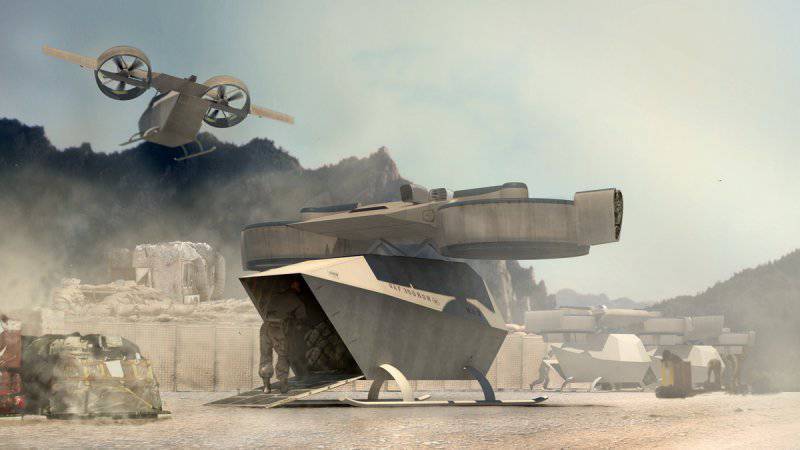 The flight module of vertical takeoff and landing (VTOL), with fans in the annular fairing, is designed to adapt the Transformer to several types of missions, with interchangeable payloads. The load may include cargo capsules, medical evacuation modules, tactical ground vehicles, to realize reconnaissance and impact capabilities.

Tilting duct fans provide a safer application by combining high speed with a landing zone in half size required for a typical helicopter with a similar payload. 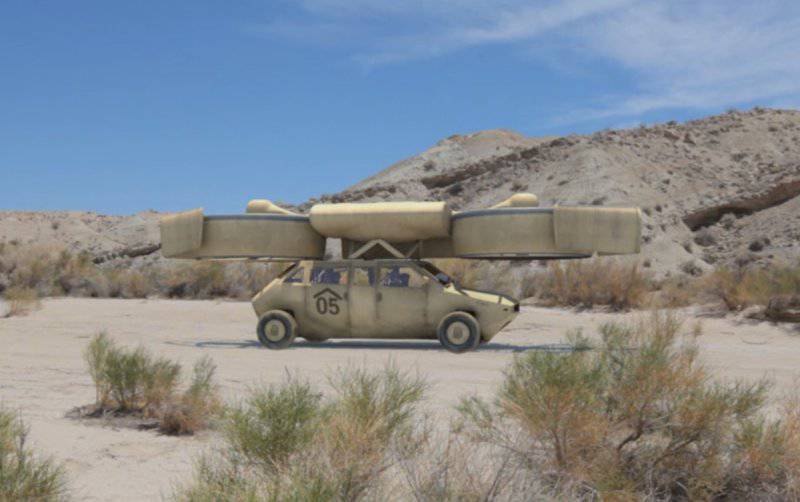 One of the first requirements for Transformer is the possibility of reconfiguring it to travel along one lane of the road. Thus, the system can take up to a maximum of 8,5 feet in width and 30 feet in length (2,6 to 9,1 meters). "Width the road determines the size of the duct fans, ”says Renshaw. “Restrictions lead to a system that fits into a small ship hangar or a C-130 transport. The fan duct design, with the rotor going outside, will also contribute to improving the safety of troops on the ground. ” 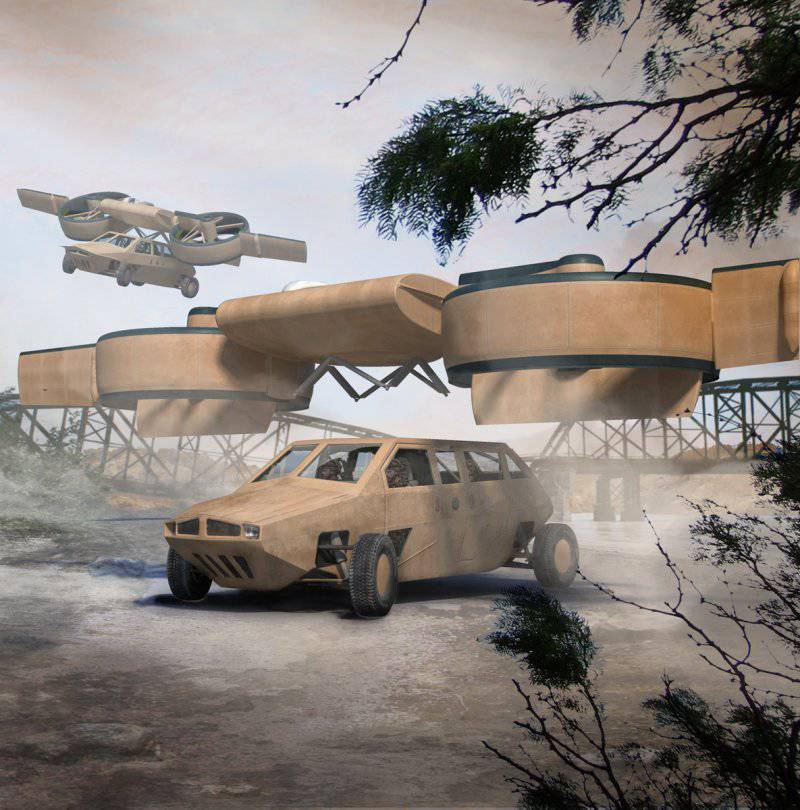 The ability to use the same flight module to complete several missions will reduce costs fleet. Transformers will complement the more expensive specialized attack helicopters, which require piloting by trained crews. “The modular concept reinforces the original vision of DARPA, allowing roles to be varied, offering versatility now and adaptability in the future,” added Renshaw.

Transition from horizontal to vertical flight for takeoffs and landings will be made automatically. The working version will autonomously move to the specified place of delivery, avoiding obstacles on the way or in the landing zone.

The design takes full advantage of the results of the work in the field of digital control of VTOL work done by Lockheed Martin in the past fifteen years in the framework of the X-35 and F-35 programs. Also applied the previous experience of the team with autonomous control of aerial unmanned systems. “Operation of such a system in the VTOL, transient and cruise flight mode requires the use of a flight control system,” says Renshaw.

The company Piasecki Aircraft, a long-leading research helicopter and VTOL, is responsible for the development of the flight module, including the design of the lifting drive. Frank Pyasetsky developed the dual rotor system for helicopters in the 1950 year. Today, its rotors are used on the CH-46 Sea Knight and Chinook CH / MH-47. The company's previous experience with channel fans VTOL includes a series of demonstrators VZ-8 AirGeep. Pyasetsky also investigated the potential of lifting modular systems in an evacuation project for military medical personnel of the US Army.

As part of the Transformer program, the prototype has been enhanced to highlight the development of the flying part of the modular system for the initial demonstration. Flight tests of the prototype will now demonstrate the flying module of the system as a UAS (drone, UAV, unmanned air systems), instead a manned vehicle controlled by a pilot remotely (RPV), as it was during the 2-th phase of work.

"The operating system should always be able to fly as a high-autonomous UAS (UAV), the flight module is able to return to the base after unloading the car," Renshou explained. “A working draft will definitely be able to carry a car as one of many payloads.”

During the 3 phase, the Lockheed Martin team will create detailed hardware drawings for the full-scale prototype of the flight module. The development will include hardware, drive shafts, screws, controls, gearboxes of a lifting transmission system.

The team adapts the existing flight control computers that will be used for the digital flight control system. The team will also select sensors, GPS-navigators, data lines for the operation of the UAS. Long transmission elements, as well as gears and bearings, will be ordered for the first tests of the transmission scheduled for 2014 year.

“The prototype will be driven by existing helicopter turboshaft engines,” explained Renshaw. “Available components will be selected to minimize prototype costs.”

There will also be created tools and software for digital flight control, guidance, transition modes and cruising flight. Control modeling and flight characteristics of the system are conducted in flight control laboratories. These simulations are aimed at ensuring the release of a software package for equipment tests and flight tests.

The team also builds a one-third scale model for testing in a wind tunnel in the fall. 2013 of the year. Tests characterize the effects of flow, energy and controllability throughout the thrust range. This data will then be used to complete the flight model, control laws, and software for the prototype.

Construction of the prototype will begin with the transmission, channel fans, tilt mechanisms. Then channel structures, flight control systems and electronics will be added. The test data of the system kit at the test bench will be used to measure and control thrust and feedback. The test bench will also allow testing of failures and emergency procedures with flight equipment and software in a controlled environment.

The program will end with a demonstration of the ability of the flight module to perform vertical take-off, hang-up, a smooth transition to horizontal flight, and also check the specified flight performance. After the prototype shows that it can fly, as predicted, additional tests with different types of payload will be performed. The specificity of these tests will depend on the requirements of consumers. “We are in contact with US Marine Corps, US Army and Special Operations Command operators to determine the scope of the system,” says Renshaw.

“Once Transformer is fully developed, it will be able to provide future commanders with greater flexibility and ability to transport personnel, carrying out reconnaissance missions, as well as supporting the troops on the battlefield,” concluded Renshaw. The opportunity for small units to operate in the field, to move out of the forward bases, to make deliveries or evacuate the wounded. And all this without asking for the support of high-demand helicopters. This may revolutionize dispersed operations.

Historical reference. Skunk works is the secret branch of Lockheed (Lockheed Martin). Formally, this unit was called Lockheed's Advanced Development Project division, a promising development company. At the head of the unit was "Kelly" Johnson. The top-secret division at Lockheed was established in 1943 specifically for the XP-80 fighter jet development program. The secret bureau received the name after a curious incident. The secret architects of not only Lockheed, but also Boeing, were engaged in the program for the Archangel 2 project (future SR-71), although from the very beginning, Lockheed was preferred. In the early 60s, Lockheed designers were fond of comics about moonshine and secret moonshine, brewed in the woods, including from skunksprinted on the last page of the weekly newspaper. The passion was so strong that workers began to be called “skunks” behind their eyes, and the word, or rather the expression “skunk works” got accustomed and reached the very top after a phone call from the government, the ministry representative was discouraged when he was told that there was “skunk works. The fact is that the word “skunk” in relation to a person is translated as “scoundrel”, but the word is not a sparrow, and the unofficial name of the secret bureau stuck, even the emblem of a funny skunk appeared. 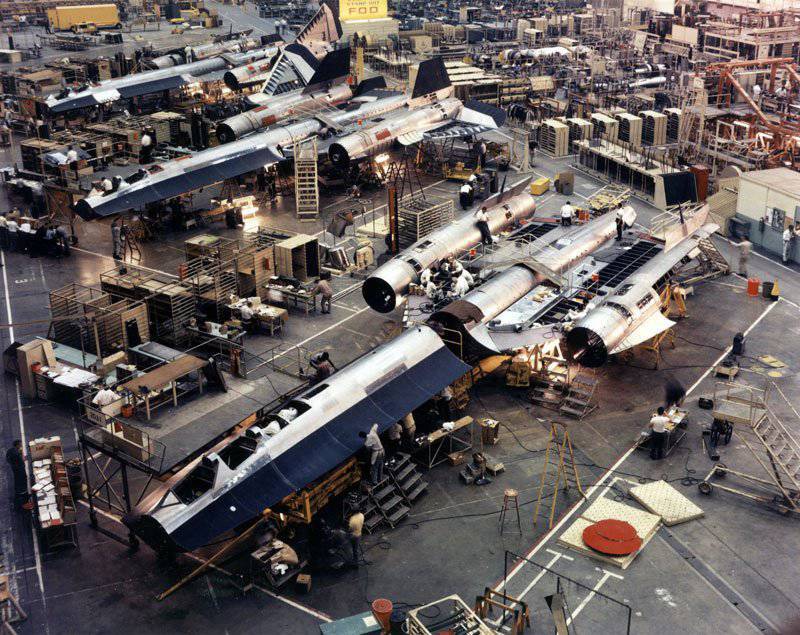 Ctrl Enter
Noticed oshЫbku Highlight text and press. Ctrl + Enter
We are
The state and prospects of development of the naval forces of Ukraine (2013)How the US and the allies got the worst of the newest combat aircraft
Military Reviewin Yandex News
Military Reviewin Google News
41 comment
Information
Dear reader, to leave comments on the publication, you must sign in.