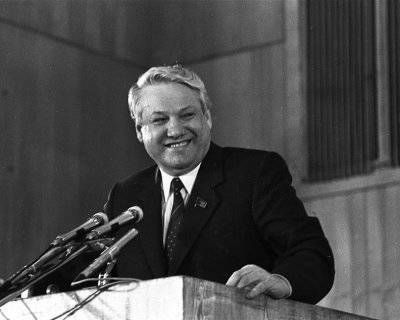 Behind him stood greedy, cynical people, rushing to Russian wealth


October 1993, Moscow. Two decades have passed, and for historians this is, in general, no time limit, but whether this reservation only works in this case is a debatable question. The main conclusions each side of that two-day civil war for itself made.

“The consequences of the coup are horrendous. In essence, an economic and social policy was given that led to extraordinary consequences. A direct consequence of these events is the 1998 default of the year. The second consequence is the complete destruction of parliamentarism and the triumph of authoritarianism ... And the most important thing: for more than a decade Russia was a satellite, America's errand servant, ”Ruslan Khasbulatov, who headed the parliament at that time, gave this bloody event.

The authorities today do not like to remember this much, but the current “stability” regime is still a direct logical continuation of the Yeltsin era, and the notorious “vertical”, it turns out, was based on the blood of those who defended the White House in 1993 ( see Help KM.RU).

Geopolitics, Leonid Ivashov, president of the Academy of Geopolitical Problems, who held the post of lieutenant-general in 1993, shared his memories of the events of those days in an interview with the KM.RU observer.

- I myself was in the White House and saw everything that was happening there. And they dragged me for interrogation, and to the question “Why were you there?” I answered the investigator: “Are you a lawyer?” - “In general, yes, a lawyer”. - “So why you, the lawyer, did not go to protect the law ?! After all, the Decree number 1400 illegal. "

Of course, in October, 1993 was both possible and necessary to avoid bloodshed. And if the oligarchy, who was pushing Yeltsin to forcefully suppressing parliament, would not have already imagined in their dreams those untold riches that they could seize, then there could well have been some sort of agreement.

Yeltsin lived for power. And for the sake of its strengthening, for the sake of his statement in it, he went precisely to the use of force, a completely illegal version of the “pacification” of parliament. In fact, what he organized can be classified as a coup d'état. But still it would have been possible to avoid him, if such greedy, cynical people, rushing to huge sums of money, did not stand behind his back.

Yeltsin would also hardly have gone for the force option if Bill Clinton had not supported him. In the end, he could instruct the secret services to provoke any uprising, a riot among the deputies of the Supreme Soviet themselves. But in the end I decided the way I decided.

Mikhail Poltoranin, a former deputy prime minister in the government under Yeltsin, in his memoirs “Power in TNT equivalent” describes the essence of the Yeltsin and Clinton accords in the following way (the quote is not literal - KM.RU note):

“Boris Yeltsin: Bill, I want to disperse my conservative undemocratic parliament. Will you support me?
Bill Clinton: No, Boris, I cannot support it, because this step will not support our congress.
Yeltsin was offended by a colleague and was already looking for other workarounds as soon as Clinton called him:
BK: Boris, but if you had made any such step so that I could convince Congress of the need to support you, I would then be happy ...
BE: And what should I do?
B.K .: Well, if you gave the United States half of the weapons-grade uranium, you would have a chance to convince Congress.
BE: Yes, take it all! ”

That is, as we see, Yeltsin was ready to give to the Americans at least all of the uranium, even half of Russia, for the sake of one-man power that was not controlled by anyone. He enlisted the support of the West, which untied his hands and allowed him to act brazenly, cynically. And if the States did not support Yeltsin, but would act in accordance with the principles of their democracy, then Yeltsin would hardly have decided on this step.

- Why the army did not support the defenders of the White House?

- I am sure that, probably, 99%, if not all 100% of the officer corps, and the vast majority of sergeants were on the side of the White House. But the army lives on orders. But after all, pay attention to the difficulty with which the leadership of the Ministry of Defense was looking for crews ready to shoot at the White House! Grachev himself told about this how difficult it was to negotiate, how the soldiers had to be misled: they did not say that they were to shoot at people. They said: hit the guy, hit the target, check your accuracy.

This is more eloquent nowhere to say that the army did not support the shooting of the House of Soviets. They tried to persuade the military, promised them apartments, promotions. However, for example, the commander of the Kantemirov division refused to lead Tanks to the White House: brought them to the ring road and then did not lead. Finally, they found Mr. Evnevich, the commander of the Taman Division, who undeservedly got his post. They persuaded him, promised him the Star of the Hero - and he agreed.

- It is strange that Vladimir Putin has never commented on those events. Why do you think?

- The fact is that the shooting of the White House automatically made Yeltsin himself illegitimate, who overstepped the existing constitutional norms, ignored the laws that the Supreme Soviet adopted. Accordingly, the adopted or, rather, the new constitution imposed on the country has become illegitimate. Putin is Yeltsin’s successor, which means that he can always be reminded of this, pointing out that he, too, turns out to be an illegitimate president. After all, he was nominated by the illegitimate Yeltsin, elected and approved by the president according to the illegitimate Constitution. Therefore, Putin is wisely silent, because in this situation it is for him indeed the best option. He prefers not to draw attention to these events once again, and therefore to the legitimacy of his election for the first presidential term.

Ctrl Enter
Noticed oshЫbku Highlight text and press. Ctrl + Enter
We are
List of destroyed the largest and most high-tech enterprises
Military Reviewin Yandex News
Military Reviewin Google News
42 comments
Information
Dear reader, to leave comments on the publication, you must sign in.