October 4 2013
353
"This is what gives me the spirit,
That I am completely without a fight

I can get into big bully.
Let the dogs say:
“Ay, Pug! know she is strong
What bark at the Elephant! ”

It is from this passage of the unforgettable work of IA Krylov that I would like to start a material on how the Lithuanian authorities threatened Russia with the possibility of blocking the road and rail links with the Kaliningrad region. The Minister of Foreign Affairs of the Republic of Lithuania Mr. Linkiavicius expressed such “partner” words. The head of the Lithuanian Foreign Ministry motivated his threats by the fact that Russia, in his words, puts pressure on neighboring countries wishing to integrate with the European Union.

Linas Linkyavichyus:
We could block the transport, and this is not only the train, it is also the delivery of goods, anything
-
writes Reuters.

They say that if the Russian leadership does not stop exerting "anti-democratic pressure" on its neighbors (for example, Ukraine), whose authorities are literally eager to join the "fraternal" Europe, then he, this Linkyavichyus, will show Moscow to "gruel", oxygen ”of the Kaliningrad region, taking the most western Russian region in the blockade. 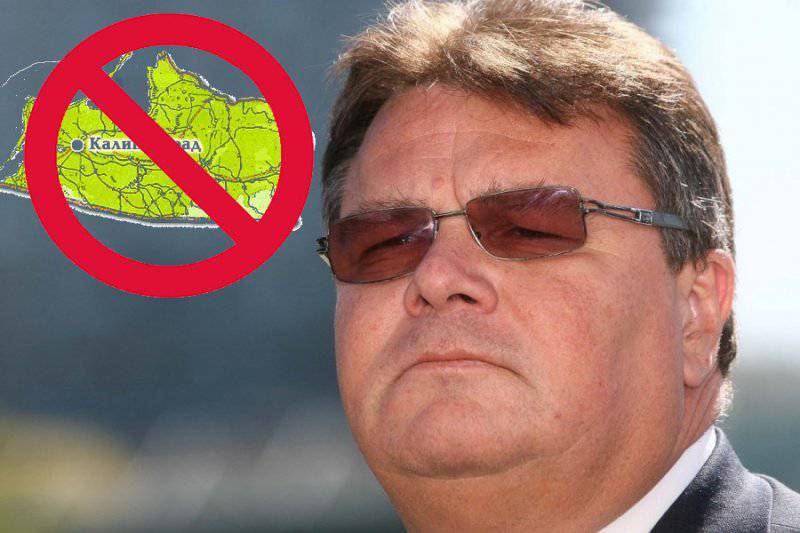 Then, however, Linkyavichyus, realizing that he does not have such a strong immunity to openly threaten Russia, he added:
Theoretically this is possible. Although it was not discussed, we believe otherwise, it is not our methods ...

But this is interesting. A diplomat of a neighboring state allows himself to build a verbal “pugach” with which he is shaken in the direction of the Russian Federation: they say, he could have been a little too small, but this is not my method ... Fear me, Kaliningrad! Fear me, Moscow!

This is a significant intimidation of Russia by Lithuania against the background of preparations for the Eastern Partnership summit, which will soon take place in Vilnius. This summit will be devoted to how concerned the European Union is with the problems of “its neighbors humiliated and insulted by Russia”. Wow, what a painful, apparently theme. For the sake of it - a summit with millions of costs (some aircraft runs with heads of state and other politicians at the expense of taxpayers are worth). And you still need to organize it, concoct a streamlined (for the media) agenda, to once again satisfy someone’s big Russophobic famine.

At this summit, an epoch-making event can take place - the slaughter of Ukraine’s Viktor Yanukovych to the European Union, to which the whole of Europe and a certain (of course, exclusively progressive part of the Ukrainian people) will rejoice insanely ...
Linkyavichyus, apparently, rejoices one of the first. After all, the chance to get a new cash cow for the fraternal European Union economy breathing its last incense does not often fall out. Ukraine is not some kind of Malta. From Ukraine, the Lithuanian minister and associates want to fuck what the Baltic "showcase of the USSR" had from this republic in the Soviet period. And again, after all, free of charge - "for the friendship of the peoples." On some loans from Brussels, after all, it’s not a long time to stretch ...

However, let us return to the “hidden threats” from the Baltic diplomat. So, Linas Linkyavichyus, who in his younger years was an active member of the CPSU, and then during the collapse of the USSR, quickly realized that it was time to build an advanced democrat, in fact, says that, depending on the direction and nature of Russian foreign policy, ready to interfere in her internal affairs. If he, Linkevicius, does not like the foreign policy of the Russian Federation, he will become a “punishing sword.” As an option: he will propose to declare a blockade of the Kaliningrad region ... It is worth noting that this is one of the few political figures in the world who is ready to arrange a blockade for the region of Russia. AT stories The 20 of the first century was one ... Apparently, the “laurels” of that notorious person are not given to the commander (and the minister has the title of commander of two Lithuanian orders) to rest at peace with Linkevicius.

So, we will make an effort over ourselves and suppose that the Lithuanian authorities wanted to show Russia to “fucking off” in the form of blocking the Kaliningrad region: they blocked the railways and highways. I wonder how much Linkyavichyus and all the other supporters of the idea of ​​playing the Russian enclave card think this way to hold out? What kind of sick imagination and what level of Russophobia does one need to differ in order to believe that the pressure on the Kaliningrad region will give Lithuania some preferences? Indeed, in the current history of relations between the Baltic states and Russia, the situation may not follow the scenario described in Krylov's fable. There the Elephant walks, paying no attention to the yapping four-footed under his feet. In the real case, the Elephant may "inadvertently" come ... And then the Kaliningrad region will no longer be an enclave ... No, this is not a threat to the neighboring state. “These are not our methods,” as Mr. Linkyavichus himself says. But in his mind he should keep that option, as he should keep in mind that there is one chief sanitary doctor for every Lithuanian commander in Russia ...

Ctrl Enter
Noticed oshЫbku Highlight text and press. Ctrl + Enter
We are
About how the "dogs" destroyed the Museum of Local Lore, and the "terrorists" restored itOn the streets of the Elephant drove
353 comments
Information
Dear reader, to leave comments on the publication, you must to register.