Statistics of stagnation of the Russian economic system. There are no guilty? ..

October 3 2013
178
The Ministry of Economic Development of Russia recently reported on the trends in the domestic economy from January to early September 2013. The report was the most negative in recent times. Since the beginning of the year, GDP in Russia has grown by only 1,5%, although at the beginning of the year, government agencies announced plans for 3,6% growth for the year. In order to achieve these plans, our economy must literally take off, and take off now and grow in the time remaining before the end of the year, at least twice as many as it showed in the eight months of 2013.


Drawing an analogy with the marathon runners, the Russian economy should at the last marathon breakthrough from the fifth dozen to get into the leading group. And if in sports this often happens, as professionals, using appropriate tactics, can purposefully keep themselves not in the first roles to put down the vigilance of rivals, then with the economy (and not only Russian), this option can be simply excluded, given its current state. What is it, this state?

If you believe the statistics of the same Ministry of Economic Development, then the last recorded GDP growth in the country was determined already in July. At the end of the second summer month, the economy grew by 0,2% (well, at least that way) (2,4% in average annual equivalent). In August of this year, growth was 0%, in other words, no growth was demonstrated at all. Now it is worth summing up September, but so far the results do not officially represent. In the ministry itself, this is motivated by the fact that it is “still too early,” but outside economists have other considerations on this matter: in September, growth could also be zero (as in August), and the worst case the economy could have declined. Indirectly, this fact was confirmed by Dmitry Medvedev, speaking at the XII International Investment Forum in Sochi. His phrase: 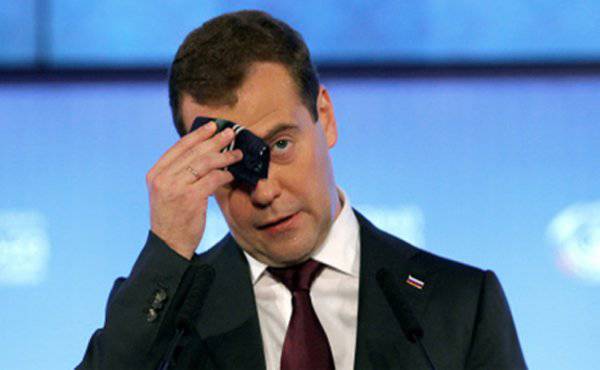 The phrase “expert pessimism” can be deciphered as “and there’s nothing to think about 3,6 percent growth predicted at the beginning of the year. At least at the current value to stretch.

Experts, including those who continue to believe in the Russian financial and economic system, now predict only 1,8% of GDP growth for the year. What is 1,8%? In fact, this is nothing ... A value that fits into a mathematical error. However, this value still needs to be reached.

Prime Minister Medvedev at the same Sochi forum announced that under the current situation in which the Russian economy is located, the danger of zero growth is close.

Indeed, it is close ... Very near is looming. At the same time, it is somehow strange to hear all this from the state husband, who is one of the first in the country and is called upon to solve problems of increasing the rate of economic growth. Medvedev, on the other hand, expresses himself as if the economic model had been lined up and regulated all this time by a non-existent power, but by someone else — an unknown uncle putting extremities to the financial system like an elephant in a china shop. They say that some rogues ruled here, you know, crooks who reduced all growth to absolute zero, and now we need to do something about it ... So you, Dmitry Anatolyevich, together with another representative of the “tandem”, managed to do so. Or not? .. If not, then this is already interesting ... Who then?

It turns out that Dmitry Medvedev only states that the current state of the economy is close to stagnation, but he sees no fault of his own, like no fault of his office. The first phrase, which the Prime Minister expressed during his speech to potential investors, was of the following character: the Russian economy has long been a part of the global financial system. In other words: gentlemen from among the critics of the work of the Government, turn off! They say that the world market is to blame, and "we are here indulging in buns" only.

If the Russian economy is stuck in globalization, then we will pay attention to the state of affairs in other economies of the world in order to compare the situation. First, let's turn to the current forecast for the BRICS countries. The forecast for China's annual economic growth today is 7,5-7,6% (4,2 is more than Russian), the forecast for India’s GDP growth is 4,8% (2,7 is higher than Russian), Brazil’s GDP growth forecast is at least 3% (1,2 is higher than Russian ), similar to the Brazilian indicators in the economy of South Africa. It turns out that the growth of Russian GDP is the lowest compared to any of the BRICS countries.
Let us proceed to examine the situation with economic growth in a number of countries of the former USSR. The current forecast for Azerbaijan is 4%, for Kazakhstan it is 4,8-5%. Uzbekistan and Tajikistan are leading here with 7% growth for everyone. Many will say: well, that's all right - where, for example, in Tajikistan, the economy still has to fall? However, you can invent any explanations and excuses for this, but the fact remains: Tajikistan in terms of economic growth rates in 3,9 times overtakes the Russian Federation ...

In terms of economic growth among the republics of the former USSR, we (Russia), according to the forecasts of the IMF and the internal economic institutions of each of the states, are ahead of only Kyrgyzstan (1,4% forecast) and Ukraine (0% forecast). As they say, it’s a shame for the power ...

It is a shame not so much for the fact that one of our neighbors has overtaken Russia in terms of economic growth rates (for most of our neighbors, one can only rejoice), but for the fact that the economic policy pursued in the country in the presence of enormous natural resources, scientific and industrial potentials literally puts on all these potentials and resources is a bold cross. Instead of starting work, rolling up our sleeves, the chairman of the government announces to us that the global economy is forcing this very government to cut budget spending, and this still “should not touch” the commitments made to ensure the social sector. Like, we’ll cut the budget by 5%, but we’ll pay for everything, we’ll provide everything, we’ll build everything - you see, you just have to believe ...

Instead of starting work, we are again told that part of the public sector should be given into the hands of a private trader, who, you see, by definition, will manage this property better. That is, it turns out that at the Sochi forum the prime minister has already officially signed that the cabinet as a management structure is useless, and that the built economic system is destructive in its essence. What we, according to Medvedev, should draw from all this conclusion? Yes, the conclusion, by and large one: indispensable does not happen.

But about the "sell to private owners", so for this big mind is not needed. Sell ​​and any cook is able to ... Here to make money, earn money, pass it on to future generations - this is where talent is needed.

Ctrl Enter
Noticed oshЫbku Highlight text and press. Ctrl + Enter
We are
What is the reason for the decline in the growth rate of the Russian economy?About the airborne special forces battle group
Military Reviewin Yandex News
Military Reviewin Google News
178 comments
Information
Dear reader, to leave comments on the publication, you must sign in.