October 3 2013
69
The last day of September in Russia was “marked” by the release of an interesting presidential decree number 754. At the beginning of the material is to give the full text of this document to, as they say, more accurately identify the subject of conversation.


Bottom line: Dmitry Livanov and Maxim Topilin may throw leather suitcases against the ceiling from an excess of positive emotions, but the former head of the Ministry of Regional Development Oleg Govorun will continue to walk “under the yoke” of disciplinary action. Let’s try to figure out what prompted our president to pardon the ministers. 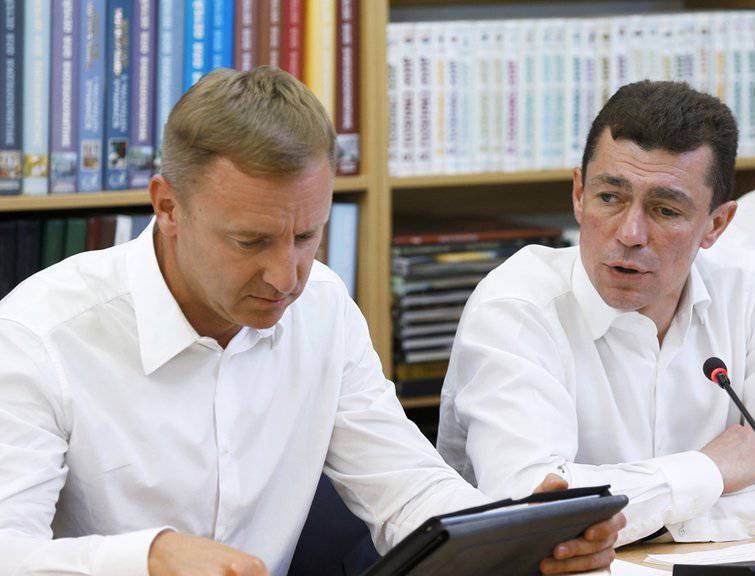 Returning to the time of reprimands designated ministers. Then - in September 2012 of the year - the disgruntled President Putin decided to discipline ministers Topilin, Livanov and Govorun for what they were, let's say, coolly attributed to the execution of his (Putin) May decrees - decrees that the President signed as soon as he was inaugurated.

Consider the points of these decrees, which are directly related to the work of the Ministry of Education and the Ministry of Labor. The Ministry of Regional Development, with its head at that time, will not touch on this material, since the Govorun, speaking in folk language, cut off a chunk ...
So here. In a presidential decree No. 599 of 7 in May, 2013 indicated the scope of work for the Government in the field of education and science. Here are some important points from that decree.

Achievement of 2016 year 100% of the availability of preschool education for children aged 3 to 7 years.

Increase in 2015 of the year of the share of the employed population from 25 to 65 years, who underwent advanced training and (or) professional training, in the total number of people employed in the field of economics of this age group to 37 percent.

Increase in 2020 year the number of children from 5 to 18 years enrolled in additional educational programs in the total number of children of this age to 70-75 percent, stipulating that 50 percent of them should be trained at the expense of the federal budget allocations.

Increase in domestic research and development expenses by 2015 up to 1,77 as a percentage of gross domestic product with an increase in the share of educational institutions of higher professional education in such expenses up to 11,4 per cent.

To ensure the development by June 2012 of a set of measures aimed at identifying and supporting gifted children and young people.

By the end of 2013, to ensure the implementation of measures to support teachers working with children from socially disadvantaged families.

It turns out that in the year since the receipt of the disciplinary sanction, the Minister of Education and Science Dmitry Livanov managed to correct all his shortcomings, for which President Putin changed his anger at the mercy of him. And what exactly is the minister Livanov corrected something? Maybe our queues in kindergartens have disappeared, maybe we have developed unique programs for working with gifted children, maybe our universities are beating all world ranking records, and teachers who work with "difficult" children no longer know what to do with the means of state support? ..
If all is true, then the Minister Livanov needed not only to cancel the disciplinary punishment, but also to submit to a high state award ... Or, perhaps, you just need to be patient, because in the clerical depths a decree about his award is being prepared, about which the Russian public will soon should be informed (well, how about awarding General Makarov with a star of the Hero of Russia in 2012, for example) ...

Requirements were also put forward regarding the work of the ministry headed by Maxim Topilin. Among others, there were some: take all measures, in order for 2018 in Russia, on average, labor productivity increased by 1,5 times, the share of high-tech sector increased by 30% of total GDP indicators, 25 million modernized jobs were created.
Considering these presidential requirements, it turns out that the work of Maxim Topilin (even immediately after the minister made a proposal to deprive the unemployed Russian citizens of free medical care in order to attract them to work and pay taxes) fully complies with the requirements of the highest federal authorities. It turns out that the modernization of jobs in Russia is in full swing, the knowledge-intensive sector “gives the country coal”, and labor productivity is growing so that the Chinese and Singaporeans are only jealous of us ...

Then the Minister of Labor and Social Protection also needs to be submitted to a high state award with the casting of a bronze bust and the subsequent installation of this bust upon entering the Government building ...

In general, the ministers are forgiven by the president, and this means that they will have to take up the work of everyone in their sector with triple enthusiasm ... Well, here ... And we are here (and not only us), you know, argued that it was time for Livanov to resign after all his reform perturbations. It was argued that it was time, from the Minister of Labor, to ask exactly where the modernization of workplaces proceeded (in the meeting hall of the Federation Council or in his personal office).

Not! Still, we do not understand anything either in sensible ministers or in the principles of their work for the benefit of the people and the Fatherland. There is no limit to our dullness and backwardness ... Ministers first received disciplinary penalties for failing to comply with presidential orders, then these penalties were lifted for the same failure to comply with presidential decrees. We are definitely not able to master such a "quantum" logic ...

Ctrl Enter
Noticed oshЫbku Highlight text and press. Ctrl + Enter
We are
Results of the week. “We won't give you the keys! We're not Pinocchio! ”Military doctrine of the Russian Federation
Military Reviewin Yandex News
Military Reviewin Google News
69 comments
Information
Dear reader, to leave comments on the publication, you must to register.