What lies behind the pseudo-Muslim screen, or guest radicalism in Moscow

October 2 2013
229
Last weekend on the Web, namely on Youtube, a video appeared and quickly spread around Runet. This is just a three-minute video, the title of which “Military Review” will not bring, in order not to organize advertising for him. To make it clear what the explicitly provocative video is about, we will provide its text description in this material.


After the completion of the traditional prayer, believers begin to leave the door of one of the mosques located in Moscow (Otradnoe). Everyone begins to descend from the steps and disperse, when suddenly a young man, dressed in a black jacket and a black hat, separates from the crowd, and in bad Russian begins to “broadcast” about how hard it is for Muslims to live in Russia, as Muslim women do not allow Hijabs, as representatives of the Russian special services, are killing "innocent brothers" in the North Caucasus. Already at the end of the first minute of his “preaching” a young man, to whose words the crowd began to listen, issued the main thesis of his speech: Russia is an unfriendly state towards Islam, and the “brothers” should understand this.

After that, the first exclamations “Allah Akbar!” Sounded in the crowd, which suggested that either a young man in this very crowd managed to place peculiar heralds in different parts of it, or the crowd managed to perceive the “speaker” as a “speaker”. 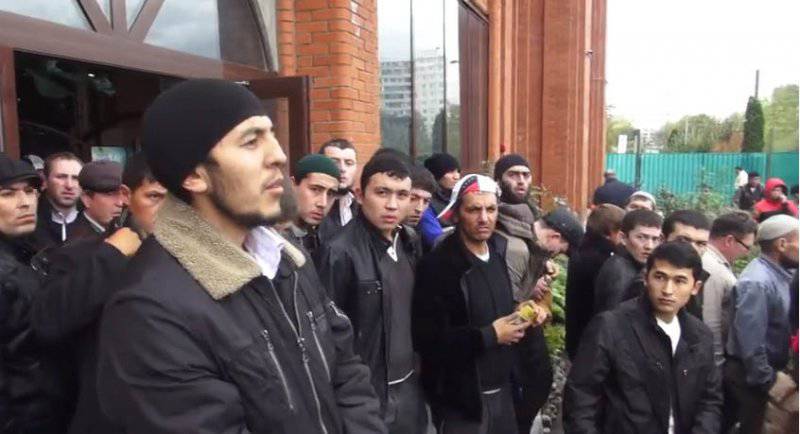 Next, the speaker touched historical retrospectives, “telling” the audience that at one time in Russia people threw into the rivers those who did not want to abandon the Muslim religion, and that Russia needs to be punished for this today. Continuing his speech, the young man, moving from Russian to Arabic and vice versa, trying to quote the Qur'an, reminded spontaneously gathered that “an Islamic caliphate is not far off,” and that the “brothers” should help the caliphate as soon as they can. About a hundred people with half-open mouths looked at everything that was happening, some took out mobile phones and began to take a “speaker” on video, five or six people tried hard to enrage the crowd with cries of “Allahu akbar!” It didn’t work out particularly well, people began to slowly reach out from the territory adjacent to the religious institution, but the main goal - a provocative throw-in - was already achieved.

It would seem that only, forgive, my God, there is no content in YouTube, and why you should pay attention to the essence of this three-minute provocative video. The reason is simple: radical puppets, who clearly behave in a staged manner, bringing other people's words and appeals to people, and trying with all their might to identify themselves with the faithful Muslims, having nothing in common with them, are doing everything to organize a clash of entire confessions and ethnic groups foreheads. They do everything to provoke large-scale chaos, capable, like an explosion, to be born after even the smallest spark jumps. Is it possible to turn a blind eye to this? I think no. It is impossible not only because it happens in the center of Russia, but also because people are ready to listen to lies, hanging their ears and opening their mouths, perceiving outright lies as pure coin.

The described “speaker” did everything according to the laws of clumsy, but no less effective, provocation: the beginning was about the murder of the “brother”, the continuation was about “persecution of Muslims in Russia”, the end was calls to action. Muslims who are well acquainted with writing (not through third mouths and ears) and the real geopolitical situation in the country will send this speaker to three Russians and funny ones. But people who are used to accept only interpretations will become fertile ground for such preachers. Is it not after such “express sermons” that people find themselves in the camps for training terrorists? Isn’t it not after these speeches that they tie themselves with death belts and go kill those who “belittle the Islamic faith”?

We must not forget that the purpose of this video is not only the one hundred people gathered in the courtyard of the mosque, but also millions of Internet users. Already (in just a couple of days of his presence on the Web), more than 18000 people watched the video (this is only on Youtube), a certain percentage of whom “liked” the “express-preaching”. Radicals are doing their job, trying to powder the brains of numerous Russian (and not only Russian) Muslims with the lie that Russia is putting pressure on Islam. And the more “likes”, the more chances for radicals to recruit new cannon fodder for cloning chaos around the world. Only those users (viewers, readers, listeners) who are very far from both the ideas of Islam itself and in general from common sense can believe in the “noodles” that Muslims are oppressed in Russia.

In Russia, according to studies of sociological services, 7% of the population call themselves Muslims - more than 10 million people. Representatives of the Muslim clergy say that this figure is somewhat underestimated, and that the real number of Muslims in the Russian Federation is at least 60% more — over 16 million people (every 9 is Russian). The number of mosques and Muslim centers in the country has grown more than 22 times in the last 70 of the year! Muslim clergymen, representatives of other religions systematically meet not only with each other, but also with representatives of the authorities, conveying to them their vision of solutions to various problems.

What does the phrase “Russia is an unfriendly state in relation to Islam” mean if Islam is one of the mass religions in our country ... The thesis “Russia attacks Muslims” is akin to the thesis that a person constantly beats his arm or leg they don’t like it to me ... Obviously, all these words are aimed at those who, to put it mildly, are not familiar with the ethnic and confessional composition of our country, who are little acquainted with anything, cooking in their porridge seasoned with radical provocateurs and the desire to find is possible for self-expression.

PS I would like to contact the moderators and administrators of the www.youtube.com service that hosts the frankly extremist video: guys, you turned off the comments on this video - well done, but what prevents you from deleting the video itself is the video garbage, which can eventually lead to such consequences, from which entire regions of the world are shaken. The corresponding request (already with an indication of the video that incites interfaith strife) was sent directly to Youtube. After 5 hours after the request, the video was not deleted.

Ctrl Enter
Noticed oshЫbku Highlight text and press. Ctrl + Enter
We are
Countries that allowed women to fight and kill (history in 19 photos)"Army-2015". "Military Review" on the forum. Announcement of reports
Military Reviewin Yandex News
Military Reviewin Google News
229 comments
Information
Dear reader, to leave comments on the publication, you must to register.