The Supreme Headquarters will appear in Moscow in case of war 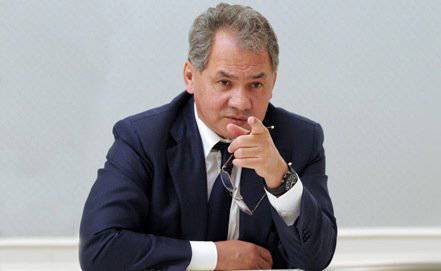 By the end of 2014, it is planned to create a National Center of State Defense - the Supreme Headquarters of the Supreme Command in case of war in the building of the Ground Forces Main Command on the Frunze Embankment of Moscow. This was announced today to journalists by the Minister of Defense of the Russian Federation, Army General Sergei Shoigu.

“We intend to make the main office of the Ministry of Defense on Frunzenskaya Embankment. It will be the main office not by the number of cabinets and their quality, but by its functionality,” the Minister of Defense emphasized. “We began to create the National Center of State Defense, which will include three components: management of strategic nuclear forces, the Center for Combat Control and the Center for the daily operations of the Armed Forces. "

Answering the question whether the Central Command Center of the General Staff of the Armed Forces of Russia will enter the National Center of Defense being created, Shoigu said: "The General Staff Center will be one of the components of this center of defense, and not the biggest one."

The Minister of Defense also explained that the National Center of Defense of the state will lead the activities of not only the Armed Forces, but also other security agencies of the country. Answering the clarifying question whether the new supreme control body would lead, besides the Armed Forces, other power ministries, Shoigu said: “Yes, it’s absolutely the right question. Of course it will. For the time of the war, this will be the Supreme Command headquarters, the highest defense structure of the country, a management tool special period economy. "

"The national center of state defense is planned to be commissioned at the end of next year," the minister said, adding that this would require accomplishing a huge amount of tasks to saturate him with the latest computer equipment and software.

“Now it’s impossible to manage a slide rule, having gathered around a thousand and a half officers around it, this time has been irretrievably gone,” Shoigu said. He also said that in addition to other modern technical equipment, the National Center of Defense of the state will be equipped with a helipad, without specifying exactly where it will be.

Ctrl Enter
Noticed oshЫbku Highlight text and press. Ctrl + Enter
We are
In the Strategic Missile Forces will test the new simulator for duty shift TsKPIn the center of Moscow a nest of “aliens” appeared: the installation with the eggs of the “fifth column” was exhibited in Novopushkinsky Square and at the editorial office of Echo of Moscow on the New
Military Reviewin Yandex News
Military Reviewin Google News
2 comments
Information
Dear reader, to leave comments on the publication, you must to register.