Medvedev proposes to tighten the belt on 5%?

27 September 2013
213
Earlier this week, Prime Minister Dmitry Medvedev decided to hold a meeting with representatives of the Upper Chamber of the Russian Parliament on the layout of the federal budget, which promises to go in the direction of cutting social spending. Senators came out of their vacations, reviewing photographs of rest on distant shores of exotic countries on iPhones, eating tiramisu, admiring the results of large-scale repairs in the building of the Federation Council, comfortably settling in new chairs, and their plans clearly did not include a discussion of something sharp and negative. Of course, when leather armchairs, tiramisu, euro-repair and memories of "all inclusive", then somehow it is not at all to talk about the budget, which upsets the nerves and stomach. But the conversation still took place.


Dmitry Medvedev announced to a narrow circle of senators that the government had already approved the main financial document of the country, calculated for 2014-2016 years, and announced that the Parliament should also step in with the cabinet, expressing approval to the document. Already by the beginning of October, the budget project will be sent to the Lower Chamber, and if it receives approval (which there is no doubt about it - note by the author), then it will go to the Federation Council, where senators should also put their likes on the document.

So what kind of document does Dmitry Medvedev call for? Let us try to understand, based on the words of the Prime Minister himself, as well as on the current economic situation in Russia.

The prime minister himself, describing the budget project, calls it "the most difficult in recent years." What is the difficulty? It turns out that in the new draft of the state budget there is a need to cut spending by about 5%. At the same time, it is announced that if the state of the Russian economy deteriorates, the reduction may exceed the specified value. 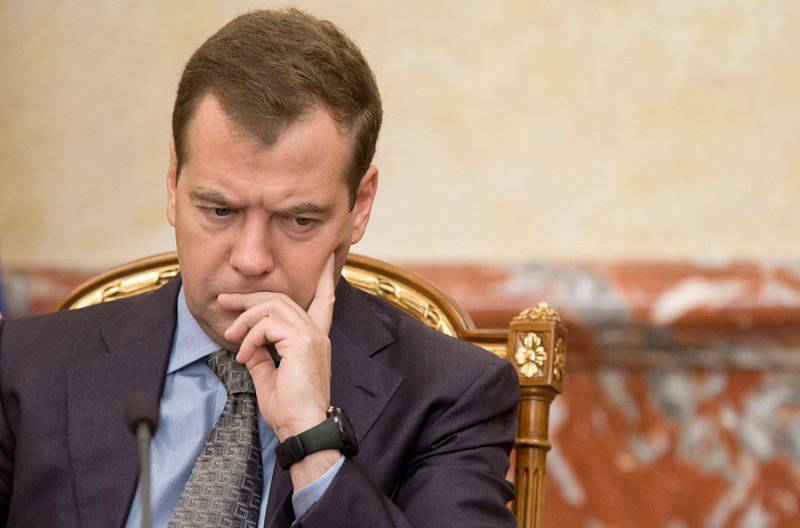 The budget is very difficult, the most difficult in recent years, as well as the situation that has developed in the economy. Now we have no crisis, but there is no development, and we are at a rather difficult point, when recovery growth is over, we don’t have previous incomes, foreign markets are closed to a large extent, and the budget needs to fulfill the huge social obligations we have undertaken in recent years.

The prime minister recalled that when forming the budget, his expenses were reduced by almost all items by 5 per cent, but based on his own quote, it turns out that the cuts are expected by that part of budget expenditures, which concerns the fulfillment of social obligations.

I hope that after we carry out the reorganization of our Armed Forces, we will be able to reconfigure budget spending somewhat, and then a faster growth in spending on education, health and science will begin, the head of government said.
Let us try to translate abstract percentages into concrete rubles and draw on this basis a conclusion about how much financial resources the Russian government lacks in order to fulfill social obligations.

On 2013, the expenditure part of the state budget is set at the level of 13,38 trillion rubles. In 2014, expenses are planned at the level of 14,2 trillion rubles. It turns out that the government proposes to cut the state budget in its expenditures in the amount of 670-710 billion rubles (for the year). At first glance, the sums really look impressive, and it seems that it is difficult to find such funds in the bins of our Homeland so that both the rearmament of the army according to the plan and the work of state-financed organizations can be maintained at the proper level, and pensions with benefits are not paid in full. give in transcendental gave rush.

But this is only at first glance. If you look closely at the formation of the Russian treasury today, you can see more than 50% of its formation based on oil and gas revenues. That is, more than half of the income comes from the sale of gas and oil.

At the same time, budgets of the past years were made up, being tied to the current prices for a barrel of oil (today to the average price of late). At the moment, the price of a barrel of oil at the level of $ 90-91 per barrel is determined as such a base price. However, the last time the price in 90 and less than dollars per barrel in the world market was fixed more than 2,5 years ago. For several months, the price of "black gold" was in the corridor from 105 to 112 dollars for a "barrel". It turns out that only for the last 2-2,5 of the year, the Russian treasury from the sale of oil received 16-24% more revenue than expected at the time of the adoption of the budget. According to forecasts for 2013, Russia should have sold abroad crude oil at the level of 145-150 billions of dollars. This level has already been reached (as of September 2013). Revenue growth due to high oil prices for the year will be at least 800-900 billion rubles.

We recall that our government lacks 670-710 billion rubles annually (for the next three years) to implement social obligations. It would seem that with uncomplicated mathematical calculations it is possible to conclude that with the help of super-profits from the export of crude alone, you can not just cover all this “deficit”, but even think about the implementation of other projects, because there are still 100-200 “extra” billions .

But can simple mathematical calculations keep up with the “triple indefinite integrals” of economists of our cabinet of ministers? If Dmitry Medvedev said that “we don’t have the same income,” it means that the deputies should believe the chairman of the government and participate in sequestering the budget to the delight of Kudrinsky economists. And for these economists, there is only one way to use the super profits coming to the treasury: to put money into a eurodollar capsule, from which to take money "before the crisis - no, no ..."

By the way, about a jug (Reserve Fund). Not so long ago, President Putin proposed to print this fund and use a certain part of its funds for the development of infrastructure projects (construction of roads, bridges, seaports, etc.). It would seem that the decision is more than a sound one. But here there is one important nuance that cannot be passed. Financial resources of the Reserve Fund are placed in foreign currency under the meager 0,7% per annum. At the same time, the Russian authorities declare their desire to attract foreign investors to the development of the Russian infrastructure, who can receive tax and other preferences up to 8,5% per year. It turns out that we give money to the “American uncle” in debt for ridiculous 0,7% and themselves call upon this “uncle” to invest in our projects with input savings in 8,5% per annum only ... Of course, Russia will lose its billions from such a strange manipulation dollars without taking the first step to the beginning of the implementation of infrastructure projects. But are these billions of their own if they are kept by that “overseas uncle”? .. Another “triple integral”, which even prominent mathematicians will not be able to “take”. Therefore, we will not be surprised if American or European companies or banks express a strong desire to participate in the “investment” in the construction of Russian seaports.

We are talking here about the super-profits to the Russian treasury from oil exports, which could cover the 5% deficit mentioned by Medvedev, but at the same time we forget that Russia is a unique state where only 30% of direct sales revenues go directly to the budget oil (in oil-producing Norway, for example, this figure is close to 80%). And these 30%, as already noted, fill the budget by more than half. Where do 70% go? - Yes, all in the same funds and other "institutions" are returned to oil giants for "development." This alone immediately cuts off the opportunity to prepare a “tight patch” for the future budget. So maybe the government and deputies should not think about reducing the funding of social programs, but about revising the use of oil and gas revenues towards efficiency? It would be strange to assume that such a thought did not enter the heads of government economists. It turns out that she came, but they decided to replace it with the thought of reducing social spending. This is much more convenient and faster to implement - chick - and you're done! They pressed the buttons - and forward - to stories that the treasury lacked funds.

PS While the government is calling for a “difficult” budget project, capital outflow from Russia over the past year amounted to $ 70 billion (according to Vladimir Fedotkin, representing the State Duma Committee on Budget and Taxes), $ 65 billion (estimated by Finance Minister Anton Siluanov). More than 8 billion rubles were stolen under the wing of the Oboronservis structure, 39 billion rubles. disappeared from the accounts of "Rosagrolizing", and there is still "Olympstroy", "Resorts of the North Caucasus", etc., etc.

Well, "on the little things" - repair of the meeting room in the building of Sovfeda cost the state treasury 150 million rubles ...

Ctrl Enter
Noticed oshЫbku Highlight text and press. Ctrl + Enter
We are
"All inclusive". Turkish Fleet OverviewResults of the week. “Yes, everything is so. Everything! They saw, condemned, waved, potryndel, smoked - and that's all. And everything is so ... "
213 comments
Information
Dear reader, to leave comments on the publication, you must to register.