27 September 2013
216
Exactly one month remains to “presidency” Mikhail Saakashvili. October 27 2013 in Georgia will pass presidential elections, after which this politician, whose independence has long been uncaused, will leave his post, freeing him for, let's hope, the politician who will not put bloody experiments on relationships among entire nations. The rating of Saakashvili himself inside Georgia reached a minimum and, according to estimates, the Georgian independent statistical services, is no more than 16%.


However, for Saakashvili, fatal political failures during his presidency and, most importantly, the negative assessment of this presidency by the majority of Georgian citizens, painfully hit his ego. A person with some pathological fanaticism is trying to declare that, despite the negative assessments of his activities by the majority, his work must be recognized as good for the Georgian people. The painful "ego", as they say, falls out of all cracks, forcing the outgoing Georgian president to demonstrate the next clinical cases.

One of these cases occurred just the other day, when Saakashvili was behind the podium of the UN General Assembly. Many of those present (well, those who heard the name “Saakashvili” at all) imagined in what way the Georgian “lame duck” would give a speech, but few expected that Saakashvili would turn his speech into such a “clinic”. 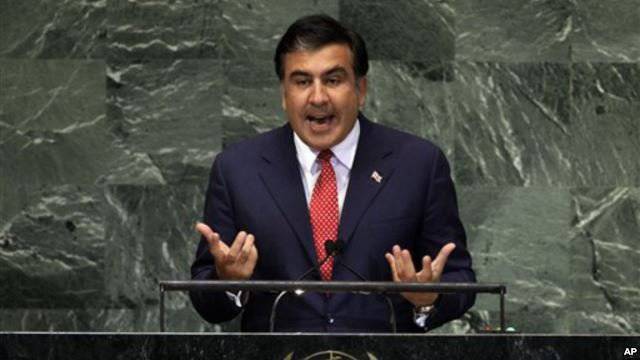 The impression was that Saakashvili did not give a speech, but told his own history diseases. I would like, of course, to cite the inventions of Mikhail Saakashvili, which he presented to those gathered at the General Assembly, completely, but these fabrications are so extensive that they cannot fit into the format of a regular article. And in general, there is an opinion that not every reader will be able to calmly listen (finish) what the Georgian president still managed to say in New York. Here, for example, the Russian delegation to the UN was unable to listen, or rather, did not listen to Saakashvili at all, retiring from the hall in order to preserve their nerves - they will still come in handy for our delegation to the UN (“Saakashvili” come and go, but the Russian delegation remains ) ...

So, the speech of the Georgian president behind the UN podium was made. If readers have a desire, then its full version (in English) can be found. here.

We will discuss here certain moments dedicated to Mikhail Saakashvili of Russia and its place in the modern world ... And if we consider that the speech of the Georgian president can be broken down into only two thematic clusters (“what a Saakashvili, wonderful president” and “What a terrible Russia” is) then there will definitely not be any special meaning losses from this.

Saakashvili began by saying that he was pleased to represent "his beloved nation" on this podium. And this statement alone can only be called cunning. To represent "your favorite nation" is to represent its majority. And if to take into account the mentioned rating of Saakashvili, then the majority in his case does not smell at all ...

Then Saakashvili switched to the autopilot mode and began to explain to the assembled people that they needed to love and admire with all their might a Western civilization that brings peace, freedom and democracy. Many wondered what he was about ... But Saakashvili gradually entered into a rage:

If the West is outdated, then why do millions of Poles, Czechs, Estonians, Romanians and others thank the day of their entry into NATO? Why are millions of Ukrainians, Georgians, Moldovans and representatives of other nations desperately knocking on the doors of the European Union?

Eastern European countries seeking to join the European family of free and democratic countries face constant pressure and constant threats. Armenia was driven into a corner and forced to sign an agreement on joining the Customs Union, which is not in the interests of this country and not in the interests of our entire region. Moldova is in blockade, Ukraine is under constant attack, Azerbaijan is facing extreme pressure, Georgia is occupied.

Why? Because the old empire is trying to return the old boundaries. And “Borders” is actually not the right word, since this empire - be it the Russian empire, the Soviet Union, Russia, or the Eurasian Union - never had any boundaries. Instead, there were only fields.

I came today to speak on behalf of these fields. Unlike most countries, Russia is not interested in stable states around it.

It's great, isn't it ... This has not yet expired the first minute of the “flight”, and Mikhail Nikolozovich has already brought the autopilot to the old course, on which he is constantly fledging. Well, at least there is an understanding that Saakashvili is not friendly with the skull filler, other people’s ideas are trying to make friends with this filler, turning the Georgian president himself into a “talking head” ...

“Ukraine is under constant attack”, “Armenia has been driven into a corner”, “Azerbaijan is facing constant pressure”, “occupation of Georgia” - yes, from all this, it blows somehow, excuse me, “bushism” and “McCainism”, and in general, the rhetoric of the terry bloom model of the Cold War. All that was missing was an evil empire-style dogma to finally make sure that Saakashvili, under the power of potent drugs, was stuck for about a year in 1983 ...

The drugs did not let go, heightening the action, and further Sakashvili stated that he was proud of Georgia, which is the only country in the world that was able to "survive" and "remain independent" after the Russian attack in 2008.

Saakashvili again forgot to remind the audience of the result of an independent investigation, which was received by European experts about the beginning of the conflict in South Ossetia. And in this investigation, the name of the Georgian president was mentioned, who in August 2008 broke all international agreements and ordered to attack not only civilians of the RSO, but also peacekeepers. He gave the order under the strict guidance of "George's friend," as Saakashvili himself later admitted in one of the interviews.

Now the Georgian president, speaking at the General Assembly tribune, apparently thought that everything about the report and his confessions had been forgotten. However, his opinion was clearly erroneous, and the attempt to control Russia once again sparked talk about the mental state of Saakashvili.

Diplomatic Alexander Lukashevich (Foreign Ministry spokesman) said, quote:
... the Russian delegation left the hall of the UN General Assembly in disagreement with the assessments of Saakashvili, which he broadcast.

"Translated" - what a precise term! Indeed, Saakashvili was perceived by many at the General Assembly not as a speaker, but as a translator, or even a repeater, because many people remember very well how Saakashvili ended up in power, who helped him in this, and whose dogmas he operates on ...

Vitaly Churkin, Russia's permanent representative to the UN, spoke much more substantively about Saakashvili's speech:
This time it was not even a speech, but a set of delusional fabrications that were not just anti-Russian, but Russophobic and anti-Orthodox. Fortunately for the Georgian people, the end of the political career of this person is close, whose mental state requires professional evaluation.

Then Saakashvili, losing his last connection with reality, became thoughtful about how wonderful his presidency was for Georgia. According to him, Georgia managed to defeat corruption (no more, no less - author's note), to make Georgia the first country to decriminalize in Europe (this is after published torture in Georgian prisons - author's note) and the most attractive country in Europe for foreigners. Investors (megalomania is obvious - author's note). It followed from the speech that he would have done even more if it were not for Russia and not Putin personally. As they say, they came ... The search for the guilty began.

It makes me sick when KGB officer Vladimir Putin presents lectures on freedom and democratic values ​​to the world. It forms the Eurasian Union as an alternative to the European Union. This project is a new Russian Empire. We must go the other way - to revive our age-old traditions, which will lead us into a world called Europe.

You see, sick of him ... Well, why didn’t Saakashvili declare to the delegates that the majority of Georgian citizens are sick of himself, and that many thousands of demonstrations have been gathering in Georgia over the past months, which called for this "talking head" to leave his post ahead of time and not unnerving people.

Saakashvili’s next tirade was words for which other people could have been slapped in the face, to put it mildly, but we recall that Saakashvili’s illness is progressing. The President of Georgia announced that the Georgian Parliament and he personally recognize the genocide of the Circassian people, who (the Circassian people) were destroyed by the Russian authorities, because they needed Circassian lands. Saakashvili called this “event” the most tragic page in world history.

And at the end, as the apogee of narcissism, bordering on something from the category of political psychopathy:

When I came to power in Georgia, I was the youngest president in the world.
I am proud that many achievements of Georgia were achieved during the years of my presidency.
I worked tirelessly.
I understand that the value of many achievements is very high.

The end of the performance ... The clown leaves the stage ...

PS In the speech of the Georgian "lame duck" the words "Russia", "Soviet Union", "Russian", "Putin", "Moscow" and "Kremlin" were about twice as many as the words "Georgia" and "Georgians" ... Who about what, and dirty about the bath.

Ctrl Enter
Noticed oshЫbku Highlight text and press. Ctrl + Enter
We are
Results of the week. “She is not a Jew to me, not a Jean!”Preliminary evaluation of the prototype of the unobtrusive Chinese fighter Chengdu J-XX [J-20]
Military Reviewin Yandex News
Military Reviewin Google News
216 comments
Information
Dear reader, to leave comments on the publication, you must to register.